Tomorrow, the remastered version of the one of the best-loved adventure games of all time hits PlayStation Network: Grim Fandango. While adventure games might seem like a relic of the past to some, they’re an important part of gaming’s history, and also a genre that continues to be relevant today. Telltale Games is the most obvious studio making inroads in this genre these days, with The Walking Dead, The Wolf Among Us, and more in their portfolio.

There are plenty of examples of great adventure games. Here are eight of our favorites to pass the time with once you’ve finished up Grim Fandango Remastered. Some of them aren’t exactly easy to lay hands on nowadays, but if you can, they’re worth the effort. 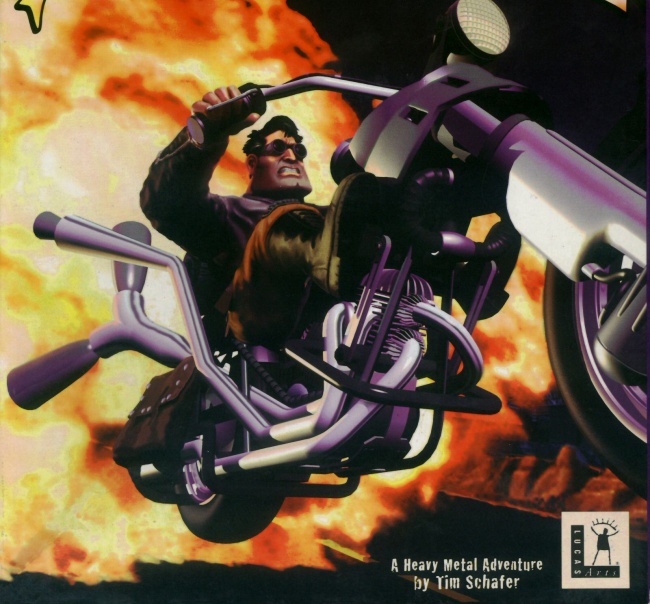 It seems fitting to start the list off with another Tim Schafer-developed title. Full Throttle is set in the year 2040, in a world where motorized vehicles are being replaced by anti-gravity hovercrafts. The main character, a biker named Ben who leads a gang called The Polecats, ends up trying to save the last domestic motorcycle company from being turned into a minivan manufacturer by its evil vice-president.

This one is really hard to find, as none of the digital sites have it yet. You might get lucky on eBay. 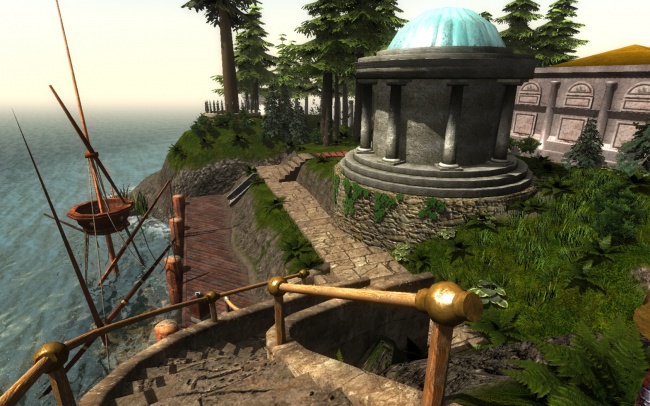 Myst is one of the better-known adventure games of all time, and it’s been in my head recently thanks to The Talos Principle. While the two aren’t closely related, the first-person perspective of Talos recalls Myst to my mind every time. Myst is also a bit of an outlier for adventure games. Almost all of its interaction is non-verbal, there are really no “enemies,” and you don’t die – you just lose. There are also no obvious objectives. You simply explore, solve puzzles, and try to find your way off the island. It’s a great concept that can be both amazing and frustrating.

Want to try Myst out? You can get it at GOG.com. 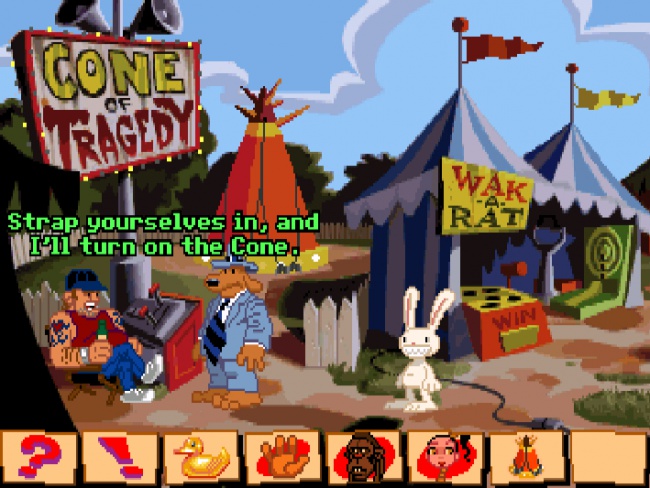 Telltale Games didn’t pop into existence with The Walking Dead. They’ve been around for years, and one of their best early works is the Sam & Max series. Starring a dog and a rabbit as a pair of enterprising detectives, Hit the Road sends the duo on a hunt for a Bigfoot and a Giraffe-Necked Girl who have gone missing from a carnival. The pair cross the US, eventually solving the mystery in their own unique way.

You can get your hands on Sam & Max Hit the Road on GOG.com. 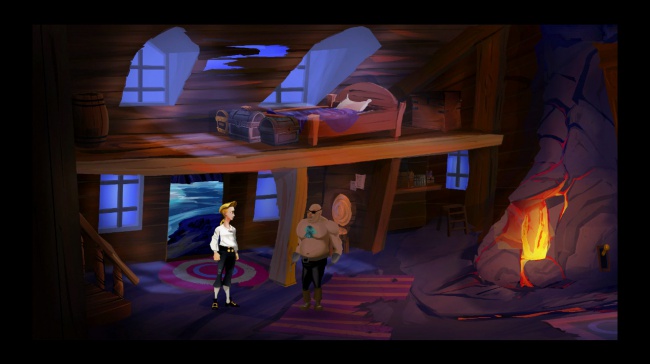 The Secret of Monkey Island

Ron Gilbert, David Grossman, and (who else) Tim Schafer teamed up to create The Secret of Monkey Island, a story about a young man with the awkward name of Guybrush Threepwood. Guybrush wants to become a pirate, but as he tries to complete the three trials to do so, he encounters all sorts of problems. Voodoo priestesses, a used boat salesman, a man with hooks for hands (aptly named “Meathook”), and even Ghost Pirate LeChuck set themselves between the boy and his goal.

Grab The Secret of Monkey Island on Steam! 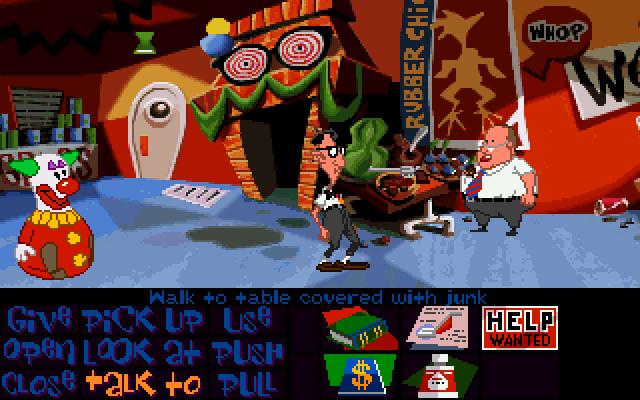 Day of the Tentacle

Another Tim Schafer effort (seriously, did that guy make anything besides adventure games back then?), Day of the Tentacle is the sequel to Maniac Mansion, but it’s not just a follow-on. The tone of the game has become decidedly more humorous and the graphics are more cartoon-like, giving Tentacle a much different feel than its predecessor. As Bernard (the main character), you’ll travel through time in an attempt to stop the Purple Tentacle from becoming the ruler of the world. The best part about the time travel is that your actions in the past can be seen in the future, once you get there.

Obtaining Day of the Tentacle is tricky, as it’s not on Steam, GOG or any of the other sites. Check your old-school gamer friends’ closets. 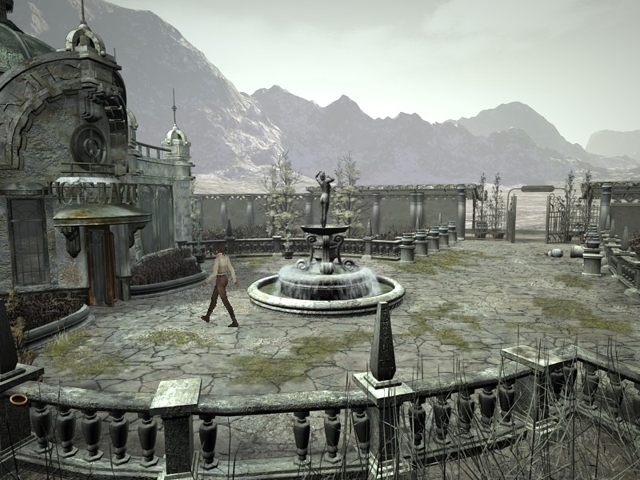 Syberia is the story of an American lawyer named Kate Walker who is attempting to finalize the takeover of a French toy factory from the family of a recently deceased woman. Instead of a simple process, she finds out that she must track down the woman’s long lost brother to complete the deal. This leads Kate to all sorts of adventures, including flying an airship, dealing with an animatronic train engineer, and more.

You can check out Syberia over at GOG.com 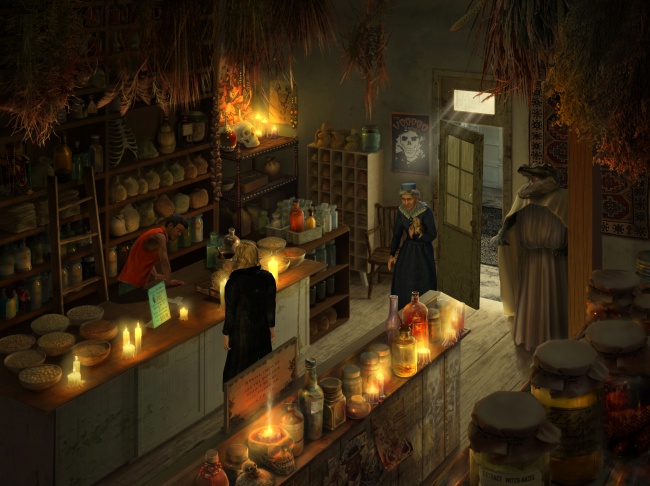 Gabriel Knight: Sins of the Fathers

Recently remade by the folks at Phoenix Online Studios, Gabriel Knight: Sins of the Fathers tells the tale of a nearly broke horror novelist who lives in New Orleans. As he’s following “The Voodoo Murders” in the hopes of basing a novel on them, he discovers his supernatural past, and his heritage as a modern-day Inquisitor. It also features an outstanding cast of voice actors, including Mark Hamill, Tim Curry, Leah Remini, Michael Dorn, and Efrem Zimbalist, Jr.

You can check out the 20th Anniversary Update of Sins of the Fathers at the Phoenix Online Studios official site. 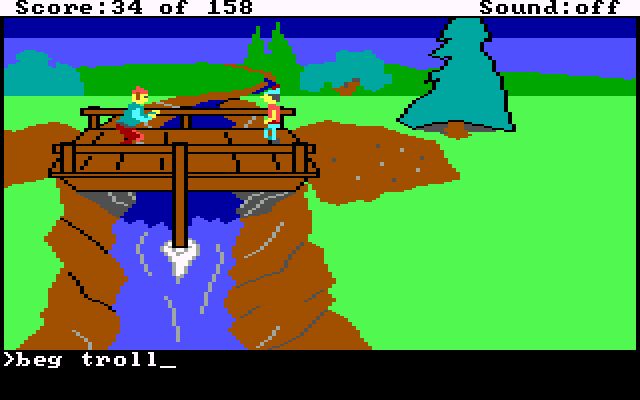 King’s Quest: Quest for the Crown

King’s Quest: Quest for the Crown tells the story of Graham, a knight in the service of the Kingdom of Daventry. With the fate of the kingdom hanging in the balance, King Edward sends his bravest knight – Graham – to retrieve three precious treasures which had been taken from the castle: A mirror that tells the future, a shield to protect the wearer against danger, and a chest that is always filled with gold.

You can grab Kings Quest: Quest for the Crown on GOG.com, or you can download the free remake of the game from AGD Interactive here.