Hearthstone, like its physical card game counterparts Magic The Gathering and Pokemon, occasionally runs into balance issues. A card that when used in a certain way with a specific combination of other cards becomes so powerful it breaks the game. In the real world, these cards usually end up on the ban list, but in Hearthstone‘s case, it’s possible to “nerf” the card with an update just like any other video game. Sometimes, though, they go a bit too far. Here are the biggest nerfs in Hearthstone‘s history. 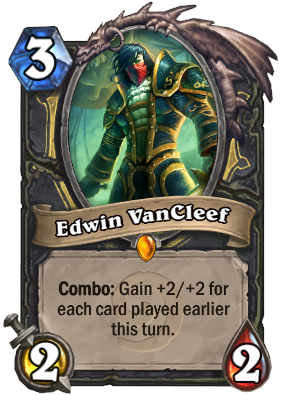 Edwin VanCleef was initially a very popular card for combo rogues back in the game’s beta. When first released, it was only a 1/1 but it had stealth, meaning it was quite easy for rogues to bide their time, and then build up an unstoppable monster VanCleef by playing him in combination with a lot of cheap spells. The nerfhammer hit this card by removing its stealth, and gave us an almost slap-in-the-face compensation by buffing its base stats to 2/2. The loss of stealth made the card vulnerable to many of the game’s hard removal cards, such as Big Game Hunter, Hex, Polymorph, and Siphon Soul. It’s now only really played as an arena curiosity. 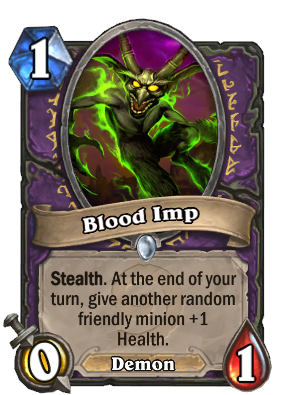 Blood Imp was another card hit by a nerf in the game’s beta. Initially a 1/1 with stealth that read “your other minions have +1 health”, it was a no-brainier in a lot of warlock decks, particularly the board-flooding zoolock, as it ensured that your early-game minions would win trades with your opponent’s. With the nerf, the card now simply gives 1 health to a random minion, and removes its attack capability, rendering the Blood Imp practically worthless. 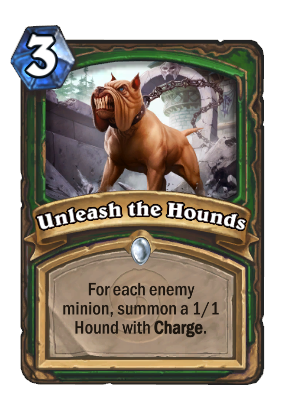 There are few cards in Hearthstone that have been changed as much as Unleash The Hounds, but, somehow, it is one of the only cards on this list to survive the nerf and still be regularly used in play. Initially having a completely different effect (giving your beasts +1 attack and charge), it was re-worked to its current card text in the beta, but given a 4-mana cost. The cost was reduced to 2, and then finally nerfed to 3 for its current iteration. Though no longer the one-hit-KO card that it used to be, Unleash The Hounds still has a place in a lot of hunter decks. 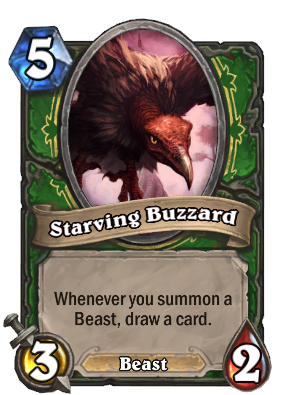 In stark contrast to Unleash The Hounds, Starving Buzzard was nerfed into oblivion. Originally costing just 2 mana, Starving Buzzard, when used in combination with cards like Unleash The Hounds, was an incredibly powerful solution to the face hunter’s problem of running out of cards. At first nerfed to have just 1 health (so mages could ping it), Blizzard went full Blizzard on Starving Buzzard, giving it a massive 5 mana cost (compensating its stats by a 3/2 increase). Needless to say, the card is now almost never used in any kind of deck, especially when there are much better alternatives for card draw like King’s Elekk and Quick Shot. 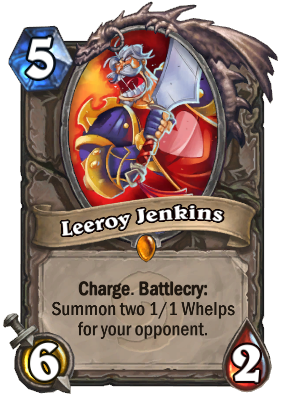 The infamous Leeroy Jenkins had his heyday back when Warlocks were able to summon him, Power Overwhelm him, and then duplicate him with Faceless Manipulator for a whopping 20 damage to face from a completely empty board. Rogues, in combination with Shadowstep and Cold Blood could use him to dish out 26 damage – which was basically a one-hit-KO. Leeroy’s nerf was small, but substantial, bumping his mana cost up to 5 instead of 4. This meant that he was still useful as finisher, but some of the most ridiculous combinations could no longer be done. 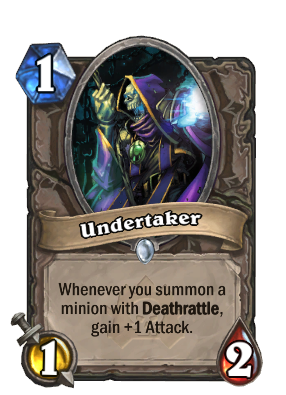 Undertaker, along with Baron Rivendare was Blizzard’s attempt to get people to make decks built around the “deathrattle” effect. It worked all right, but perhaps a little too well. Undertaker’s original effect gave it +1/+1 every time a deathrattle minion was played. It meant that on turn 2 (or turn 1 with coin) you could play an undertaker and a Leper Gnome, giving you a 2/3 and a 2/1. If the Undertaker wasn’t removed, he would quickly spiral out of control and become an unstoppable force. It was crazy, considering he only costs 1 mana. His nerf meant that he only gained attack (instead of attack and health) with each deathrattle minion, but the damage was already done. Even with the addition of powerful deathrattle minions in Goblins vs. Gnomes, he still doesn’t really see much play these days. 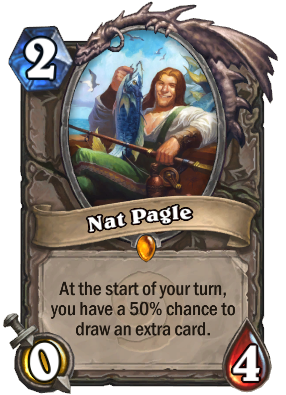 There was a time when everyone was fishing in Hearthstone. Nat Pagle’s effect used to occur at the end of your turn, meaning there was a pretty good chance you could play him on turn two and get value out of the card. If your opponent didn’t remove Nat (and it was fairly hard to remove a 4-health minion on turn 2), then he would continue to give value. With his effect being changed to the start of your turn, and the addition of several cheap early-game removals for multiple classes, Nat was rendered basically worthless, as he had to live for a full turn to even give you a chance of receiving some value. 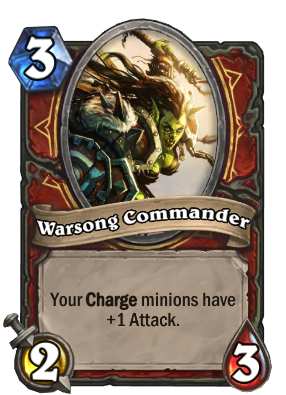 We’re now down to the nuclear bomb of Hearthstone nerfs: the card that was nerfed so hard we’re not even sure if it exists anymore. Warsong Commander used to give any minion you summoned with 3 or less attack “charge”, and in combination with Grim Patron, Emperor Taurissan and Frothing Berserker, could let players do up to 40 damage in a single turn from a completely empty board. Needless to say, Warsong Commander was incredibly overpowered. But what is even more stunning is how long it took Blizzard to realize this imbalance. Grim Patron warrior dominated both ranked play and tournaments for months before Blizzard finally deployed the nuclear option. In its current form, Warsong Commander is a joke of a card that people probably wouldn’t play even if an Unstable Portal gave it to them…

Do you think these nerfs were warranted? Do you think there are some really powerful cards in the meta now that warrant a Warsong Commander-level nerf? (I’m looking at you, Mysterious Challenger!) Be sure to leave your thoughts in the comments.