Video games will almost always have bugs, as history has proven time and time again. Yet in some cases, these glitches can be immensely entertaining, or at least prompt laughter where players never expected to find it. Here are eight video game glitches which stand out in hilarious ways, and will probably have some of you on the floor laughing.

Can you think of any perfectly funny game glitches we missed? Share them in the comments!

The climax to Heavy Rain was supposed to be a powerful sequence where Ethan finds his son Shaun and confronts a serial killer. But some players discovered a much better ending – one where the prompt to yell Shaun’s name never disappears for long. You can shout “Shaun” during the villain’s speech, during the final battle, and even while Ethan is off-screen nursing a nasty wound. It’s far from what David Cage intended, but to me, this is the only canonical ending worth remembering.

A Gift of Watermelons – The Elder Scrolls IV: Oblivion

Oblivion had many glitches great and small, including one which let players duplicate objects from the inventory. But instead of using this ability to keep potions handy for boss battles, one player decided to deliver a “gift” of 5000 watermelons to the King. And then start a fireball fight with the guards. The rendered scene played havoc with Oblivion‘s framerate, but it’s hard to deny this was absolutely worth the effort.

Sports games are notoriously buggy, despite the fact that many are visual upgrades of the previous year’s gameplay. Perhaps the most charming of these, however are the tiny football players of Madden NFL 15. Just giving it 110% with a ball that’s double their size. Godspeed, tiny player. Godspeed.

He Said To Hang On – Resident Evil 4

Resident Evil 4 was already a big step away from the survival horror mechanics the series had become known for. But that was never meant to extend to Leon spontaneously developing super powers. Or leaving Ashley behind at the climax of the game. At least he gave her the jet ski.

Watch Dogs Aiden Pearce was an accomplished hacker, but at times, he seemed to possess Wolverine-like regenerative capabilities. At least that’s the impression one gets watching his head literally get stuck against the tire of a moving car, popping loose moments before being smashed by another vehicle. Maybe there’s an app for that.

Moving Chair Railroad – The Lord of the Rings Online

The Lord of the Rings is a story of fantasy characters who defeat a great evil by walking across all of Middle-earth. So it’s certainly out-of-character that The Lord of the Rings Online had a glitch where you could magically travel across the land without leaving your chair. Regardless, it’s hilarious to watch, especially since the game’s follow action lets you link characters together into a railroad of heroic moving chairs, leaving you wondering if mimics are in Tolkien’s fictional universe.

Roman Doesn’t Like You Either – Grand Theft Auto IV

Grand Theft Auto IV will always be remembered for Roman, the annoying cousin calling you away from violent crimes to go bowling or help with errands. Players hated Roman – and apparently the feeling was mutual, as one player discovered when Roman punched his way through Nico’s seat once you completed a mission. Apparently complaining about him under our breaths was more audible than we expected. 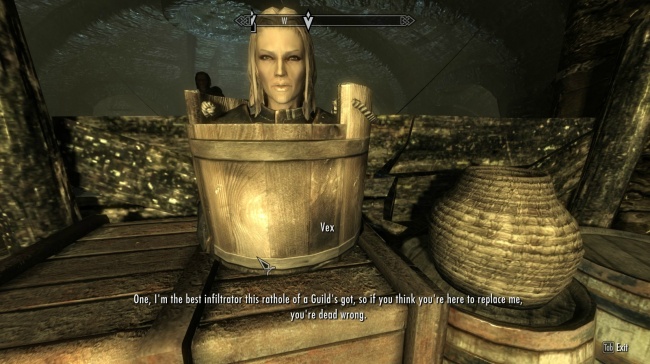 Vex in a Bucket – Skyrim

Fans hunting for strange, game-breaking moments in The Elder Scrolls V: Skyrim quickly discovered the silly ability to put buckets on the heads of hapless NPCs. But at least one player made the exact reverse occur, trapping Vex in a bucket while her head remained above the edge. What’s more, you can still carry on conversations with her, making it one of the strangest sights from an already ridiculously glitchy game.