Video games these days are complex affairs, and many of them hide some interesting secrets away for players to discover. These may be easy to find, or extremely complicated to access, but it’s not unusual to find secrets that reference other games or pop culture events, or those that just give you more insight into the game you’re playing. Here are eight hidden secrets you may have missed in recent games. 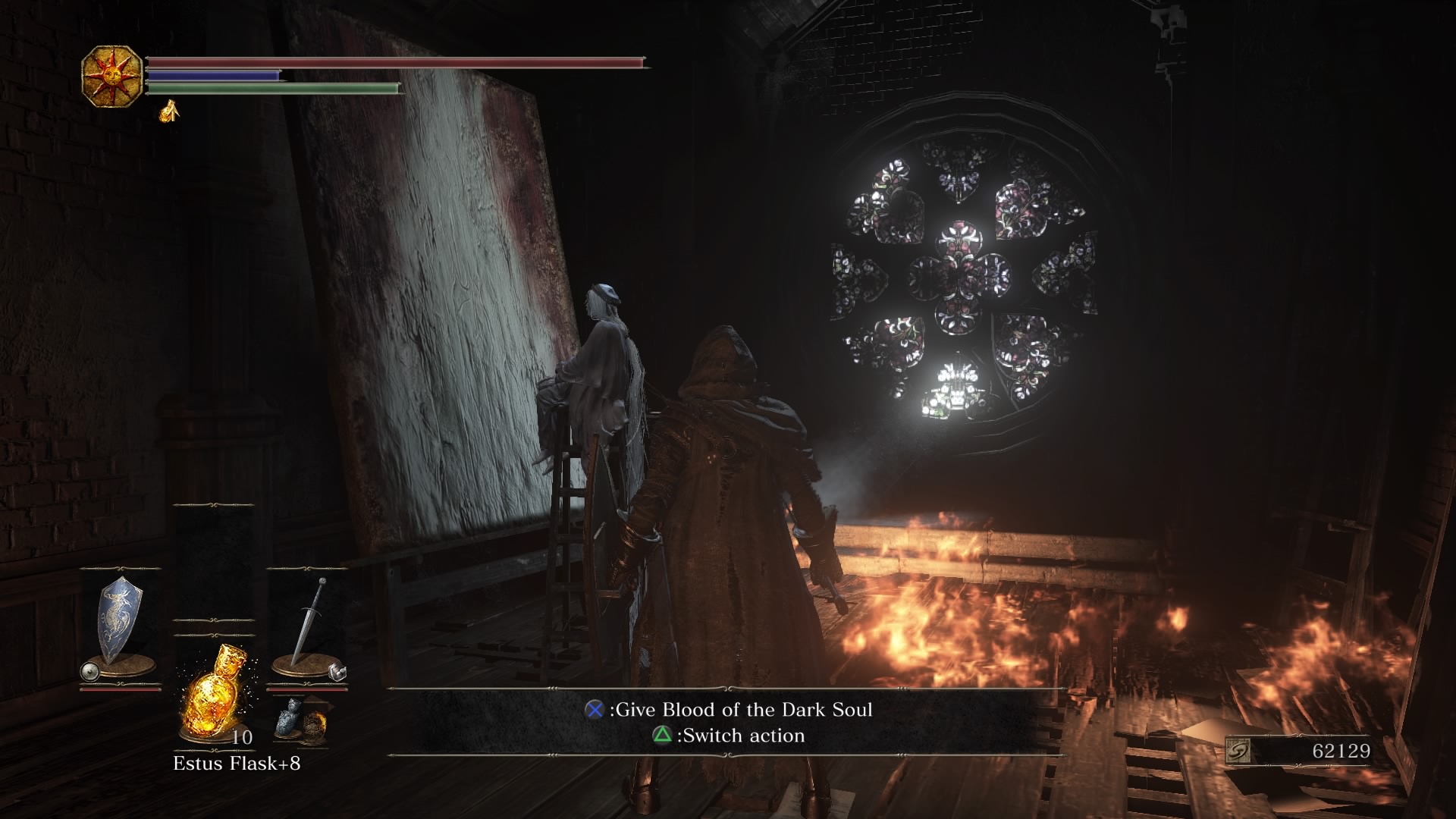 Dark Souls 3: The Ringed City – Almost Like An Ending

Let’s start this list with a secret “ending” of sorts hidden away in Dark Souls 3. Fans of the lore have surely poured over this easy-to-miss exchange, available exclusively to players that have completed both Dark Souls 3 DLC chapters.

At the conclusion to The Ringed City, the Ashen One (the player) finds themselves possessing of very strange relic. The “Blood of the Dark Soul” sounds pretty important – I mean, look, “Dark Soul” is right there in the name! So it must be pretty important, right? It isn’t exactly clear what this weird doodad is for, but there’s one character that’ll take it off your undead hands.

Up in the attic of the Chapel of Ariandel, a location unlocked in the Ashes of Ariandel DLC for Dark Souls 3, the player can encounter a curious painter that first appears in the Corvian Settlement. The young girl will take the Blood of the Dark Soul. She’s planning to paint a new world, one that is “cold, dark, and very gentle” – sounds like a nice rest after all the horrors we’ve all experienced in the Souls series.

Little Nightmares – Through The Looking Glass

Little Nightmares features its own super duper creepy secret, hidden away in a room you’re likely to miss on your first playthrough.

Early in Chapter 2, after escaping a prison filled with killer-eye security systems that turn wayward children to stone, Six reaches a staircase that leads to seemingly pointless office room. It’s a dead-end, and the path to progress is located at the top of the stairs outside. But, with enough investigation, Six can discover a special floor tile that opens a hidden door in the cupboard.

The hidden room isn’t the creepy part. After going inside, it’s all about pressing that big mysterious button. One press, and the inner-eyelid motif on the back wall opens up, revealing that you’re actually looking at a secret monitor, designed to watch the children in the orphanage sleep. Why is this in a secret room? Who uses it? I won’t speculate too much. Let’s just let the spooky implications sink in.

The twisted cult that populates Outlast 2 are desperately infatuated with the devil. Little did they know, the game itself features one Satanic nod that’s incredibly tough to catch on your first playthrough. The developers show their love for pop-culture satanism scares with this audio secret.

Let’s backup and talk about a different aspect of the game – the creepy school, and your trusty camera. The ubiquitous camera isn’t just for night-vision, it can also record especially creepy collectibles as you progress through the Arizona badlands. Periodically, our hero is transported to a spectral school that (probably) isn’t in our reality. Is it a dream? A memory? Who knows! But we do know that you can still record disturbing scenes on your camcorder.

The problem? These entries are distorted, the audio is completely garbled, and the visuals are nonexistent. It all seems meaningless, until a few enterprising fans reversed the audio – it turns out there are secret messages in the schoolhouse recordings, and they’re all related to the suspicious events at the school. Just don’t expect any concrete answers. If anything, this is yet another mind-blowing detail that adds mysterious layers to the already weird, psycho-Christian story-telling in Outlast 2.

This indie adventure offers a 2D take on both the Metroidvania genre, and the Souls-like genre, probably making it the most indie game ever. That doesn’t mean it should be ignored – just the opposite. Hollow Knight stands tall, even if you’re playing a protagonist that’s not much bigger than an ant.

This is another game that’s jam-packed with weird secrets, optional rooms, and cryptic NPCs. But, no NPC is quite as cryptic as Mr. Mushroom. Fans have poured hours into unlocking all the secrets of the map, and finding every instance of Mr. Mushroom unlocks a bonus ending, leading up to a “To Be Continued” card that previously didn’t exist.

Basically, talking to this Mr. Mushroom characters reveals a secret sequel tease that only the most dedicated fans will ever find.

Nier: Automata throws mind-blowing revelations in innocent players’ faces at a distressing rate. There’s no way to completely avoid spoilers while we’re talking about Nier, so we’re sticking with something relatively minor, and still totally secret – a connection to the original Nier.

Okay, so let’s talk about the kid with the creepy-face. That’s Emil, one of the main characters in the original Nier, and one of the few able to live long enough to witness the events of Automata. A long, long time ago, this kid swapped bodies with a locked-up killing machine, hence the bizarre appearance and the mismatched kid’s voice.

After encountering Emil, the player can start a side-quest to bring Emil special flowers called Lunar Tears. These unique glowing specimens help Emil recover his memory, bit-by-bit, until Emil allows you into a very special spot he’s preserved for a very long time. Fans of the original Nier will recognize Kaine’s shack in the underground haven. It’s a nice nostalgic nod to the previous adventure for fans like me that still can’t believe there’s a sequel to Nier.

Resident Evil 7: Biohazard – What The Heck Is The Toy Axe For?

No list of recent, successful games should skip Resident Evil 7. Filled to the brim with gonzo psycho-southern energy, there’s no end to the secret item locations, or nooks and crannies in the Baker residence. But – if you’re as foolish as I was – there’s one item that instantly perplexed and left more than a few fans scratching their heads. We’re talking about the Toy Axe, the wooden weapon found in the attic above the 2F Kid’s Room.

The Toy Axe (located alongside the more conventionally useful Model Shotgun) isn’t so hard to figure out all on your own, but it is my most personally vexing secret, so I had to include it.

No more suspense – the Toy Axe can be used to solve a shadow puzzle in the yard area of the Baker Estate. In the corner, off the porch, there’s a thicket with just enough space to slip through the foliage and find a completely optional projector. Using the Toy Axe, players can form a crude “7” shape to complete the challenge and earn a bonus upgrade injector.

This is another cheat – the secret itself isn’t in Batman: VR, the Rocksteady developed tech-demo designed for the PSVR experience, but was actually retroactively discovered in Batman: Arkham Knight.

The first two Batman: Arkham titles featured super-secret locations that hinted at future Rocksteady games. Arkham Asylum‘s Warden’s Office had an unmarked wall that could be bombed to reveal blueprints for Arkham City. The trend continued in Arkham City, this time with an unmarked hatch on a boat, housing swarms of bugs that hinted at Scarecrow’s plan for Gotham in Arkham Knight.

Under all our noses, Arkham Knight included a secret hint for Batman: Arkham VR – but only in the DLC. One add-on episode included a map set in Wayne Manor. Playing the piano caused a hidden panel to open, revealing blueprints for the future VR-centric title.

The piano wall was found relatively quickly, but it wasn’t until the release of Batman: Arkham VR that the truth sunk in – it wasn’t a hint for a future Bat-game, just a Bat-VR-experience. Holy disappointment, Batman.

Final Fantasy 15‘s development cycle is legendary, and the game is littered with the remnants of discarded ideas. One such element that most players will completely miss is a full arsenal of ranged weaponry. Yeah, guns – and not just any guns. Assault Rifles, pistols, and sniper rifles (with functional scopes) can all be collected and used in combat.

This isn’t just a bigger, badder sword with stats – these hidden guns are only available in seemingly random spots all over the map, as if some lonely developer, wanting to see his years of fruitless work enjoyed, snuck the arsenal in.

It leaves us asking so many questions. Why are the guns so secret? Were guns originally a meaningful part of the game? What would an open-world Final Fantasy shooter even look like?

I’ll leave those answers to smarter people than me. What are some of your favorite secrets from recent releases? Sound off in the comments, and let me know about all the amazing (and amazingly weird) stuff I’ve missed out on this year.