The Halo franchise is, unquestionably, one of the most successful in modern gaming. In 2001, Combat Evolved set the standard for modern console shooters. Halo 2 introduced millions of players to the potential of online play through Xbox Live. Halo 3 still hadone million players logging onto Xbox Live every day two years after its release.

Considered by many fans to be the “primary” story arc, Halo 1, 2, and 3 follow Spartan Master Chief John 117 and his AI counterpart Cortana. Called by Frank O’Connor (former Community Manager of Bungie and current Franchise Development Director at 343 Industries) an “epic space opera,” the Master Chief saga focuses on the end of the Human-Covenant War in the year 2552. During this period, Master Chief discovers a massive ring-shaped structure in the far reaches in space (Halo), battles the Flood and the Covenant for control of the ring, returns to Earth, stops a Covenant invasion, finds a new Halo, battles the Flood and Covenant again, loses Cortana, returns to Earth, battles more Covenant invaders, portals to the edge of the galaxy and a new Halo structure, reunites with Cortana, defeats the Covenant/Flood, and ends up drifting through space towards a mysterious alien planet.

Anyone that has played the Halo trilogy campaign knows this story.

Halo: ODST, Halo Wars, and the more recent Halo: Reach have helped to take the franchise in new directions and shed more light on the history of the Human-Covenant War. However, to an uninformed but interested player, they create more questions than answers. What was first contact with the Covenant like? Exactly who were the Forerunners? Who is Dr. Halsey? Why are these Spartans smaller than the Master Chief? Where is the Master Chief during this time? Epic space opera games can only tell so much of the story. Other mediums are necessary to fully bring the consumer into the narrative universe.

In addition to the six videogames, Halo‘s stewards have released six (with two more announced) novels, five comic book series, a graphic novel, two art books, an encyclopedia, numerous live action shorts, and an anime compilation. All of these media take the consumer deep into the Halo universe and tell stories that the games could never hope to tell by themselves.

In some respects, the novels, not the games, are the real vanguard of Halo lore. Starting in 2001 with the release of The Fall of Reach, these books offer a detailed account of the various events that take place before, during, and after the games’ story. Some explain the history of Master Chief and the Spartan II program. Others tell the story of the Human-Covenant war from a civilian perspective or from that of members of the Covenant itself. Penned by some of science fiction’s most promising current authors, these novels create a grounded narrative framework on which the greater story of Halo‘s extended universe is founded.

Adding to this foundation are the comic and anime series. Like the books, each comic series follows a specific cast of characters through their roles in the Human-Covenant War, from a group of ODSTs on a rescue mission to a UNSC colonel seeking redemption on the eve of the Covenant invasion of Earth. As a companion to the established canon, the Halo Encyclopedia presents a “factual” explanation of every important aspect of the Halo universe, from faster-than-light travel technology to the caste system of the Covenant. 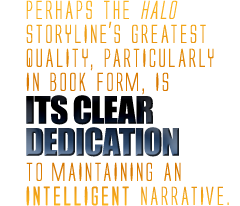 Perhaps the Halo storyline’s greatest quality, particularly in book form, is its clear dedication to maintaining an intelligent narrative. Known to some as futurism, many of the social, political and technological claims within the narrative are based on, or explained by, extrapolation of current trends. Even if a fan isn’t particularly interested in the relationship between a super-soldier and his AI, he may still enjoy reading about the intra-human political conflict that takes place before the Human-Covenant war. Beyond this, the attention to detail in every facet of the narrative has spawned a number of fan communities whose focuses are as varied as the narrative itself.

At Bungie.net, the official website for the studio that created and developed five out of the six Halo games, there is a sprawling forum of users who spend much of their time trying to fill in the yet-unexplained canon. These are not simple messages of “I bet Master Chief will …” but well thought-out and accurately researched theories, some to rival a History major’s final project. From discussing Halo as a Christian allegory to exploring the real definition of “Forerunner”, there have been a wide range of theories made over the years, many of which have been proven accurate with the release of new books and games.

The Halo series has a history of incorporating Alternate Reality Games (ARGs) into PR campaigns. ARGs in general are defined as “a cross-media genre of interactive fiction using multiple delivery and communications media.” They typically involve a central narrative which participants discover through interaction with the “characters.” The first and most widely known Halo ARG was titled “I Love Bees.” Begun just before Halo 2‘s release, the ARG revolved around an actual website, ilovebees.com, where anyone could log-on and take part in the story. Participants were tasked with solving cryptic puzzles, even answering phone calls at real-world phone booths all over the world. Successful completion would yield audio files on the website that slowly added to the growing story narrative. As the ARG progressed, a tale unraveled, telling of wayward AIs and the impending Covenant invasion of Earth. During this time, over 600,000 fans rallied together on various fan websites, sharing theories and ideas. As subsequent Halo titles were released, other ARGs preceded them. Each received a strong and enthusiastic response from the community – a community that still exists today.

Since Bungie’s departure from the Microsoft family in 2007, intellectual property rights for the Halo IP have remained with 343 Industries, a wholly owned subsidiary of the Microsoft Corporation. In 2009, 343 Industries launched Halo Waypoint, a centralized online platform for news, multimedia and game content related to the Halo series. Updated on a near-daily basis, Waypoint gives fans of the series consistent insight into the Halo universe. Every weekly offering contains motion comics, biographies, or fact sheets on various people, places, and objects from Halo. On the 343 forums, community managers facilitate events specifically centered around discovering Halo canon. One ongoing thread, dubbed the “Halo Book Club,” invites players to read a selected work from the Halo literary library and join in discussion about it online. This not only provides a structured environment in which fans can explore the narrative universe but also gives them a large network of opinions and perspectives on which to draw and form their own. As Microsoft moves forward with future titles and Bungie moves on with new IP, Waypoint will become the epicenter of Halo fandom. 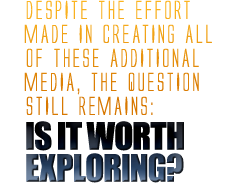 Despite the effort made in creating all of these additional media, the question still remains: Is it worth exploring? The short answer is: Yes.

Each Halo game tells a specific story and, for the most part, does it quite well. Every installment takes us back to that universe and lets us explore a new facet and narrative. Yet, their ability to tell a story will always be limited to the confines of gameplay. Peripheral media shows us new people, places, and ideas that we, as gamers, did not know existed. It enriches our gaming experience by taking us beyond the games and expanding our understanding of them.

Players who have completed the core trilogy know Master Chief as a stoic and unwavering soldier but little else about his personality or history is revealed. Players who have also read The Fall of Reach see Master Chief in an entirely different light. They have borne witness to his training in the Spartan II program, the evolution of his relationship with Cortana and his role over the entire course of the Human-Covenant War.

This is the essence of peripheral media.

There are undoubtedly many of you who, until now, have not given much thought to the story beyond your games. To you, I say this: Explore! Take the time to investigate the games you love beyond the games themselves. Read a novel, find a fan website, start a discussion. You may not be a fan of Halo but, chances are, there is a greater story to be told, whatever your favorite game or genre is. Delve deeper. Developers and publishers have invested considerable time and effort into expanding their narrative universes. Taking the time to explore them will only better your gaming experience.

Ryan Ward is an aspiring writer/producer and staff writer for NightmareMode.net. He commutes between northern Maine and Boston and has a penchant for beer brewing, pontificating, and Celtic trad rock.