Richard Morgan is a veteran novelist whose works span the gamut of speculative fiction with award-winning sci-fi and fantasy literature in his repertoire. His novel, Altered Carbon, is a staple of modern cyberpunk sci-fi literature. Netflix recently announced it was turning the novel into a 10-episode series with some big names attached to its production. 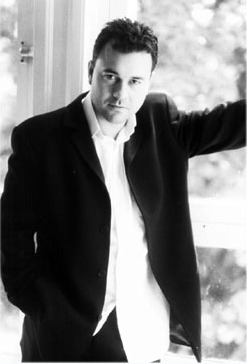 Not one to rest on his laurels, Morgan set to work on a dark fantasy trilogy, A Land Fit for Heroes, which he recently turned into an interactive game book with the development talents of Liber Primus Games. Set in the same time and place as the trilogy, A Land Fit for Heroes tells the story of three unlikely heroes whose lives intersect with the events of the book. Situations play out based on the player’s decisions, but fit into a broader, established chronology.

I recently caught up with Morgan to talk about his latest game and what his views were on the game industry. No stranger to video games, Morgan wrote a few of them–two you might have heard of: Crysis 2 and Syndicate. I asked him how he found his sea legs.

“In fact, it happened in the nicest possible way – I was invited in,” he began. “Some guys at Electronic Arts were fans of the Kovacs books, and in 2008 they approached me to see if I’d like to come aboard and develop story and characters for one of their games. I’d been a crazy enthusiastic console gamer since 2002/3 (around the time I quit my day-job and went full time as a writer), so it was pretty much a dream come true when the offer materialised and I jumped right in. One thing led to another and in a very short space of time that initial job turned into two lead writer gigs and some smaller consulting jobs on a variety of other games.”

It’s been a few years since those games were released, and some things have changed since then.

“Well, it was – and still is – a very young industry, and it bears all the hallmarks of that, both positive and negative,” said Morgan. “It can feel a bit like the Wild West coming in – there’s a youthful energy and enthusiasm to it all which is really bracing (especially if you’re a hoary old novelist in your early forties!), a real Blue Sky sense of potential.”

Morgan shared an anecdote about how game developers were constantly overcoming technological limitations through innovation and progress.

“I still remember talking to one of the tech team on Crysis 2 and asking them if the game engine could do something I needed for a particular narrative twist,” he said. “This guys thinks about it, strokes his chin a bit, and then says ‘Well, not yet… but why don’t you go ahead anyway.’ That was a real eye-opener for me – the idea that the tech was moving so fast that what was impossible right then would be eminently doable in a couple of months’ time.”

Morgan also talked about how the templates for making games are still soft–malleable, even. “They’re not formalised industry-wide the way they are in, for example, in movie-making,” he explained. “The prevailing attitude within any given project tends to be ‘Ok – let’s give it a shot and see.’ You live consistently at the edge of things, at the brink of possibility, and that’s truly exhilarating.”

“Of course, the downside of that dynamic is that it’s also a very unstable environment – the tech changes, the market shifts, commitments and appointments at senior corporate level cycle round, the consumer base vibe switches,” he continued. “Hype flares up or gutters out. Genius diva developer types – by their very nature pretty unstable people – bail out or move on or occasionally just melt down. Studios overreach and go bust, get bought up, simply disintegrate. Hot brands lose favour or get killed by faulty tinkering, Something Huge and New is always just around the bend and everyone’s desperately looking to identify it and tear off a piece.”

“At times, it can be a bit like living and working inside the mind of a ten year old boy,” says Morgan. “And that instability trickles down, seeps into everything – game makers are habitually young and restless and the nature of dev cycles tends to make them globally nomadic. Even the more rooted senior industry staff can find themselves living lives like George Clooney in Up In The Air. Today you’re working in Frankfurt but yesterday you were in Montreal and tomorrow you’ll be in Sydney – that kind of thing. Again, it’s very exciting, but you’ve got to wonder how much productivity gets lost in the mix. It can sometimes seem as if there’s a huge amount of heat and light, a lot of motion and noise, but not a lot of solid work getting done.”

Morgan said that most of his recent involvement in video games have been fairly low-key projects and that it’s been awhile since he found himself at the heart of anything big, so things might be different these days. “But you know what – I really, really doubt that,” he quipped.

It was the perfect opportunity to segue into the development of A Land Fit for Heroes, his newest game.

“Well, we decided early on that it would be a mistake to use the extant storyline – the books are pretty character-driven and there’s a lot of introspection, plus the narrative outcomes are pretty, ehm, ambiguous, shall we say,” he said. “Now that’s clearly not ideal for what is fundamentally a dynamic decision-based gaming experience. So we crafted a fresh set of characters and built a narrative that runs alongside the events of the original trilogy, occasionally intertwines with them – you do, at a couple of junctures, run into the protagonists from the novels – and has some significant impact on the outcomes you saw there. But at the same time, this is very much a separate story, and you don’t need to have read the books to ‘get’ the gamebook.”

Intrigued, I asked him what the process of translating the books’ chronology into the game was like, because he clearly had to do more than just copy the words.

“It was a lot of fun, and not least because other people were doing the bulk of the heavy lifting!” He said. “I’d already agreed with the team at Liber Primus Games that they could handle most of the writing. I’d had a look at the branching maps you need to put together a gamebook narrative and just reading them made my head spin. These guys, on the other hand, work with code on a daily basis so they were completely at home in that environment. And they were huge fans of the novels, they really wanted to get the feel of the world right.”

Morgan explained: “So what we settled on was a process whereby I’d act more or less as a showrunner, helping create characters and narrative arcs and keeping continuity with the fiction of the original trilogy, and then guesting as writer on a couple of occasions where my original characters showed up in the story. What that involved in practice was sitting down with the team and having these long spitballing sessions until we’d hammered out something we could all agree on, and then the Liber Primus Games guys went off and brought it to life. And then I went in during the final stages for a few finishing touches.”

The driving force behind it all was the question: What would it be like to make your living from chopping up your fellow human beings with sharpened steel?

Morgan says that one of the most pivotal elements to carry over from the books to the game was the tone.

“The whole idea of the original Land Fit for Heroes trilogy was to deconstruct the standard heroic fantasy tropes, hold them up to the light and see what horrors might be hidden there – the driving force behind it all was the question What would it be like to make your living from chopping up your fellow human beings with sharpened steel? And the base assumption is that it would fuck you up,” said Morgan.

“The so-called heroes of the piece are all seriously damaged by their employment, and the world as a whole is a screaming bleeding mess as a result of the base assumptions it runs on. There’s no attempt to paint the action in terms of heroes and villains or good and evil, no sense that there is a right or wrong side to be on – it’s just hardened, damaged men and women trying to survive and making their own desperate best-guess decisions about how to do it. That was the tone I wanted carried over – and Liber Primus Games really delivered on it!”

Given that the books are strongly character-oriented, with heroes described in shades of grey rather than good or evil, I asked how much agency the main characters in the game would have.

“Well, obviously this is a constrained narrative – we’re telling a story here, so it couldn’t really be otherwise. That’s the book side of gamebook!” Morgan replied. “There is a defined ending, and as a player – if you manage to survive – you will reach that endpoint. But as to what shape you’re in when you arrive there, what you’ve been through, that will depend very much on the choices you make.”

“What the gamebook will do is allow you to inhabit a character’s skin in a way you can’t with ordinary prose fiction: you get to govern their reactions to circumstance with your own, you get to put your own stamp on how they proceed through the story, you get to take chances and make choices. And, of course, you have to deal with the consequences of those choices, good and bad,” he said.