2009 marks two important anniversaries for me: the 40th anniversary of my birth and the 30th of my introduction into the hobby of tabletop roleplaying games. Of the two, the latter is far more interesting to anyone reading this column, not least of all because of the strange turn of events that set me on the path to a lifetime of gaming.

August 1979 saw the release of Gary Gygax’s Dungeon Masters Guide, the third and final volume of his magnum opus, Advanced Dungeons & Dragons. D&D, in its various forms, had by then become a craze at high schools and on college campuses across the United States, making it the subject of numerous magazine and newspaper articles interested in this “strange new fantasy game.”

August 1979 also saw the disappearance of a Michigan State University student by the name of James Dallas Egbert III. Egbert was a 16 year-old child prodigy with a history of clinical depression and drug abuse; he was also a player of Dungeons & Dragons. When the young man went missing, his family hired a private investigator, William C. Dear, to determine what happened to him. At first, Dear believed that Egbert had gone into the steam tunnels beneath the MSU campus while playing a “live action” version of D&D and become lost. Although Dear’s initial hypothesis proved incorrect — Egbert had never played D&D while at college, and although he had entered the steam tunnels in a failed attempt to commit suicide, the press widely reported the former story as if it were true. Suddenly, everyone was talking about Dungeons & Dragons, often without any real understanding of what the game was about or how it was played.

Among those who took an interest in D&D was my father, who’d read these news reports and found the whole thing baffling. Seeing his interest in the game, my mother then decided to acquire a copy of Dungeons & Dragons — the new Basic Set edited by Dr. J. Eric Holmes — which she bought out of the Sears Catalog. When she presented it to my father, he couldn’t understand why my mother had purchased it. He was interested in reading news stories about the game, but he had no interest in the game itself. And so that Basic Set rested in a hallway linen closet, unopened, as summer turned into fall and the weather grew colder in suburban Baltimore.

Every Christmas vacation, it was the tradition of my friends and I to go from house to house, checking out each other’s presents and declaring who had gotten the best gifts that year. My friend, Mike, had received a board game called Dungeon!, in which the players portrayed heroes, elves, and wizards as they explored a labyrinthine series of rooms, inside of which there were numerous monsters guarding valuable treasures and magic. The game enthralled us and we played it for hours on end. Everything about the game, particularly its odd assortment of monsters with funny names like “black pudding” – isn’t that a sausage of some kind? – held our attention and we all declared Mike the “winner” of that year’s Christmas gift competition.

When I went home, I remembered that box in the linen closet and asked my mother if I could open up the game and see what was inside. I assumed, based on the similarity of their names and the fact that both games were made by TSR Hobbies, that Dungeons & Dragons would be fairly similar to Dungeon! How wrong I was! Opening the box, I found two books — a rulebook and an “adventure module” entitled In Search of the Unknown — a catalog of other TSR offerings, and a coupon for polyhedral dice. So great was the demand for those funky Platonic solids that TSR’s supplier couldn’t keep up and so many boxes of the Basic Set included laminated chits in place of dice as a stop-gap measure, along with that coupon. 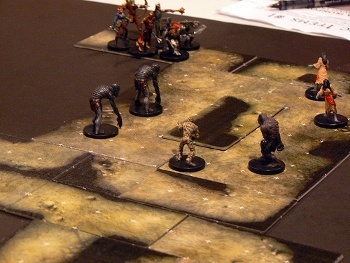 As strange as that was, even more strange was that D&D contained no board. The rulebook was much thicker than that of Dungeon! — 48 pages — and, while I recognized a few things in its pages from the board game I’d played at Mike’s house, there was much that made no sense to me. The idea of creating a character to play a game was an alien concept to me at age 10, as was the notion of a player — the Dungeon Master — who “ran” the game for the other players, rather than participating in the same way that they did.

Confused, I took the Basic Set over to Mike’s house the next time we got together and my friends and I attempted to figure out how to play this crazy game. We used Dungeon! as a model, and took out large pieces of construction paper and cardboard on which we drew our dungeon maps, cannibalizing markers and playing pieces from other games like Monopoly and Clue to represent characters, monsters, and treasure. The end result was a peculiar hybrid entertainment, neither pure board game nor quite like roleplaying games as we eventually came to know them, but we had fun and kept refining our supposed understanding of the rules of Dungeons & Dragons.

At some point, Mike’s teenaged older brother, who’d normally never taken any interest in us, came over to see what we were doing. When we explained that we were “playing Dungeons & Dragons,” he just laughed at us, which was nothing new, as he frequently made fun of us. Not long afterwards, though, he decided to “set us straight” and teach us how the game was “really played.” When you’re a 10 year-old geek and your friend’s metal-head, high school-age brother decides to initiate you into one of his pastimes, it’s hard not to feel as that, if only fleetingly, you’d reached a new stage of your life – and so we had. No longer were we just a bunch of kids; now we could be John Carter or Conan or Fafhrd and the Gray Mouser, pitting our swords against evil sorcerers – all because of a game that didn’t even have a board.

My friends and I soon learned how to play D&D “the right way” and we played it as often as we could. The following summer we sometimes went over to Mike’s house in the evenings, after dinner, to play in adventures run by Mike’s brother and his father, who acted as co-Dungeon Masters. Mike’s dad was an old school wargamer — a true grognard — and being able to sit around a table with him at the head, rolling dice behind a screen, and determining the fates of our foolhardy characters was the ultimate definition of “cool” for us in those days. Mike’s dad and brother were merciless as DMs, but they were also relentlessly fair — key traits I associate with a good game referee to this day.

As with most gamers in those days, we were voracious; we played every game that we could get our hands on: Traveller, Gamma World, Top Secret, and on and on. Over the years I’ve tried many more and continue to do so, but, looking back on it three decades later, I doubt I’d still be playing any of them today if my initiation into this hobby hadn’t been such a magical one in the fall and winter of 1979. And I owe it all to my mother mistakenly thinking my dad would be interested in D&D.