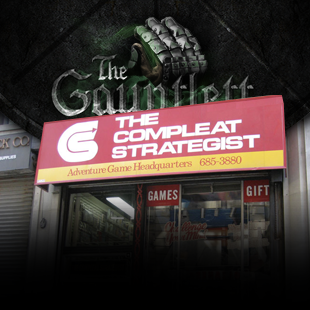 I never had a game store nearby when I grew up. Going to one meant getting on a plane, and when I got the chance I always made sure I had enough suitcase space to carry everything back with me. It was the same with conventions; I didn’t often get the chance to go, so when I did, I went on a shopping spree.

Some of my fondest gaming memories are of those stores. Sometimes finding them would be a huge pain – is it closer to this or that subway stop, what landmarks are nearby? – which, oddly enough, made getting there all the more rewarding. Then I’d search through the racks, looking for that one book or game that I needed to complete my collection. Sometimes I’d be lucky, sometimes not, but there was always something there to pique my interest, maybe even a game I’d never heard of before that moment.

One of the places I’ve spent a lot of time in is The Compleat Strategist, in New York City. The New York location is the flagship store, and there are satellite stores in three other locations on the East Coast. Mike Kilbert, one of the owners, was kind enough to take a few moments out of his busy day to talk to me about the store, and the joys of retail in New York.

Adam Gauntlett: If you were trying to describe to someone who’s never been to the store how to get there, what would you say?

Mike Kilbert: I’d tell them to head for the Empire State building, and we’re half a block away. I think that’s a pretty big landmark!

Gauntlett: I know the Compleat Strategist has been open for 25 years …

Kilbert: Since the beginning. So you can tell I’m just about 25 years old!

Gauntlett: I wasn’t even going to go that far! Youthful and vigorous would have been the way I’d have put it.

Kilbert: Basically, we’re from New York, we live in New York. We never dreamed of having a chain; we thought it would only be one store, and the perfect place for it would be New York. My father and a friend of his, George Blagowidow opened the store, with the idea that it was a possibility for something like this. Actually it goes a little back, because George was a publisher and producer of military books. He would go around the United States selling his books to small stores, and he noticed that the bookstores were doing quite well. He was approached by Avalon Hill and SPI, who suggested that, as long as he was selling military books, he might as well sell military games. It seemed like a natural tie-in. He said OK, and for a while he sold directly to the bookstores. He noticed that the bookstores’ sales were going up and up, so he approached my father and said, why not just open up a store that sells these games? And that’s what he did!

Gauntlett: What’s a typical day in the life of the Compleat Strategist?

Kilbert: We get to the store, the first thing that happens is we get our shipment for the day. We get shipments every day, usually new product, new games we haven’t seen before. We start to price it, put it on the shelves, and at the same time we have customers coming in. Some are locals from New York City and the surrounding area, but a lot of them are people from all over the world!

Kilbert: Very little of it is mail order, we’re not competitive because we can’t cut to the bone like websites do. They don’t have overhead, so they can afford to make $5 on a $50 game, and we can’t do that. We rely on walk-ins.

Gauntlett: I know you’re one of the few specialist game stores in New York City, if not the only one these days. Why do you think that is?

Kilbert: It’s not a profitable business, and it’s not a big business. If it was any bigger, someone would open up a huge store and knock us out. But there’s no opportunity, so nobody’s stepped in!

Gauntlett: Does the Compleat Strategist often have a presence at conventions?

Kilbert: Yes! We go to two conventions a year, PAX East in Boston, and we do Comicon in New York. We’ve tried cons way back when, but we stopped; it can be very tedious for us. But when PAX opened up a presence in Boston we felt it would help our Boston store to attend and raise our profile. We started going two years ago, and we’re very happy with PAX. The same guys who run that have been trying to get us to do Comicon for years, and finally three years ago we gave in!

Gauntlett: Were you born into retail?

Kilbert: Myself? No. I’m a retired New York City schoolteacher; retired fifteen years ago. Before that I would go to the store on weekends or whenever I had a day off and work in the store. My brother works there full time.

Gauntlett: That must be a pretty punishing schedule.

Kilbert: Took a toll on my life, I guess!

Gauntlett: Do you play games yourself?

Kilbert: I could, but my life has always been so complicated I just never seem to have the time. I enjoy Napoleonics and American Civil War board gaming, and I enjoyed figure painting when I had the time. Right now I just don’t have the time for any of that!

Gauntlett: I know that each jurisdiction has its quirks; what’s the one thing about working retail in New York specifically that surprises you?

Kilbert: We never know where people are going to come from. We get people from all over the world who show up out of nowhere and we’re amazed by the pull of our store. That someone can show up from Bosnia and say, “I’ve been looking for the Compleat Strategist forever! I’ve always wanted to come here!” We have a huge number of people from Brazil, people from Australia, from New Zealand, and I can’t imagine that people from so far away should come to New York and make us their first stop. But they do! They’re always willing to recount their stories, to tell us, “I just had to come here, I couldn’t be anywhere else, and I have this empty suitcase that I intend to fill up here at the store.”

Gauntlett: What do you think is the biggest challenge facing the brick and mortar store at the moment? Is it the internet, something else?

Kilbert: The internet, number one, definitely. We can’t compete on price, not with our overheads. That’s the first, but the second is related to that. It’s very discouraging when you’re talking to a customer on the shop floor and you’ve convinced him you’ve got the right product for him, but he checks his phone and says, “I can get this $15 cheaper on the internet. I’ll see you, goodbye!” That’s very discouraging!

Gauntlett: Do you host gaming in the store?

Kilbert: We do! We have a game room in our basement with ten tables, and we have ongoing gaming every Thursday night and every Saturday. It’s very busy down there! Last Saturday we had people playing X-Wing, D&D and Pathfinder, and Heroclix all at the same time. They had fun!

Gauntlett: To wind up on a fun note: I know that everyone who works in retail has at least one crazy story. What’s yours?

Kilbert: There’s so many of them, I don’t know where to start! Back in the old days we had a hobby shop that was nearby, and it sold balsa wood. We never did, we made it a rule that we didn’t want to compete with them. So we had a customer that came in who wanted balsa wood, and insisted that we always had it. We kept telling him, no, try the other place, but he insisted that we always had it before, so why didn’t we have it any longer? Finally I decided this guy is ripe for it, so I told him to go in the shop down the street and ask them for balsa wood, but to make sure when he got there that the balsa wood was very fresh. He looks at me and says, why do I want fresh balsa wood? I say to him, if it’s not fresh it won’t work right, so to make sure to get it from the back room, not to buy anything from their sales floor. Then he queries me further, and asks, how do I know if it’s fresh or not? I say, put a piece in your mouth and take a little bite out of it. If it crunches, it’s not fresh, so don’t take it.

Now, we knew the guys at the hobby shop. So he goes over there, but I forgot that I had done it. When their store closed, their guys usually came over to our place and we went out for a few drinks. This time they come over and tell me this crazy story about a guy who comes in, biting balsa wood! Then I remembered what I had done to them …

There was one time when a customer comes in, sees a beautiful painted regiment of Highland Guards, Napoleonics, that were painted, and he wanted to know how he could make the tartan pattern on his soldiers, and I say, buy tartan paint! Just paint it right on!