For all of A Machine For Pigs’ problems with not being so much of a game as its predecessor, it is at least pretty well-written. And one of the qualities I admire most in writing is elegance. Being able to convey an idea with as few words as possible is what shows true mastery of the craft. I also like writing that immediately grabs you from the very first thing you read, which is something I kept in mind when I started writing both of my books. That’s why Mogworld starts with an alarm going off. Partly for that reason, and partly so that the audiobook can kick off as obnoxiously as possible.

And as a fan of horror, especially video game horror, you have often heard me rail about the importance of subtlety in horror, and that when a big-budget project is obliged to paint all its money up on the screen, subtlety becomes impossible. Subtlety ties into the same appreciation for elegance and doing a lot with very little. Both the Amnesia games show a great understanding of how a creepy atmosphere is created through small touches. And if you want a specific example, look no further than the very first spoken sentence you hear at the very beginning of A Machine For Pigs, over a black screen:

And in five little words, aMfP is better written than quite a lot of games. Let’s analyse this sentence as closely as possible, so we can understand why I find it so effective. The elegance I mentioned is in evidence in that it is basically the bare minimum of words for the sentiment; you couldn’t remove any of these words without changing either the meaning of the sentence or the intended effect.

“Daddy” is a good start which immediately creates two characters where previously there had been none: the speaker, and the person they are speaking to, who is apparently their father. The fact that it’s also a childlike term of endearment gives us a good idea of what kind of mental level the speaker is operating on, while also giving us the sense that the relationship between father and child is an understandably informal one.

“Please” turns the sentence into a plea, obviously, rather than a command. And a character does not resort to pleas when they have any kind of power over the situation, or the person they are addressing. Two words in, we have now painted the picture that the unseen father has total control over the future of the speaker. The fact that the sentence is said at all implies that the father either is or was open to being reasoned with, or at least that the speaker believes him to be, reinforcing that the characters have a strong familiarity.

What’s also worth noting is that without this word the sentence “Daddy don’t kill me” reads like it’s being said very spontaneously, in response to some equally spontaneous action on the part of the father. The word ‘please’ – along with the slow, plaintive delivery – creates the sense that, whatever the father is doing, he is doing it not with a momentary surge of wild passion, but with a sinister deliberation and determination. The speaker can see his intended fate coming from a far enough distance that they have had time to become somewhat resigned, although not resigned enough that they won’t resort to begging at the final moments. 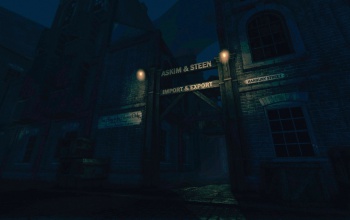 “Don’t” isn’t worth dwelling on too much, but the fact that it’s a contraction somewhat underlines the informality in the speaker’s language.

Things hot up again with “kill”, though. This is one of the words that’s doing all the legwork. So far we’ve painted a picture of childhood and parental familiarity, and all the things that those themes bring with them: innocence, love, and the obligation to provide protection and security out of that love. All of those things are immediately turned on their head by the introduction of extreme violence. It’s the kind of situation that calls for an unnecessarily long academic word: ‘juxtaposition’. The effect created by two extremely different themes displayed side-by-side. Horror uses juxtaposition almost constantly, usually the kind created by something innocent placed alongside violence. Like when Robbie the Rabbit shows up in Silent Hill games covered in bloodstains.

Thinking about it, this is another thing triple-A horror games tend to fuck up. Dead Space happens almost exclusively in harsh, metallic corridors with blood everywhere, which is exactly the kind of place one would reasonably expect something sudden and violent to take place. Sudden and violent things happening in places that seem to be quiet, abandoned or safe are what catch you off guard and get under the skin.

Finally, ‘me’ is an identification of the self, and a desperate plea to survive as an individual. It’s an attempt to make Daddy recognise the person they are about to kill as a human being to be empathised with. A last gasp from a selfish consciousness stripped of all motivation except to continue existing.

Other things surrounding the words add to the effectiveness. Without wishing to spoil the moment for anyone else (although I’ve kind of already done that – to paraphrase E. B. White, analysing a sentence is like dissecting a frog, few people are interested and the frog dies of it) the sentence is followed shortly afterwards by a horrible, cacophonous noise, and an indistinct visual that does little to reassure, so it’s probably safe to assume that the plea fell on deaf ears. And what I haven’t mentioned thus far is that the speaker of the voice, contrary to what the childlike words and inflection imply, sounds like an adult male. Which sends the existing intrigue on a right-turn down the mystery highway, and the game has thoroughly taken over our headspace to sucker us in for the long haul.

Expect this wasn’t a terribly interesting article for people who aren’t into dialogue writing, was it? Expect most of you are more interested in knowing when my GTA5 review will be out? Sooner rather than later, alright? Christ.