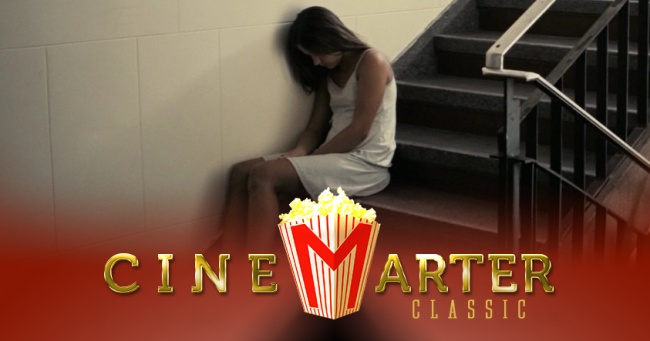 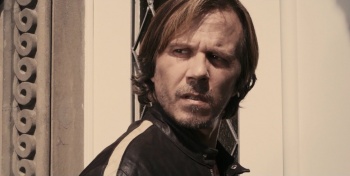 It’s disgusting. The end.
…
…
…
Okay, fine. A Serbian Film is an exploitation film that you’ll probably only watch if a buddy dares you, or if you like to test your own cinematic limits. It’s gross, it won’t make you happy to see it, and there’s theoretically a point behind it all, although I get the feeling that most people – including myself, to an extent – are going to simply take the content at face value, discard it because of that, and that’ll be that. And I think that’s okay.

There are things about this deal that Milos doesn’t like, but the money’s amazing – he can retire forever and never worry about money again – so he accepts. He’s not told what he’s going to be shooting, who it’ll be with, or anything about it. He’s told this is simply so that his reactions will be genuine, and that if he’s as good an actor as his reputation describes, then it won’t be a problem. But, then … let’s just say things get disgusting, he wants out, he can’t get out, he gets drugged, he does things he can’t remember, and then it gets even worse from there.

I won’t describe any of what happens because even reading about some of the explicit content contained within A Serbian Film is enough to cause some people to gag. Yes, it really is that bad. No, you shouldn’t search the internet for specific scenes or even a synopsis if I’ve made you curious. Either watch the whole movie so you have context, or skip it altogether. You go halfway on something like this and you’ll regret it.

A Serbian Film is vile, disgusting, exploitative, graphic, and not the type of film that most of the people who exist on this planet will want to see.

Well, if you go in fully you’ll probably regret it, too, but at least you’ll be given the complete experience, you’ll be aware of the context of the graphic scenes that take place, and you might be able to find some meaning in the events to which you’re forced to bear witness. Is A Serbian Film about something? Its director, Srdan Spasojevic, believes it is. Is it actually about the way that Serbia functions when it comes to creating films? Well, maybe. The film comments on that at one point. Is it about society? Politics? I’m not sure.

The truth of the matter is that you can read anything into any work of art if you work hard enough, and I get the feeling that A Serbian Film isn’t going to inspire that type of deep thought, simply because the content is so explicit. It’s tough to watch, it’s difficult to think about, and it’s so much more graphic than the vast majority of audience members are going to be used to that most of them are going to try to forget about it rather than think about what, if anything, it means.

And that’s okay. Exploitation is what this film goes for and as such it’s going to be treated as that by most people. It’ll be the desensitized members of the audience – the ones who see it because they hear of its reputation and see it to “prove” that they’re tough or whatever – that might be able to think more deeply about what it has to say. Most of us, and I include myself in this group, will see it, recognize its content is mostly exploitative trash, and then move on – perhaps after applying some brain bleach.

About the only genuinely good element – the one which will have almost everyone applaud, even if the rest of the film repulses them – is the acting from Srdan Todorovic and Sergej Trifunovic. As Milos, Srdan Todorovic is committed and wonderful, a truly great performance in a movie that didn’t deserve it. And Sergej Trifunovic is wickedly evil in the role as an “artist.” I keep putting quotes around that because, well, let’s just say that it’s a debatable claim.

A Serbian Film is vile, disgusting, exploitative, graphic, and not the type of film that most of the people who exist on this planet will want to see. If it interests you, start at the beginning and watch it all the way through so that you can understand the context in which we see all of its awful content. Maybe you’ll be able to think on whether or not it actually has a purpose other than to shock. Most, like me, will want to get it out of their brain as soon as possible. And that’s fine.

Recommendation: Unless you seek out this sort of thing, never watch A Serbian Film.