With the benefit of hindsight, I think I’ve figured out what made Crysis 3‘s story feel a bit detached and iffy. What it is, is that Crysis 2 ended with New York being all fucked up from the big intergalactic war that just happened in it, but with everyone somewhat hopeful for rebuilding the future. And then there’s a big gap, and then Crysis 3 opens with New York being fucked up. Only now its 24 years later and it’s fucked up in a different way. There was a point after Crysis 2 when it was un-fucked to a certain degree, but then it got fucked up again before we got back into the action. So from our point of view we’ve just gone straight from fucked up to fucked up. Which is a bit discouraging, I suppose.

It doesn’t help that we arbitrarily jumped ahead 24 years in what amounts to a quickie sequel to a game that came out almost exactly a year ago. Half-Life 2 got away with a big time jump because it was a new engine, new central gameplay, and the story had expanded massively in scope from a single facility in New Mexico to basically the entire world. And it had also been quite a few years in the real world since the release of Half-Life 1, so the big story jump was to illustrate how far things had moved. Crysis 3 has pretty much the same gameplay as before, so going straight to the big story jump felt like blowing a load to create the illusion of being a bigger and more epic game than it actually was. It didn’t feel earned, is where I think I’m waffling to.

It also didn’t hurt that Gordon Freeman had been in suspended animation from the moment Half-Life ended to the moment Half-Life 2 began, but in Crysis 3 the protagonist has been doing things in the intervening years that we don’t know about. On top of whatever it was that ended with New York being fucked up for the second time and the evil corporation taking over the entire world. What I’m saying is that I feel like an actor on a stage that’s been set up right next to a cliff edge: I’d feel a lot more comfortable if they’d given us some background.

This is why I liked Prophet a lot better back when he was Alcatraz in Crysis 2, because I felt I could relate more to that character. He was just a dumb marine, severely wounded and piled into a nanosuit that just barely kept him alive, which gave him an essential, very human vulnerability. And then he was shoved in the general direction of a situation he didn’t understand in the least, which also helped, because that was pretty much the same mindset I was in, as the player. I felt like a small piece floating on the surface of a very big, unfathomable crisis. Yes, I think that’s best the word for it.

Roll on Crysis 3, and Prophet now seems to have a much bigger understanding of the situation than I do. Now I feel the game expects me to have a firm grasp of a background that it hasn’t given me. This is the moment when we need some Alcatraz equivalent, perhaps as a sidekick if not the lead – an audience surrogate who doesn’t know what’s going on, so things can be explained to us through them. Otherwise I’m just dumbly going through the motions demanded by the game, lacking understanding and consequently lacking the essential engagement in the action. 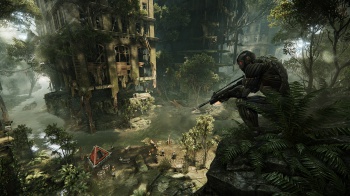 The problem is exposition, an essential component of storytelling that it seems game developers have only been getting worse at lately. Now I come to think about it, it’s amazing how many recent video games have used the plot device pretentiously known as “In medias res” (“in the middle of things”), starting the game mid-way through the significant events in order to get straight to the action. And that’s perfectly understandable because action is what sells and you want the audience to be excited right off the bat. I think I’m going to arbitrarily blame God of War for this trend, with its fondness for ridiculously epic tutorial levels.

But what you’ll note about the plot of God of War is that there were an awful lot of flashbacks in it. And what seems to increasingly slip by triple-A games is that using “in medias res” doesn’t give you a free pass from having to do exposition. You still have to do it, you just have to work it in later in flashbacks and dialogue, and that can be even worse than a lengthy introduction, because it means the pacing, rather than smoothly ramping up, is continually being interrupted for sepia dream sequences and the like. In medias res is like a fad dieting technique: for all its fancy talk and impressive short-term results, you’re still going to have to do sit-ups at some point. You can never escape the need for exposition. You can temporarily push it away, but it’s like a wrecking ball – it will come back and smash your teeth in at some point.

What seems to be the hardest thing to communicate to the entertainment industry these days is that action does not engage without context. It just doesn’t. There is no possible way to be interested in, say, who will win an awesome acrobatic swordfight, without knowing who the participants are and which of their agendas we support. And yet, exposition in action games seems to be treated with extraordinary disrespect. The example that springs to mind is Final Fantasy 13, in which all the characters just tottered about spouting garbage and we were expected to go to an honest-to-goodness fucking in-game glossary to figure out what they were banging on about. Just so exposition wouldn’t get in the way of all the pre-rendered fireworks displays. I’m just saying, if you play Final Fantasy 13, Square-Enix think you’re idiots. And it’s up to you to prove them right.

The other popular technique is of course to sprinkle documents around the place, which combines the necessary exposition with a collectibles hunt. And which does mean that anyone who wants to keep a sense of flow going and doesn’t feel like poking around in every concealed nook gets left behind narratively, and I don’t think having enough necessary background to have any kind of engagement in the story is something that should be left as an optional bonus. That’d be like leaving the stunning twist ending of a film for the DVD extras.

And what you definitely don’t want to do, Crysis 3, is leave documents lying around that blatantly spoil an upcoming plot twist. Twice, by my count. That’s a pretty mind-blowing cock-up as far as storytelling goes. That’s like having the main character in a film taking their shirt off an hour in to reveal the stunning twist ending tattooed across their tits.

Microtransactions Come to Call of Duty