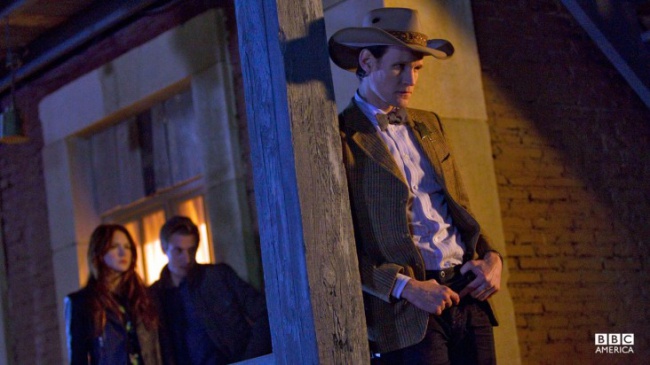 Though I’ve been watching Doctor Who since before TVs came with remote controls, the same cannot be said for all current fans of the series. This is not a bad thing – I’m excited to be able to share something so dear to me with a whole new batch of people. It’s not really fair to expect Newvians (as I call them) to catch up on decades’ worth of lore, so I want to do my part to help by going through each new episode this season, filling in some of the backstory and explaining oblique references when they crop up. This will be part episode recap, part history lesson, and hopefully all enjoyable.

Do you need to know any of this to enjoy the new season of Doctor Who? Nah, not at all. And given that New Who has rendered much of Classic Who moot, you can shrug off almost everything pre-2005 if you want. But it’s fun to explore the roots of a fiction with so much history, and knowing a bit more about the olden days may just entice a few of you to check out the the pre-Eccleston Doctors.

So with that, let’s head off to A Town Called Mercy!

Wow, this episode was terrible. Full-on, flat-out bad. It’s always a little iffy when the Doctor and friends come to America, because the show is British on an atomic level, but this was beyond bad. Even a cameo by Ben Browder (Farscape, Stargate SG-1) couldn’t help liven up this dud. It’s times like this I regret committing to doing this on a weekly basis. Bleh. Well, let’s get this over with.

The Doctor, Amy, and Rory land just outside the Old West town of Mercy, population 81. A line of rocks and wood marks the boundary around the town, and anyone venturing past its limits risks falling prey to The Gunslinger, who apparently has come to exact revenge upon the Doctor.

Not our Doctor, as it turns out, but another alien doctor named Jex who happened to take up residence in Mercy, returning their kindness by hooking them up with basic electricity and curing a cholera epidemic. The Gunslinger is trying to force the townsfolk to give him Jex by starving them out, not letting anyone enter or leave the town. Something is a wee bit fishy, though. Jex claims to have crashed on the planet, wrecking his craft beyond repair, but his species is known for being technological geniuses. The idea that he can’t cobble together some sort of ship to escape is enough of a stretch to send the Doctor into the desert to find his ship – which is in perfect condition, as it turns out. We discover, quelle surprise, that Jex is a war criminal who created the cyborg Gunslinger and many others like him as a way to bring a swift end to an interminable war. The learning process was more than a little messy, however, and many people died in agony before Jex and his fellow scientists had their cyborg soldiers. The rest of the cyborgs were decommissioned, but the Gunslinger went after his creators, looking for a little payback. Jex is the only one still breathing, which puts the Doctor in a bit of a sticky spot – clearly, Jex should pay for his crimes, but just as clearly, he’s been greatly beneficial to the people of Mercy. Moral quandary, ahoy.

The rest of the episode devolves into a tiresome play on Western tropes. The Marshall dies oh-so-heroically trying to spare Jex’s life, but not before he presses his Marshall badge into the Doctor’s hand and begs him to protect the town. This inevitably leads to the Doctor standing before a crowd, cowboy hat perched atop his ridiculous hair, badge winking in the torchlight, sixgun on his hip. Now, it’s not as though the Doctor has never held a gun before, but seeing him quivering his fingers over the handle of a revolver was just a bit more than I could take. Sure, it fit the genre, but it didn’t fit the man. The writers were keen on the idea of a Doctor Who Western, so that’s what they wrote, regardless of how much sense it actually made for the mythology and characters.

What’s worse is that the episode dodged what could’ve been a very intriguing and deep question – when it came right down to it, would the Doctor sacrifice Jex if it meant saving a town full of innocents? He’s more than happy to serve Jex up on a platter before Amy steps in and chastises him in a tone so condescendingly preachy that I found myself hoping she might “accidentally” find herself outside the boundary. Yes, Amy is meant to serve as the Doctor’s conscience – that was established way back in The Beast Below (2010) – but as that episode also proves, she’s certainly not above a dark act if it saves the greater good. She pushed that “Forget” button, right? That entire “We have to be better than him” speech came off forced and fake, something that was said not because it’s how Amy would actually react but because someone had to say it or else the episode would end up about 22 minutes too short.

The Doctor hatches some sort of plan involving putting face paint on various townsfolk to distract the Gunslinger long enough to let Jex get away – which makes no sense at all, because the Doctor is just foisting the problem on other people. If Jex gets away, the Gunslinger will only follow him, putting a different set of innocent people in danger. That’s the solution to Mercy’s problem? Bullshit. Are we really meant to believe that the Doctor will just nip on down to Mexico as originally planned, happy in the knowledge that, hey, at least Jex and the Gunslinger aren’t his problem anymore? Jex resolves the mess by blowing himself up and the Gunslinger slinks into the desert to become Mercy’s unseen protector. It’s all too simple and clean. The Doctor is off the moral hook, the people are saved, the bad guy is punished, huzzah.

Doctor Who has never shied away from the fact that the Doctor is often asked to make difficult, sometimes impossible, choices. How he deals with those choices is (as was discussed in the comments for last week’s column) something that differentiates all the various iterations of the character. To turn a multifaceted situation into hide-and-seek with the Gunslinger followed by a too-neat suicide is insulting both to the show’s lineage and its fanbase. Compare how this played out to something like The Rebel Flesh (2011), which had similar themes of intent vs. result. That episode, and its follow-up, The Almost People, examined different sides of how the ends may or may not justify the means, leaving plenty of room for argument while also being a good adventure. Not every episode will be a good one, but being unentertaining while simultaneously ignoring a golden opportunity to explore the character is not something easily forgiven.

But perhaps I’m being too harsh on this one. What do you guys think? Newvians, if you have questions, this is the place to ask. Long-time fans, share your insight and expertise. Let’s pick this one apart and see where it all went wrong.

We’ll meet here again next week to go over The Power of Three!