Developed and published by Capcom. Available on 3DS. Released on September 8, 2016. Review code provided by publisher.

The Ace Attorney franchise has come a long way from its humble beginnings as a Japan-exclusive GBA visual novel. The lawyer simulator has built up such a ravenous fanbase in the west that it convinced Capcom to release English versions of the series’ last two games – even if they are only available as digital downloads and not as retail copies. Spirit of Justice, the sixth entry in the series, brings Phoenix, Apollo, and the rest of the gang back for their zaniest adventure yet. But is it a little too ‘zany’ for its own good this time around? 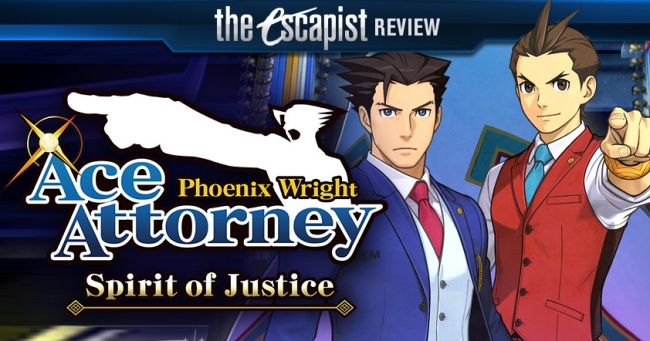 The game itself plays almost exactly the same as its predecessor, Dual Destinies. Gameplay is split into two segments: investigations and trials, and just like all of the previous Ace Attorney you’ll gather evidence and interview witnesses in the investigation segment, then present that evidence and cross-examine those witnesses in the trial segment. Nothing really “new” has been added to the investigation segments since Dual Destinies brought with it new features such as 3D models and backgrounds. It has, however, all been tidied up a bit, as examining objects and locations, and moving around the world, isn’t quite as finicky as it used to be.

The trail segments have a new “seance” feature, in which a spirit medium can channel the murder victim’s last memories to display in a big reflecting pool, and you’ll have to use these seance visions to point out contradictions in testimony.

And herein lies my biggest gripe with the new title. Ace Attorney started off fairly grounded in reality. Yes, there was the whole “Maya is a spirit medium” thing, but it was only ever a small part of the game, which focused on realistic trials involving real (albeit, “colorful”) people and plausible circumstances. I feel like every successive game has been trying to one-up its predecessor in terms of ridiculous magic powers and defense attorney hate, and now it’s come to a head with Spirit of Justice. The game’s first case takes you to the Kingdom of Khura’in, where they have abolished defense attorneys all together. Instead, cases are decided solely on the aforementioned seance visions.

If that’s not enough, the “DC culpability act” that the country passed means that lawyers suffer the exact same punishment as their clients if they fail to prove their innocence. Within moments of arriving in Khura’in, Wright finds himself defending a young boy from a murder charge, with literally both the boy and his own life on the line.

The following case, with Apolo Justice back in “America”, is a bit more grounded (and probably the best in the whole game), but after that we are back in the weird and wacky land of Khura’in where the courtroom gallery chants “DEATH TO LAWYERS” during trials.

Suffice to say, the writing in Spirit of Justice is the weakest I’ve seen in the series so far. While there are some funny interactions between characters and the puzzle-game nature of the courtroom sequences is still really interesting, only a handful of cases really stood out as being well-written with depth, as the rest were just obvious villains trying so hard to shift the blame on Phoenix’s family and friends (how does this agency make any money when they only ever represent their friends for free?) and “plot twists” that you can spot a mile away. It’s not necessarily “bad writing,” it’s just not as good as it has been in the past.

Characterization is really good, and aside from the aforementioned cardboard-cutout villains, all of the new characters have really interesting personalities that fit well with the cases. Some old favorites like Maya return, and the existing Wright and Co. gang still keep their rather… distinctive personalities in check.

While the writing has suffered, the puzzles have never been better. They are difficult, but fair, and I never felt cheated or got frustrated because I couldn’t figure out that exact piece of evidence the court was looking for. There was one point where I had to pick out a specific scene in a video tape that was quite aggravating, as the game was very sensitive on the exact location i had to pick, but other than that the system is quite forgiving on the player when examining and presenting evidence.

The game has a considerable bulk to it and it will take you in the ballpark of 10-15 hours to get through all the cases. You definitely get your money’s worth.

Bottom Line: Spirit of Justice, the sixth game in the Ace Attorney series, is really starting to show some franchise fatigue. The puzzles and the technical systems behind it have improved, but the writing has begun to suffer.

Recommendation: Hardcore fans of the series will still enjoy it despite its flaws. Newcomers may want to check out the original Phoenix Wright trilogy on DS, where the series is at its strongest.