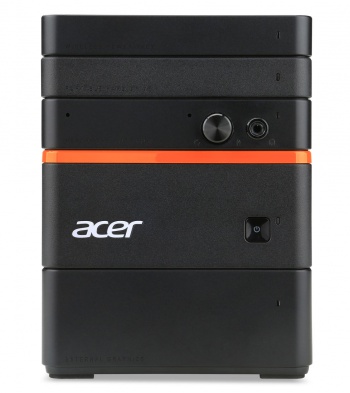 Acer’s new PC, named the Revo Build, will allow users to swap parts in and out, and stack the pieces like LEGO bricks.

Now, most PC gamers will have heard people tell them they should build their own computers. That’s how you save money; get exactly what you need an nothing more; and end up with an object you created, that you can have fun with in your own way.

PC makers are certainly listening in on those conversations. On the heels of Razer’s Project Christine, Acer is stepping into the modular computer world with the Revo Build. This miniscule (5 inches square) piece of tech is made of distinct blocks, representing its hard drive, processor, graphics card, and so on.

These blocks slot into each other via magnetically aligned pins, allowing you to stack the PC like LEGO. In fact, you can build an actual computer tower. Computer technology is in a strange place, right now.

There is not a lot of information on the ground, but with Revo‘s release date fast approaching (October of this year, whereas we still don’t have a release for the competition from Razer), we should be learning more soon.

What we don’t know yet that I’m most curious about is how efficiently do these “magnetically aligned pins” transfer information between blocks? What GPU is it sporting, and how easily can that be swapped? Am I going to be playing Deus Ex: Mankind Divided on the Revo Build, or Invisible War?

But there may be a more important question here: is this better-looking than Razer’s version? I’m thinking yes, myself, but Project Christine does spend all its time bathed in shadow.