I’ve made no secret of my feeling that one of the biggest recurring problems in the games industry is a case of too many cooks spoiling the broth. Development teams being too big, perhaps the industry as a whole being too big, with none of the cooks taking any personal responsibility for the broth so you end up with a lot of gluey unseasoned broth that is just about inoffensive enough to be palatable to mainstream broth audiences but isn’t exactly getting five star write-ups in Broth Monthly.

And almost inevitably there’ll be a few cooks who want to be able to pad their resume and perhaps one day join a better broth making corporation that will let them have creative control of the broth, so they put a lot of effort into polishing the carrots that are their sole responsibility, and then everyone feels like they have to make the carrots float to the top all the time and show off how well polished they are, but the broth isn’t supposed to be about the carrots so I just get kind of put off by the way these carrots are being pushed in my face while I’m trying to enjoy the beef cubes and the radishes. I think this is already the best metaphor I’ve ever written.

It’s particularly odd that a fighting game like MK should employ something like this because a fighting game is only its fighting engine, padded into some kind of challenge framework and a story mode if you’re lucky. Finisher porn sequences are more obviously endemic at present to action-adventure brawlers and hacky slashers like God of War, Bayonetta or Splatterhouse. It’s almost always done the same way. You beat up on random enemy A for a while and when they reach some predetermined point of low health they adopt that universal stunned ‘Finish Him’ stance where their arms hang down and their head waves back and forth like a floppy metronome. Then a button icon appears over their head or on your HUD somewhere, and when you press the button you go into a pre-baked animation where your character does something that would have any playground supervisor in the world trotting over very swiftly to break things up. Like ramming your blade down a minotaur’s throat in God of War or torturing an angel on a clothes horse in Bayonetta (Christ, that was a weird game).

And the effect of this is to completely break the flow of the fight, which is particularly grating in a game like God of War where the regular attack animations all have a really great smoothness about them. Stealing control for such a long, pointlessly violent sequence just takes me out of the experience. Doubly so if it goes to a different camera angle or background, which is always done to hide the fact that the game has to shift the models around for the animation to make sense. 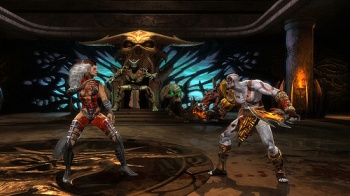 But at least they’re impressive, right? Well, not after you’ve seen the exact same one fifty felch-coughing times. Why do so many game developers have this curious blind spot to the fact that anything that’s part of the core gameplay is going to be seen over and over and over again? They should be emphasizing practicality over spectacle, which is a finite thing. It doesn’t matter how impressive it is to pull a monster’s rectum out with your bare hands, Splatterhouse, if you’re just going to repeat it enough to completely devalue it. Dialogue writers and engineers seem to have a similar blind spot. Hey! Spider-Man! Your witticism was fucking awful the first time; it is not improving with age like a fine cheddar!

I’m not saying finishing moves and special attacks should be cut out entirely, my point is there’s really no reason at all that they can’t fit into gameplay flow. You just have to be able to execute them quick smart and move on. Resident Evil 4 would be a perfect example. You shoot an uppity foreigner in the head or the kneecap, they stagger a bit, press the button prompt that comes up and you serve up a roundhouse kick or a suplex that makes their head explode. Very visceral and very fast, bish bash bosh, away we go, move onto the next one. The Yakuza games, also, expend a chunk of attack power to pound someone into the floor with a street sign, or stomp your heel on the bridge of their nose. Bish, bash and, yes indeed, bosh.

Or look at Batman: Arkham Asylum, it’s got one of the best fighting engines I’ve ever seen in a game and it doesn’t really do elaborate finishers at all, it just flows incredibly well. Punch flows to kick flows to counter flows back to punch. That’s what I mean by “flow.” Each action leads smoothly into the next one and I come out of it feeling like I achieved something that takes skill, not just hit the smoke break button when I’d had enough and let Kratos finish the job.

So this is specific mishandled game feature to think about of the week, listeners: keep the combat flowing nicely and it’ll excite us a hell of a lot more than elaborate decapitation move A. Ask yourself what would carry more dramatic weight: beating someone with a broom handle for five minutes, or knocking them on their ass with a single uppercut to the jaw. See, along with everything else, the second option doesn’t make one wonder why all the victim’s fellow guards/monsters, several of whom are within arm’s reach, don’t intervene or offer them an aspirin or something. Perhaps, as they spectate, they’re mentally calculating their promotion prospects.