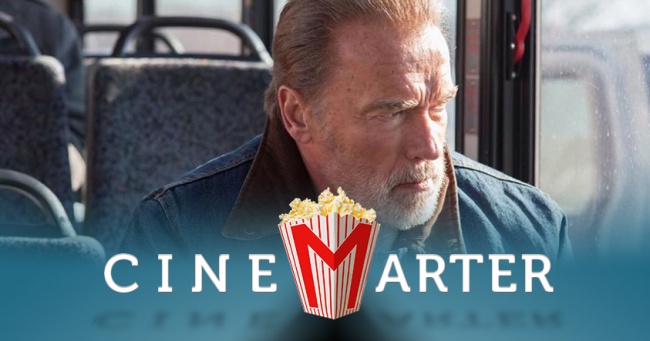 Have you ever watched a movie and thought that a different actor was probably pitched the screenplay, rejected it for one reason or another, and therefore we got the one who wound up accepting it instead? That’s the feeling I came away from with Aftermath, which stars Arnold Schwarzenegger. The role screams for Liam Neeson – right down to Maggie Grace having a do-nothing supporting role – except for the fact that the protagonist needs assistance from a journalist to track down his target. If you’ve seen his last decade of work, Neeson characters do things on their own; they don’t need help. So, Schwarzenegger, who is no longer a significant box office draw or much of a credible action star, was called in to try to show off his acting chops, whatever those may be, in a direct-to-VOD dreary drama.

Schwarzenegger’s character, Roman, is eagerly awaiting a flight to arrive. His wife and pregnant daughter are on board. When he arrives at the airport, he is taken aside and told that there was an accident, the airplane crashed, and that there’s a really good chance that nobody survived. We then switch perspectives, focusing on air traffic controller Jake (Scoot McNairy), who after a series events (some of which were out of his control) winds up contributing to the plane crash – there was a mid-air collision between two planes. 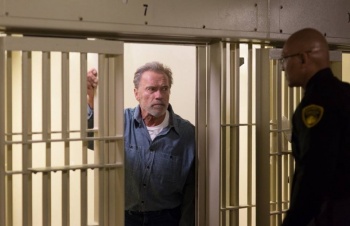 The rest of the film follows both men and how they deal with the grief. One, Roman, who lost his family, and the other, Jake, who helped cause the deaths of dozens of people. Roman wants an apology from the airline and eventually Jake – hence the enlistment of the journalist I mentioned earlier – while Jake falls into a deep depression and eventually has his entire life upended.

That’s … pretty much the entire film, honestly. The last 20 minutes literally cover 10 years of the characters’ lives and try pay off the previous hour of sadness, grief, guilt, and depression, but it doesn’t really feel like it fits, honestly. This is a true story, and these events happened – names, places, and some facts have been changed, but the main points happened – but there’s something that happens in the last 20 minutes that comes out of nowhere, seems like the beginning of a different story, and then we zoom through the consequences and ramifications, ignoring one of the key themes, and just getting to the end for a final eye-rollingly silly scene.

Aftermath is a dull, dreary drama that wants to get somewhere and say something but doesn’t know how, resulting in a film with a late-game tonal shift and a feeling of pointlessness after it’s all over.

Basically, you’ve got this heavy, focused movie about the different ways people deal with tragedy, and then you turn it into something else. I mean, yeah, it happened, and yeah, it can work like that in real life, but thematically and structurally it doesn’t fit the movie. After all, real life can’t skip 10 years at a time; it would actually deal with what happens, instead of skimming over them. And with this sharp jump in time and the final scene, we’re left coming away from Aftermath with a simple question: “What was the point of watching this?” Follow-up question: “Why should we care about any of it?”

Part of that comes from the lack of depth and purpose that comes from the first 2/3 of the film. When we follow Roman, we mostly just watch Arnold Schwarzenegger stare at the ground, contemplatively, and sometimes spout something that might sound deep but isn’t really. Meanwhile, Jake has his life turned upside down and nothing more – his story comes to its conclusion before there’s any payoff to that. It’s just all so pointless – the type of drama that wants to be about something but doesn’t seem to know how to do it.

Arnold Schwarzenegger can no longer (often) believably pull off the action hero role, so he’s trying to do some “serious” acting with films like this and Maggie – man, remember Maggie? Anyway, he’s only rarely good at it, and this isn’t one of those times. Seriously, it feels as if 80% of his screen time is just him staring down at the ground, looking somewhere between sad and perplexed. Maybe that’s why a later action feels so odd – there’s no transition to a breaking point or any indication that he’s undergoing any internal changes; he’s got one facial expression. Scoot McNairy does better, but unfortunately gets a shafted story. None of the supporting actors even register.

Aftermath is a dull, dreary drama that wants to get somewhere and say something but doesn’t know how, resulting in a film with a late-game tonal shift and a feeling of pointlessness after it’s all over. Arnold Schwarzenegger was the wrong lead actor for the role, the story doesn’t fit into the 90-minute time frame – at least, not the way it’s been framed and paced here – and it ends with a scene too silly to take seriously. It’s disappointing.

Bottom Line: Aftermath is a bad drama that can’t get us to care about its relentless sadness.