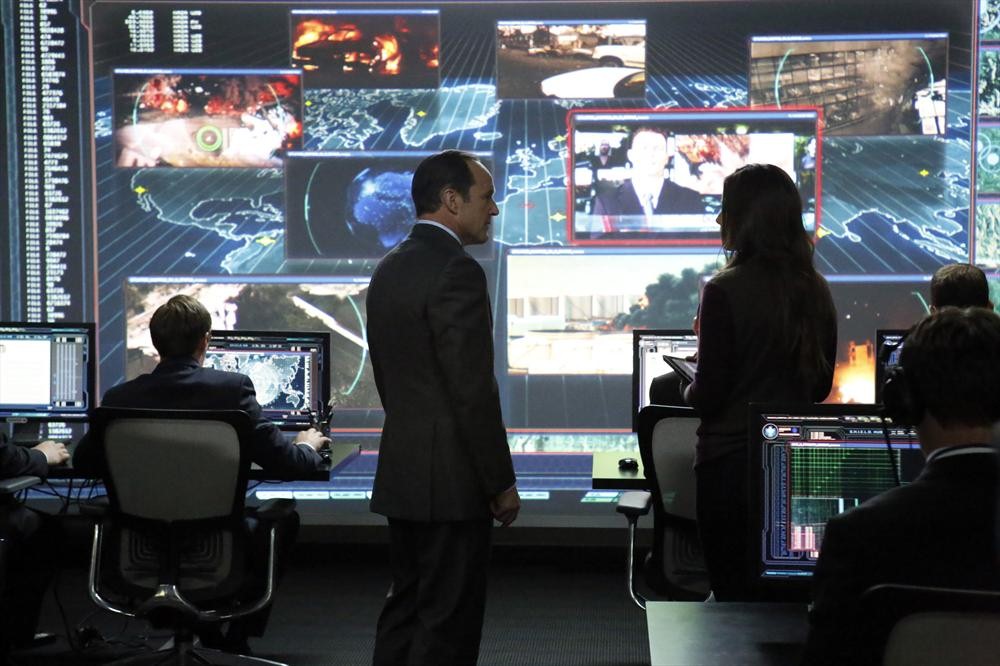 Here’s a mystery for you, Agents of S.H.I.E.L.D.: Is this still part of the Uprising arc, or have we jettisoned that now that who was doing the uprising is no longer a secret? (Unless of course you didn’t see last week’s episode or Captain America: The Winter Soldier, in which case SPOILERS, HO!)

So, where were we again?

We open in the prison cell of Raina, aka “The Girl in The Flower Dress”. Ward enters, gives her a gift of another floral-print dress (“From The Clairvoyant”) before spiriting her off to Cuba for a meet up with Garrett. She’s visibly upset to learn that she was not actually serving some sort of mystic this whole time, and looks even more shocked when Garrett welcomes her to HYDRA. I wonder what “normal people” in the Marvel Cinematic Universe think of HYDRA, actually – those with firsthand experience appear to get that this is an organization that affiliated itself with The Nazis mostly out of convenience, but does the average person just think of them as Nazis? Is Raina’s surprise partially about being a woman of color wondering how she wound up working for guys she might regard as Skinheads?

Speaking of pursuit, Team Coulson is busy repairing The Bus when they’re contacted by Col. Glenn Talbot (Adrian Pasdar) to inform them that he and a “peacekeeping force” will be coming to question them. Coulson suspects that it won’t be quite so peaceful, (partially because in the wake of Winter Soldier the entirety of S.H.I.E.L.D has been classified as a terrorist organization, partially because Talbot has only ever had one character trait in 50 years of Marvel continuity: He’s a dick;) so Coulson decides they’re just gonna take off and figure out Step 2 on the move. 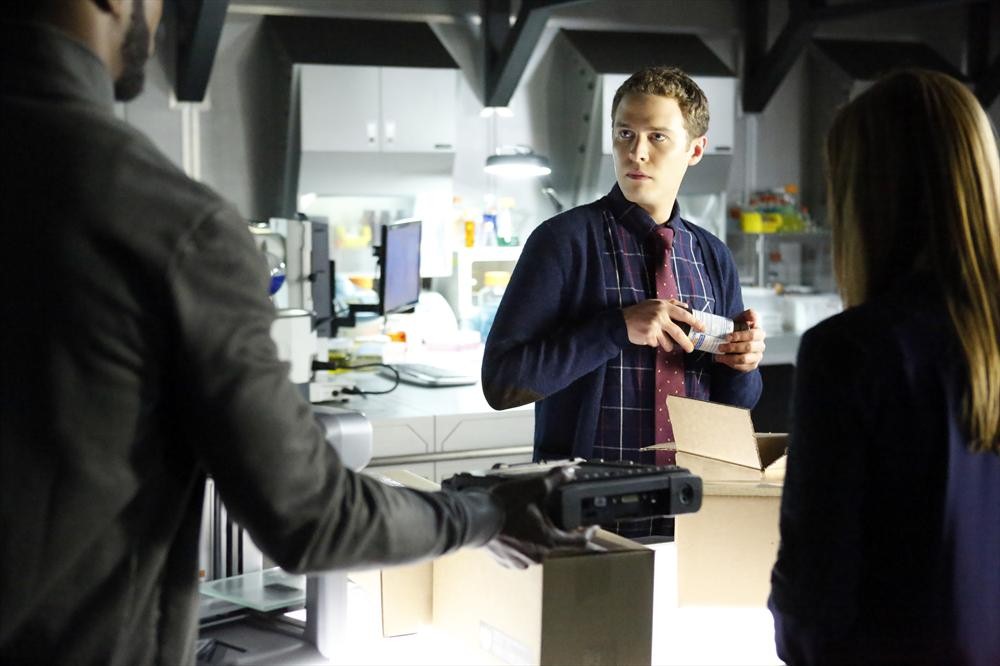 He also resists letting Garrett’s (apparently) non-HYDRA ex-partner Agent Triplett (short version: Agent Ward, but Black and likable) join them, but relents when Agent Simmons reminds him how much story potential their mutual attraction and its effect on Agent Fitz has for Season 2. Speaking of setups, he orders Skye to… “hack the entire internet,” I guess (honestly, after screening a certain Johnny Depp sci-fi movie last night, Agents’ vastly less idiotic grasp of how computers work doesn’t bother me anymore) in order to erase every trace of the team’s existence from the web. Not sure how that’s going to work now that Black Widow made sure that information has probably been downloaded by billions of people at this point, but whatever. It’s a TV show. More pressing matter: The Bus is leaking fuel, but can’t risk landing and being detected by Talbot.

Back in Garrett’s HYDRA safehouse, he reveals to Raina that he smuggled a bunch of (what he doesn’t know is) alien(?) blue-blood from the mystery bunker and wants her to start incorporating it into CENTIPEDE’s ever-amusing “improv” method of super-soldier making – along with that all-the-important-stuff hard drive Skye left with Ward last time. The two men take off for The Fridge (the S.H.I.E.L.D. site where dangerous objects/persons are held) to grab more cool stuff, but not before some exposition to confirm what’s up with Ward: He’s loyal to HYDRA because Garrett rescued him from the abusive childhood alluded to in The Well; his original mission on The Bus was to gather intel on Coulson’s resurrection; and everything he did while there (including saving Simmons’ life in F.Z.Z.T. and his No-Strings relationship with May) was calculated to gain trust. Oh, but he’s clearly still carrying a real torch for Skye, because… y’know what, we’ll talk about that at the end.

Coulson has asked Skye to gather up everyone’s S.H.I.E.L.D. badges, since those now mark them as targets. But suddenly, his badge lights up with numeric coordinates, which he immediately believes must be instructions from Nick Fury. This is Coulson back in his Avengers role as the MCU’s in-universe Top Fanboy. Of course he refuses to give up on S.H.I.E.L.D., and of course he assumes Fury can’t be dead. The others are less convinced, and May drops another bombshell: Fury ordered Coulson’s revival, but didn’t conduct the mind-wiping himself – making it possible that Coulson could be under HYDRA-influence.

Oy. At this point, Coulson could win the undying favor of every single person watching by responding to any further information being offered in relation to his comeback with: “Shut up. I just don’t care anymore.”

Garrett, Ward and company trick their way into The Fridge (which turns out to be another giant, super-conspicuous skyscraper because… secret?) where they free a bunch of captive CENTIPEDE goons and pillage the WWII-era HYDRA laser from 0-8-4 the Berserker Staff from The Well and presumably anything else from the handful of times something actually interesting happened in the first half of the season. Ward teases that Coulson let him know about something really special on a floor that’s not supposed to exist…

Team Coulson follow the coordinates to a seeming dead end in the snowy Canadian wilderness, wherein Coulson finally loses his cool with the situation – angrily ranting to… the world, really, what everyone already knew: That he has no idea what to do with himself in a world without S.H.I.E.L.D., and that he intends to go on being an Agent no matter what reality has to say on the subject. It’s a good moment, though I imagine it’d be better if the first half of the season had done a better job making us like S.H.I.E.L.D. as much as Coulson does.

But oh well: Coulson has a conversation with an automated gun turret (don’t ask) and the team is invited into a hidden cave that contains… a Nick Fury off-the-books safe house, maintained by Agent Eric Koenig (the mighty Patton Oswalt.) He’s got food, provisions and some comfy “Hey, wouldn’t this make a great hub-locale for Season 2??” digs for The Agents, and a special message for Coulson’s ears only: Nick Fury lives!!! …which is not a surprise to anyone who saw that recent movie you kind of had to see (or have spoiled) in order to understand anything that’s happened in the last three episodes of this show. But hey, Clark Gregg has a great “I’m happy now” face, right? 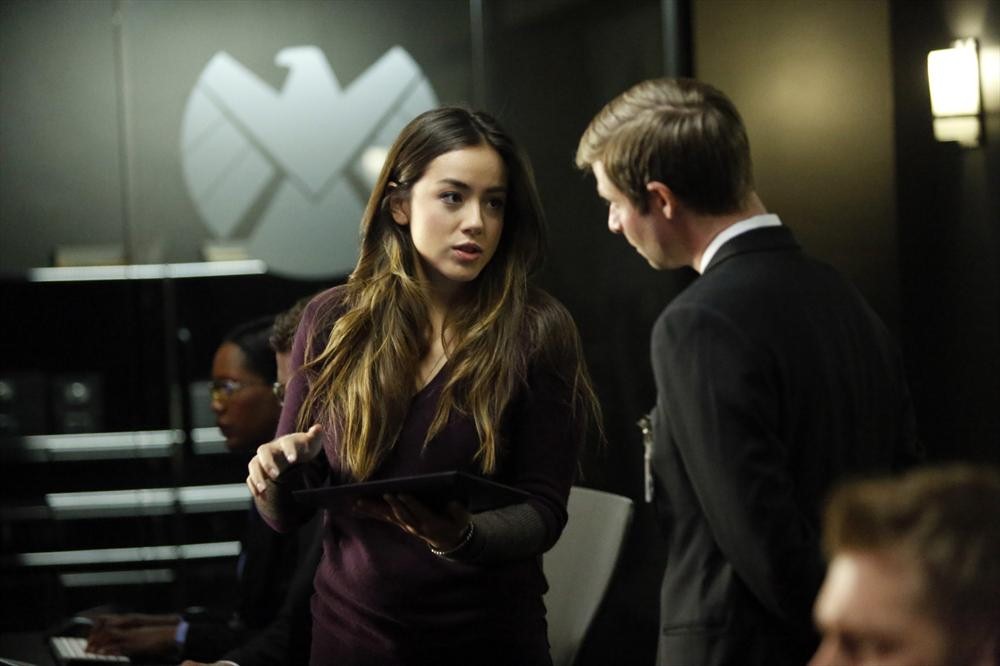 Back with CENTIPEDE/mini-HYDRA, Ward takes a call from Skye letting him know exactly where they are (by Odin, it’s astonishing that only one evil terrorist organization infiltrated and took S.H.I.E.L.D. over, when you think about it…) Which is fortunate, because it turns out only Skye can unlock that hard drive for them. Solution? Ward is going back undercover, complete with a “make it look real” beating from Garrett during which we glimpse some kind of metal (cybernetic?) plate on the senior Agent’s side. Hm…

As a final stinger, Ian Quinn joins the other baddies to exchange villain banter, and Garrett has a present for him: His cache of Gravitonium.

Full details of The Only Light In The Darkness are not being widely revealed, save that the episode will involve Coulson attempting to protect the one time love of his life, Audrey (“The Cellist” mentioned in The Avengers) from the chaos unleashed by HYDRA. Promotional clips strongly suggest that Skye will figure out Ward is HYDRA pretty soon.