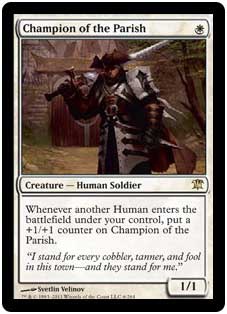 Today we’ll take a closer look at the Aggro archetype, which was previously described as “a strategy that aims to win by producing maximum damage output in the shortest number of turns.” In terms of damage, it can be useful to have a baseline by which to compare each of your cards before including them in your deck. I believe Lightning Bolt is one of the best cards to look at here, as its cheap cost and 3 damage output is generally heralded as the most efficient burn spell in Magic. Of course, Lightning Bolt is not currently in Standard and its replacements, Shock and Incinerate, are noticeably less effective at what they do. But this is what we’ll be aiming to do with creatures in our Aggro deck. We’re trying to convert each spell into maximum damage output, treating our small creatures as basically walking Lightning Bolts or, at the very least, Shocks.

Let’s start with some basic first turn creatures. Red’s Goblins tend to make for great fodder in an Aggro deck. They can sometimes come in very efficient packages. Look at Goblin Guide, for example, which was the go-to card for Red Aggro with Zendikar Block. He’s a 2/2 with Haste for 1 mana! At worst, this guy is a Shock, and he’ll often get in for at least 4 before trading with an early blocker, making him more efficient than a Lightning Bolt. White has access to Elite Vanguard, which is the new Savannah Lions. White Weenie(WW) decks often love this high-powered 1-drop. While he’s not as powerful as Goblin Guide, he can definitely get in for decent damage early in the game, though he’s weak to 1-power defenders. Blue has Phantasmal Bear, a 2/2 for 1 mana with an aversion to being targeted. Finally, check out Memnite! He’s a 1/1 for 0 mana! He works especially well on first turn with something like Glint Hawk or Kuldotha Rebirth, either of which lets you get in for 3 damage on Turn 2!

Those are some solid basics, but we should be sure to keep card potential in mind. While a 2/1 for 1 mana is good, you might see more potential in other cards such as Champion of the Parish or Stromkirk Noble. Champion of the Parish is great in a Human-based deck. First turn Champion followed by 2 Humans in the second turn means you’re still swinging for 3 second turn, and he’s backed up by a 3 toughness making him much harder to kill with early game blockers. Stromkirk Noble, similarly, is amazing if left unchecked. Each turn he gets bigger, as long as he’s hitting the opponent, so his potential is huge. He can win a game by himself in only 6 turns if they can’t stop him! Blue’s got Delver of Secrets which, in the right deck, can be a 3/2 Flier on turn 2. It doesn’t have quite the same potential as Stromkirk or Champion, but it’s very efficient for Blue(or any color, really) with very little downside. Of course, as the game goes longer, the more answers an opponent is likely to have for your threats, which means that the 3 damage from Champion or Delver on turn 2 can be very important, as opposed to the unrealized potential of a Stromkirk, who only deals 1 damage on turn 2.

Now what about the high-end of your mana curve? What makes a card worth including in an Aggro deck when it costs more than 1? How much can it cost before it stops being worth it? On the whole, Aggro will keep the high-end of the mana curve down to 3 or 4, meaning that the highest costing spell in the deck will have CMC (Converted Mana Cost) of 3 or 4, depending on the build. A Goblin-based Red Aggro deck, for example, may max out their curve with Goblin Chieftain. Having Haste and giving other Goblins +1/+1 and Haste for 3 mana can be a pretty sweet deal. With 3 other vanilla 1/1 goblins in play, dropping him on turn 3 means you’re swinging for 8 damage! Hero of Oxid Ridge is another excellent choice for Red at 4 mana, giving an Evasion ability to your creatures and pumping them up with Battle cry! 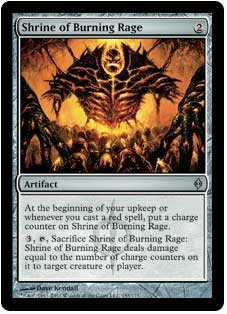 White has Mirran Crusader at 3 mana who has Double strike, as well as Hero of Bladehold at 4 mana, which puts more creatures into play whenever it attacks! On its own, Blue doesn’t have too much to include at higher mana costs. The Illusion Lord, Lord of the Unreal, only costs 2 mana, so you can easily assemble a mono-blue Aggro deck that tops out at 2 mana, allowing you to include more spells and less lands while still reliably getting the mana you need for any spell in your deck. If you’re playing UW, you get access to Geist of Saint Traft for 3 mana, which is a 2/2 that summons a temporary 4/4 flying angel each time he attacks! Throw an Angelic Destiny on Geist and he can end the game in 2 turns!

With Angelic Destiny comes the topic of Utility. This is what makes the difference between a stack of creatures and land and a powerful Aggro deck. Sure, you can just throw all of your Goblins together and call it a day, but what happens when the game goes long? What if your opponent gets their blockers out early and you can’t get that last few points of damage through? Enter Shrine of Burning Rage. This is nearly universally included in Red Aggro decks as a 4-of at this point. The Shrine gets a counter every turn and every time you cast a Red spell. If you can drop it on turn 2, it’s going to slow down your attack, but it’s almost always going to be worth it in the long run. After only a few turns and a few spells (almost all of which would be Red, mind you) you’re going to be sitting on a 10 damage bomb waiting to go off in your opponent’s face. By the time you need to eek that last few points of damage through, your Shrine will be ready for action! Some other Utility comes from Lord effects, like you see on Lord of the Unreal and Goblin Chieftain. When you’re playing with lots of little creatures, this +1/+1 bonus can practically double your damage output. Other effects like Battle cry, as seen on Signal Pest can also have game-changing effects on the amount of damage you can deal. Finally, White has Honor of the Pure, which is basically just a Lord effect for all White creatures. That and a Knight Exemplar are all the Utility you’ll need in a White Knights deck!

How about an example deck to close out the discussion here? I’ve neglected Black entirely in this article, so I’ll show it some love here. Behold, Vampirism! Okay, it may not be exactly awe-inspiring, but it’s a pretty typical example of an Aggro build. Check out the mana curve on the right. I’m stretching it a little bit here considering my mana base and going to 5 as my high end, though I’ve only included 2 of those. Everything else in the deck is 1-3 mana. I might do well to add a couple more lands in there to ensure I can cast my Anowon, the Ruin Sage when he comes up, but other than that, you should see a 1-drop every opening hand, either 2 more for turn 2, or a 2-drop, then curve into Vampire Nighthawk on turn 3. From there it’s a cakewalk. Captivating Vampire is great against bigger creatures; why kill them when you can take them? There’s some utility in the Blade of the Bloodchief, Captivating Vampire, and Feast of Blood, not to mention Gatekeeper of Malakir and Guul Draz Assassin who double as both removal and damage-dealers. And, of course, there are plenty of small, efficient creatures ready to take down an opponent’s life total. That’s Aggro for you.

So what’s your favorite Aggro build? Do you play Red for Goblins, mono-Blue Illusions, or something more unique like Angry Kitties a la Loading Ready Run? Do you like mono-colored builds, or do you prefer multiple colors in your Aggro?