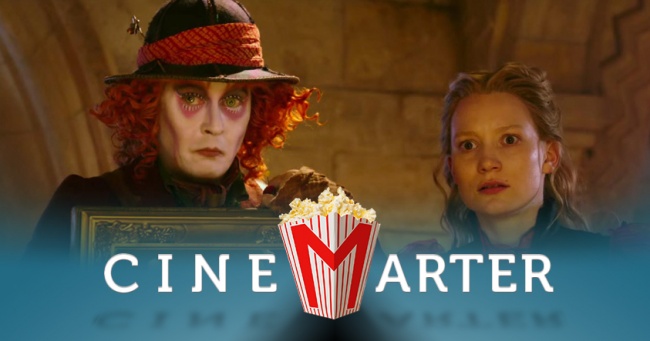 Thanks to a perfect storm of events – one of the biggest being that it was the next “big” 3D movie after Avatar reinvigorated the gimmick’s earning potential – 2010’s Alice in Wonderland made over $1 billion at the box office, despite not being a very good movie. You ever go back and rewatch it? Once the spectacle is removed, all you’ve got are some lovely visuals and Johnny Depp with silly makeup and a stupid accent. The latter isn’t a good thing. It’s been six years since the first film, but now we’ve got a sequel: Alice Through the Looking Glass.

Alice (Mia Wasikowska) has spent that time becoming the captain of a ship and sailing around the world. She’s good at it, but due to circumstances beyond her control, she might not be able to do it anymore. However, after being given this news, she’s finds herself stumbling into Underland, a magical land filled with talking animals and crazy people. Her friend from the first film, the Mad Hatter (Depp), has gone off the deep end – even further than usual – and it’s up to her to save him. He believes his family is alive, even though they almost certainly are not, so she has to steal a magical MacGuffin from Time (Sacha Baron Cohen) to travel back to the past and save them so they’ll be alive in the future. 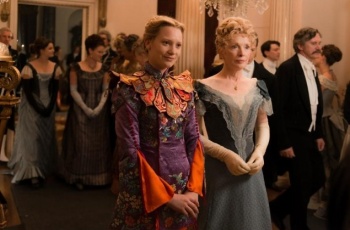 At least, that’s the hope. Plans never go according to, well, plan. Alice travels through time a few times, trying to figure out how to save them, all while Time chases her, the Red Queen (Helena Bonham Carter) does evil Red Queen stuff, the White Queen (Anne Hathaway) waves her arms around like she’s swatting at slow-moving flies, the rest of the supporting cast mumbles nonsense, and nothing actually gets accomplished – except that Alice’s decision to not listen to Time might result in the entire universe being destroyed. No biggie.

Why does it have to be Alice? There’s an in-universe explanation, but the truth of the matter is that she’s the deus ex machina for the characters in Underland. She shows up out of nowhere and fixes all of their problems, usually without much challenge. There’s never any doubt that she’ll succeed, which ruins any attempt at the film to generate suspense. She’s also the only interesting character in the film, which means while we should care about her quests, since they’re only being done for others (about whom we don’t care), it creates a great deal of apathy from the audience.

Alice Through the Looking Glass has been made because the first made lots of money, and when monetary reasons dominate creative ones, the result is almost never good.

Alice Through the Looking Glass does attempt to build its characters, although it does so almost exclusively through familial conflicts. Alice and her mother fight right before she travels to Wonderland; the Mad Hatter and his father never saw eye-to-eye; and the Red and White Queens have had a tiff with one another dating back to their childhoods. There isn’t much focus on these conflicts, and they’re resolved way too quickly and safely, but the film does have them. Partial marks, I guess. The other big theme is how you shouldn’t waste any of the precious time you’re given in life, which sounds good on paper until you realize you just sat through two hours of a terribly boring movie.

This sequel doesn’t even get to brag about the visual effects or the world design that the first film had. Much of this one takes place inside. Beyond the Red Queen’s castle and Time’s headquarters, this is a drab looking film. The effects aren’t bad, but they’re not memorable or used for creative means. More often than not, it’s just special effects for the sake of it – like the audience expects 75% of the film to be generated by computers, so that’s what happened.

Most of the time, though, we just watch Alice watch things that happened in the past, and then try to use that knowledge in the present. There isn’t much action, adventure, fantasy, drama, or thrills. It’s like a cinematic pop-up book so pointless because it’s been aimed at three-year-olds, and they’re just here for movement and color anyway. Not even the actors seem to care. Depp doesn’t even bring his typical energy! Mia Wasikowska looks bored. The supporting cast members monolog their way through the entire production. This is an obligatory “because the first made too much money not to do a follow-up” movie.

An unnecessary, late, and dull sequel to a movie that wasn’t very good in the first place, Alice Through the Looking Glass features characters you won’t care about, locations less enjoyable than the original, a plot that meanders and is as mundane as they come, and a central theme that makes you feel bad for wasting your time on this nonsense. Alice Through the Looking Glass has been made because the first made lots of money, and when monetary reasons dominate creative ones, the result is almost never good.

Bottom Line: A bad sequel to a bad movie, Alice Through the Looking Glass will make you feel like you wasted your time.

Recommendation: Skip it. Don’t waste your precious time on it.