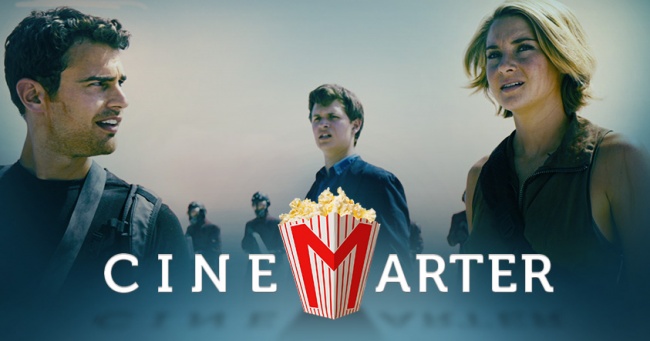 There’s a new rule when it comes to movies based on young adult book franchises: if your series survives past the first film, you’re allowed to continue it all the way to the end, and also split the final book into two movies, because that way more money will be made. Harry Potter did it. Twilight did it. The Hunger Games did it. And now it’s Divergent‘s chance. The third movie is called Allegiant – as is the third book – but it doesn’t tell the whole story found in the novel. We have to wait for Ascendant, which sucks not because Allegiant is some great film, but because it’s all building toward events that we won’t get to see for at least another year.

After the Wicked Witch of the West was wiped out in the last film, the ruins of Chicago have been taken over by Evelyn (Naomi Watts), who has taken to doing the same things as the last leader, except that the class system has been abolished. Tris (Shailene Woodley) and Four (Theo James) still aren’t happy, so they decide to go over the wall surrounding the city. They take with them Christina (Zoe Kravitz), Tris’ brother Caleb (Ansel Elgort), and Peter (Miles Teller). What do they find? A technologically advanced society run by David (Jeff Daniels), who have been studying and watching the Chicago residents for 200 years. 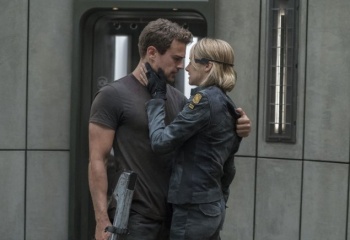 Why? Genetics. People fiddled with genomes, which caused war, and now they’re trying to figure out if people will become “pure” in isolation. Tris is “pure.” If you weren’t already aware that she was The Special, there’s a line of dialogue in this film that literally says “you are the only one.” David wants to use Tris to figure out how everyone can be made pure. The series wasn’t content with dealing with class structure; it now wants to deal with genetic purity. Interesting ideas, and it sure would be nice if the films were smart enough to actually have anything poignant to say about the concepts.

There are also a couple of subplots. Chicago descends into a turf war between Evelyn and Johanna (Octavia Spencer), Four discovers that some things might not be right in this futuristic society, and Peter reminds us that he’s the Big Show of this franchise when it comes to face and heel turns. There’s a lot of plot that Allegiant has to deal with, which might be why most of its running time is devoted to that and almost nothing else, while its final act gives us a ticking time bomb used to (1) provide us with an immediate goal to solve in order to make us feel like we accomplished something, (2) resolve a couple of loose threads that it didn’t want hanging, and (3) further build toward the final chapter.

Allegiant is more of the same, but with the bonus of it being predominantly building to something that you don’t get to see pay off within its confines.

Yes, this film does the same thing that its first-part predecessors did by spending the vast majority of time setting up dominoes that we won’t get to see fall until the next film. As a standalone entry, that makes it the worst so far of the series. It’s the same generic stuff we saw for two previous films, but at least things happened in those. This one takes its sweet time trying to figure out a way to fill its two-hour running time, and while it does accomplish a fair bit of world-building, there’s almost no payoff.

I’ll say the same thing I say with all of these first-parters: All of this buildup might pay off tremendously after we see the next installment. Given the series’ track record, I highly doubt that’ll be the case, but I like to take a wait-and-see approach.

Beyond its first-part problems, Allegiant has a few other issues that need addressing. Theo James continues to be an unbelievably bland actor, and in this one he’s forced to come to a revelation that’ll surprise only those of you who have never seen a movie before, and then try to convince someone else. Despite how obvious his revelation is, she doesn’t believe him – and we can’t blame her; he’s so unconvincing that he can’t convince someone of a statement equivalent to “Umbrella Corps is evil.” Shailene Woodley continues to do the worst work of her career not found in Moola, not because she’s especially bad but because she looks bored – “Lawrence got Hunger Games, and I’m saddled with this?” Ansel Elgort and Zoe Kravitz get little to do until the end. New-to-the-series Bill Skarsgard is noticeable, as is Nadia Hilker, whom I’m sure will play a bigger role in the next one. Of the older actors, the only one who leaves an impression is Jeff Daniels, and that’s because he gets enough time on-screen to do so. Naomi Watts, Octavia Spencer, Maggie Q, and especially Ray Stevenson are reduced almost to afterthoughts.

Allegiant is a film heavily reliant on CGI. Some of it looks great, but there are a few scenes where it needed polish. Some of the green screen felt off, too, like you could actively tell the separation between the actor and the background. A few shots are pretty poor – I think of one close to the end of Theo James running through the desert, with the camera following him from the tops of his shoes, only showing the sky and James from his belt up. And some of the dialogue continues to be laughably bad, but that’s par for the course at this point.

The Divergent series has never been particularly good – or even interesting; it’s about as bland as these things go. Allegiant is more of the same, but with the bonus of it being predominantly building to something that you don’t get to see pay off within its confines. It’s like being told you’re getting a cat for Christmas, but then when the big day comes around, all you get is a card that says your parents meant next Christmas, not this one.

Bottom Line: The worst of these films so far, this one is more bland, generic nonsense, but with the bonus of not even allowing us to have any of its elements pay off until a year from now.

Recommendation: If you’ve seen the first two, you might as well stick around for the sake of completionism. If you haven’t, stay away.