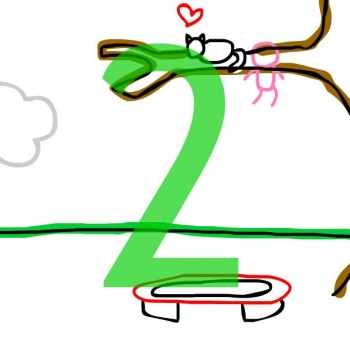 When The Bomb Goes Off

You remember that one scene from Terminator 2, when Sarah Connor dreams about the nuclear apocalypse wrought by Skynet? If not, it’s on YouTube (Warning: It can be a little disturbing). When you think about it, that’s … pretty much what an actual nuclear attack would be like. You’d be going about your daily life, minding your own business, and then … a blinding flash, searing heat, and finally nothing at all.

That’s the general principle behind Tom Sennett’s When The Bomb Goes Off, though the game takes a slightly more lighthearted (relatively speaking) look at the idea. The nuclear apocalypse is imminent, and everybody has one last thing they want to do in their lives in the five seconds before the bomb hits. So you have to help them in a series of WarioWare-esque microgames.

Accompanied by the lighthearted saloon-ish piano of Scott Joplin’s “Original Rags,” When The Bomb Goes Off is a more sentimental take on the end of all things in a ball of atomic fire, but… don’t think about it too hard, or it gets sort of, well… less cheerful, and more unnerving.

(Thanks for the tip, AlexanderAstartes!)