I’ve got a question for my American readers. It’s a simple one. Why do you hate things that look good? Do you all just genuinely have the aesthetic sense of a kipper, or is this part of that big “defiance of authority” thing you guys have going that makes you equate “stubborn pig ignorance” with “down homey wisdom”? To get to the point, why does all your localized box art fucking suck ass?

I know it’s supposed to be a marketing thing, in the same way that every single movie starring Will Smith just uses an extreme close up of Will Smith’s face as the poster for the sole reason that he’s the most bankable film star in Hollywood (‘cos he’s black, but not in a way white people find threatening) but my reading of good, marketable box art is that it should (a) bring across an idea as quickly as possible, (b) catch the eye and c) be readable from a distance. With that in mind, what’s with all the Photoshopped blue-tinted collages with a bunch of floaty head characters like there was a point during the game’s continuity when the main characters all stood really close together on boxes of varying heights and stared thoughtfully into the middle distance.

Case in point, Heavy Rain. I like the Japanese box art best since it’s simple and brings across the main threat that drives the plot (the plot that starts about four hours in). In Europe, still minimalist, a paper figurine probably getting very soggy. And then comes the US box art, and lo and behold, floaty-head Photoshop collage-o-vision with extra points for having the principal sex object front and centre in her underpants.

I know this isn’t exactly an earth-shattering games journalism expose. The shitty American box art thing has existed for a very long time. Everyone’s seen that courageously atrocious cover Megaman was given for its release in the West, featuring a man getting to grips with his four ill-fitting prosthetic limbs while trying to take a massive poo, and that was back in the NES days. But my feeling is, if this is still an issue after 24 years, then obviously people like me haven’t been harping on it enough. So here we go again. And make no mistake, it is a problem. Who knows how many people lost out on a great gaming experience because the first impression didn’t immediately seize? Even a triple-cunted hooker would find business slow if she went around in an Argyll sweater and wellies. Then again, some people are into that.

The other classic example that appeared briefly in my Shadow’s Tale review is Ico, precursor to Shadow of the Colossus and a game everyone really should play. An impression which one definitely would not receive from the US box art featuring an angry Uncanny Valley resident thinking that if he turns around and that giant floating ghost head is still behind him then he’s going to give it what for. Everyone else’s box art was actually indicative of the game: a uniquely art directed world far bigger than you that’s as lonely and bleak as all hell. 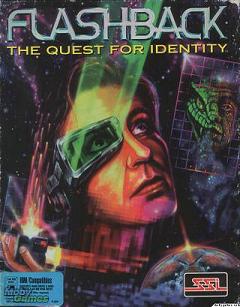 There are too many examples for a complete list, but whenever I think about this subject, and I think about the games that were really hit hard by this trend, the ones that outside the US had, not just slightly better box art, but truly exceptional art that the American version ground unfeelingly into the sand, I think of Delphine Software. Based in France, Delphine created some of the best games to come out of continental Europe in the early 90’s, and what did they get in return? Shitty American box art. And bankruptcy in 2004, but mostly shitty box art.

The first example is Future Wars, Delphine’s early sci-fi point and click adventure, which was a) about a window cleaner travelling through time to save the human race and b) about as good as it sounds, but when I was young the box art was what made me buy it. It shows our main character’s humble origins, of his smallness in the face of the city’s massiveness, with the stars in the paint hinting that he is destined for greatness. Although he’s supposed to be a window cleaner, so I’m not sure why he’s got a can of paint up there.

America didn’t want that box art. It wanted this box art. Look at it. It’s a mess. All those floating elements look like random bubble gum stickers someone put all over their pencilcase. Also, note the tits.

Next, Flashback, probably the best game to ever come out of France, a roto-scoped platform adventure with the physics of an action movie being filmed by a camera fixed about fifty yards away. The European art is simple, readable, and instantly makes me want to know what this man’s so startled about and who’s pointing that orange laser thing at his face. The US art comes right back to messy collages and an artist who had only found the pixelate function on his art program that very weekend.

But the cruellest example for me is Another World, the spellbindingly atmospheric polygonal odyssey near enough solely developed by Eric Chahi, who also hand-painted the fantastic original box art. Fantastic, because it prominently shows the titular Another World that the game is all about. Now admittedly this was used in the US for the DOS version (renamed Out Of This World for copyright reasons), but this was also the first game of Delphine’s to get ported to consoles.

The art for the US Genesis version looked like one of those illustrations old-style pulp sci-fi publishers used to pump out for their covers, forcing the writer to come up with the actual story around it. OotW is about a struggle against a hostile alien culture, the big black monster only appears right at the start and you never get to shoot it. And what’s everyone doing on extremely narrow rock mesas? At least the art for the SNES version couldn’t possibly get any woAAARGH…

Why do you do these horrible things to the French, America? And after they gave you that lovely statue, too.