Developed/Published by Harmonix. Released on December 9, 2015. Available on PS4. Review code provided by Publisher. Full Disclosure: Reviewer is a backer of Amplitude’s Kickstarter campaign at the $20 level.

Every year there are a small handful of excellent games that gain near universal critical acclaim, but for whatever reason, still manage to fly under most people’s radar, often winding up on lists of “Best Games No One Played,” by the end of the year. In 2003, this was Amplitude, a rhythm action game that was the sequel to the similarly under appreciated Frequency.

Despite not achieving much commercial success, Amplitude was, and still is, beloved by rhythm gaming fans, which prompted Harmonix to reach out to those fans directly through Kickstarter to fund a modern remake. Here we are about a year and a half later, and Amplitude returns with updated visuals, a completely new track list that brings that game back to its electronica roots, and more of the same relentless rhythm action that will give your eyes and your fingers a complete work out on the harder difficulties. 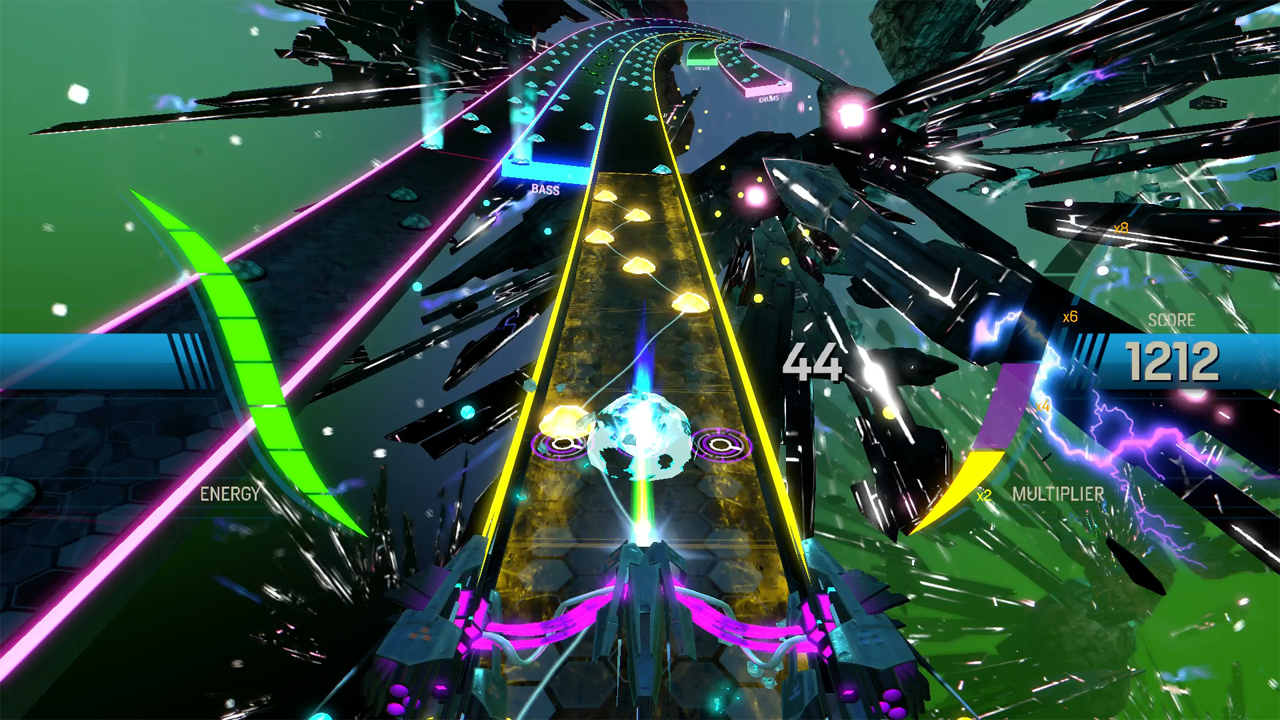 The gameplay of Amplitude has players moving a ship, known as a Nano Blaster, around six different highways, with each highway representing an actual instrumental track in the song. Gems will fly down each of the highways in accordance to the beats of the music, and players must shoot them down with their Nano Blaster to score points. Each highway is broken up by sequences, and in order to clear the sequence, blow up a portion of the highway, and score points, you must hit each note within the sequence perfectly. Miss, and you take a point of energy damage. Energy can be regained by clearing sequences or reaching song checkpoints, but take too many points of damage and it is game over.

In order to keep a streak going and score big points, after clearing a highway, you’ll need to quickly jump to a new one and pick up the beat immediately, forcing you to not only focus on the notes that are coming at you on the current highway, but also on the next highway you’re planning on jumping to. It can get quite challenging, but few rhythm games can match the satisfaction that Amplitude gives when you’re able maintain a long streak, moving from vocals, to drums, to synth, to bass, and then back to vocals, clearing each sequence perfectly and then picking up the next one immediately.

That being said, Amplitude‘s design isn’t perfect, and all too often I found myself clearing a sequence, only to have to jump to a highway that was off screen, thus giving me no way to actually see what note was coming up next. Also, the PS4’s trigger buttons are not designed to be pressed many times in succession, which makes certain songs that require multiple quick presses of R2 a bit frustrating. The controls are completely customizable, but I couldn’t find a control scheme that was intuitive enough to make me want to actually switch out of the default scheme that maps the right blaster to R2. 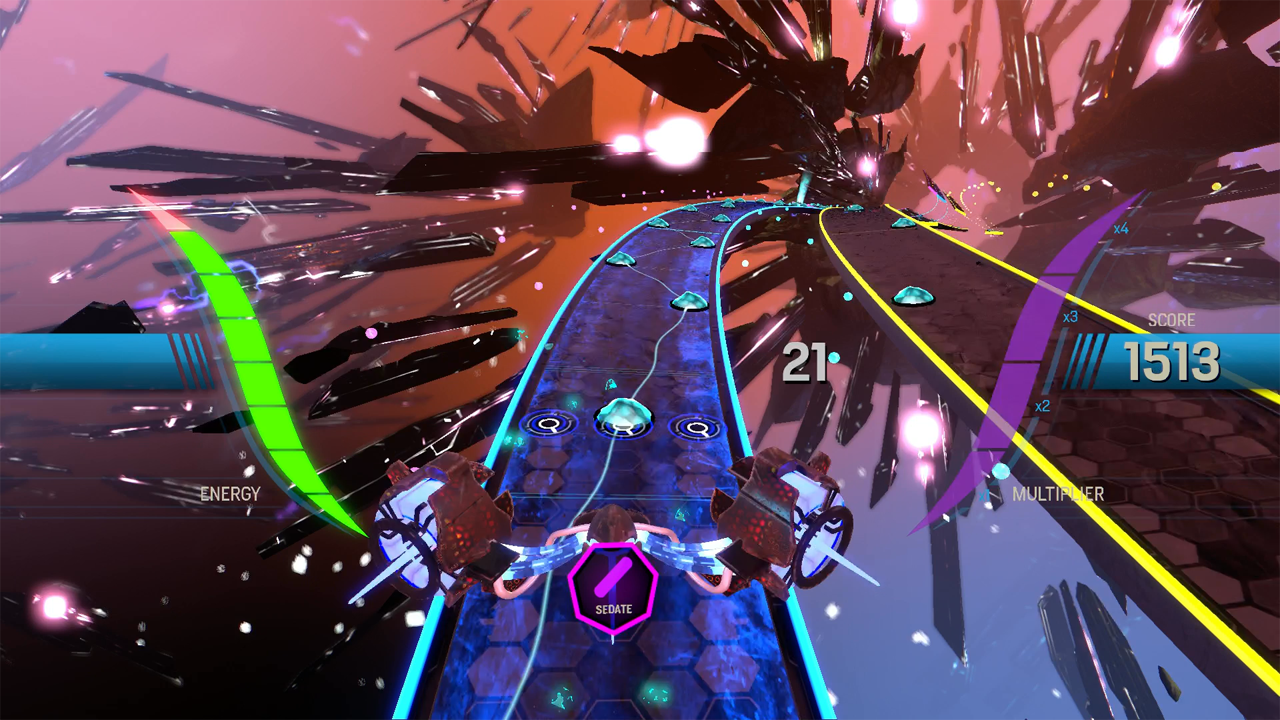 Players can acquire a variety of power-ups either to aid them in surviving a particularly tricky section of a song, or to maximize their points. The sedate power-up slows the song down to a crawl for a short period of time, making it easier to perfect complicated patterns of notes; flow causes your ship to fly into the air, clearing all highways and giving points every second according to your multiplier; and cleanse allows you to just blow up a large portion of a highway for points. Some are more useful than others, but overall the power-ups add a nice extra layer of strategy for those seeking to maximize their score.

Amplitude’s song list is likely going to be an area of contention due to half of its soundtrack being created by Harmonix themselves, rather than featuring licensed songs from established groups and artists. The 15 songs that Harmonix created make up the game’s story mode, and are described as a concept album that detail the story of a comatose patient undergoing an experimental treatment that involves your Nano Blaster moving through her neural pathways in order to awaken her… Or something like that…

Anyway, the songs themselves are all right, with a few standouts here and there, but the best songs on the tracklist come from some special guest artists like Michiru Yamane of Skullgirls fame; Freezepop, who are basically a staple of Harmonix games at this point; and one of my personal favorite indie game composers, Danny Baranowski, with the song from World 1-2 of Crypt of the Necrodancer.

All in all, there are a total of 30 songs in Amplitude, which seems about right for a game priced at $20, although many of them are locked behind annoying and arbitrary requirements that feel like desperate attempts to pad the game’s length. Some songs require you to perform exceptionally well on the songs in the campaign in order to unlock them, but the problem is that there’s no way to replay campaign songs other than restarting the whole campaign from the beginning. So if you find yourself on the last set of four songs and didn’t score well enough to unlock the 15th song, you’ll have to play the campaign all over again from the beginning.

Local multiplayer returns for up to four players, offering both cooperative and competitive modes, with the competitive modes including a few exclusive power-ups that give players the opportunity to mess with their opponents.

Amplitude‘s Kickstarter ended with Harmonix garnering $844,127 to develop the game, which by video game standards is not a whole lot of money. While the game’s meager budget shows through in the game’s tracklist, the core of the gameplay is strong enough to still make Amplitude a solid follow up to a true rhythm gaming classic.

Bottom Line: While some more star power in the soundtrack would have went a long way, and the way Harmonix artificially pads the game’s length with its song unlock requirements is ridiculous, Amplitude remains an exciting blend of rhythm action and electronica that does well by its predecessors.

Recommendation: How much you enjoy Amplitude will really depend on two things: How much you like electronica music and how big of a fan are you of rhythm action games. If you’re a fan of even one of those things, there’s a good chance Amplitude will be right up your alley. Otherwise, your $20 is better spent elsewhere.