In my review of Crysis 2 I mentioned that I managed to skip past most of the final battles by using the cloak, but some people complained. I should not have used it, they said. I should have given the aliens a sporting chance, they said. I was just cheating myself out of gameplay, they said. It’s a flawed argument. The cloak isn’t a cheat, it’s one of the central game mechanics, and you might as well argue that you’re cheating yourself out of gameplay by not holding the controller upside-down or sticking a bucket over your head. But I can see the point.

Fact is: I like using the cloak because I like being cloaked. In the eternal drunk 3am question of “what superpowers would you want if you had the choice”, I’ve always known I’d go for invisibility. Perhaps that says something about my personality. It’s probably related to my fondness for stealth games. Previously I’ve explained that I like stealth because it’s a far more interesting and skillful alternative to spunking bullets all over the room, but I think part of it is the slightly voyeuristic thrill. There’s something I find slightly creepily enjoyable about being able to see and overhear people who don’t know I’m there, in real life and in games. In games like Thief 2 and No One Lives Forever you’ll find some of the best writing in the game if you go unnoticed by guards long enough to hear their conversations.

So I got a lot of use out of the cloak in Crysis 2, generally using it to run behind enemies and give them a wedgie before they could react, but of course the cloak drains your suit energy. And that was one of my complaints about the game’s design, that all your powers take from the same energy source, which rather hamstrung one’s ability to switch from a situation where you’d need one power to a situation where you’d need another. It made me think about invisibility as a gameplay mechanic, and inspired this, another devotion of Extra Punctuation to one of my hypothetical and never-to-be-actually-made AAA game concepts. The question: could you make a game in which the protagonist is a permanently invisible man?

You could argue that this is already the case in many first-person shooters. In Half-Life 2 you look down and see nothing. Objects you hold in front of you appear to be floating unsupported and when you press “use” on door handles and buttons they appear to activate with no intervention from a visible limb. It’s apparently only by some universal visual quirk that other characters can see you. Unless it’s only your arms and legs that are invisible, like that one character in Venture Brothers.

But shut up, smartarse. A game about an invisible operative would certainly have much less emphasis on combat, which means the core mechanics would need to be shifted towards a failure state other than “get shot and killed.” Instead, your central objective in each mission would be to not let the enemy realize you’ve been there at all. This is something a lot of stealth games tend to overlook – sure, if you silently knock out all the guards on your way to the classified documents then no one’s setting off any alarms that night, but next morning when everyone’s comparing head lumps and the safe door is hanging open it’s going to be fairly obvious what’s been going down. I would think one of the first things they teach you at intelligence warfare school is that a piece of enemy intelligence is only useful as long as the enemy doesn’t realize that it’s been compromised, because they’ll just change their plans, go dark, deny everything. The only example I can think of where this is considered is in a mission in Thief 2 where you’ve been hired to frame someone, and you’re not allowed to knock anyone out because any evidence of your presence creates reasonable doubt. 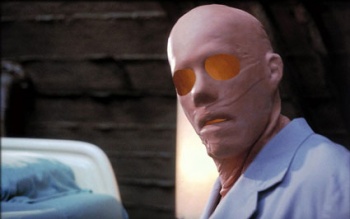 Similarly, the usefulness of an invisible agent hinges on no potential enemy knowing that an invisible agent exists, because they’ll start retraining their guards and investing in thermal goggles. So here’s the scenario. The player is a disgraced soldier who volunteered for the weapons research division of an ethically dubious PMC (pardon the tautology there). He is turned permanently invisible by an extremely small division within the company that’s almost universally unheard of and staffed by as small a number of individuals as possible to preserve secrecy. Your services are offered to the PMC’s clients as undercover work with no detail given besides a guarantee of success.

It’d be mission-based and each mission would hinge on you not letting bystanders realize there’s someone in the room with them. Maybe each location has a “suspicion” meter, which goes up when you draw significant attention to yourself. So you can’t touch anyone or let them see you pawing through documents or carrying keycards, but even just sneaking up behind people is harder than it sounds. I don’t know if you’ve ever tried to move around unnoticed in a small, silent room containing another person that you intend to murder – I mean, give a hilarious surprise to – but it’s a lot harder than you think and there are far more factors than simply visual ones. Have you ever tried going up or down a flight of stairs completely silently? Even if you did manage it, being silent still gives people this weird sense that someone close by is trying to be conspicuously silent. Your best bet would be to distract individuals with manufactured background noise and thrown objects while chucking significant objects out windows and down garbage chutes to be collected later before anyone can see you carting them about.

There could even be a mechanic where you reduce the mission’s suspicion level by making characters believe that suspicious characters are going mad. In fact, the first mission would probably just be a tutorial in this, in which you discredit the claims of some mouthy official by visiting him when he’s alone at home and throwing his ornaments around. If only one NPC sees you open a door or knock a cup off a desk then they’d set off an alert and other people would take a look around for them, but once the alert stands down if you kept doing it then security would get more and more impatient with the guy until you can start juggling plates right in front of them and no-one cares, because of the “boy who cried wolf” factor. But be careful! If just one other NPC sees your antics at the same time as your target, then your target will suddenly regain their credibility and undo all your hard work. Still, no reason two people can’t go doo-lally on the same shift, right?

What I think would make this game interesting is that the player would have to learn a whole new set of rules. You’d be immediately noticed if you ventured into water, and tracking through a dirty environment might leave you with compromising stains, or make you leave noticeable footprints. You’d have to have your wits about you at all times in case a crowd of gossiping scientists are bearing down the hallway towards you and you can’t just knock guards out willy-nilly unless you can make it look like a particularly violent spasm.

I can think of at least one reason why publishers wouldn’t go for this, though: because the main character is invisible, you can’t include a five-cent action figure of him with the “special edition” and charge an extra thirty bucks for it. Or perhaps you could. Just throw in an empty plinth and hope it wins points with the irony crowd.