Part 2 of our gallery features a lot of star wars, a lot of super heroes, some anime, but most importantly, WESTERN THEMED MARVEL!

Welcome back, O Readers, to our chronicle of the often mind-blowing cosplay seen over the weekend at the 5th annual Chicago Comic & Entertainment Expo, AKA C2E2, held this weekend in Chicago.

As with our first installment, there is some next level stuff happening here. I don’t want to spoil it, but OK, I’ll spoil it: there are Old West versions of SHIELD agents contained herein.

All photos taken for The Escapist by Garret R. Brown. 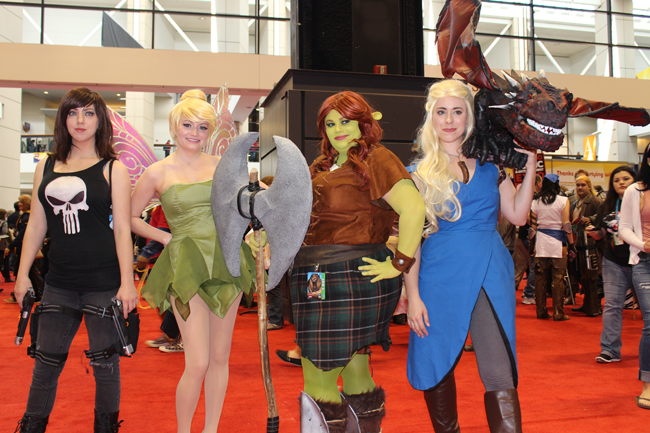 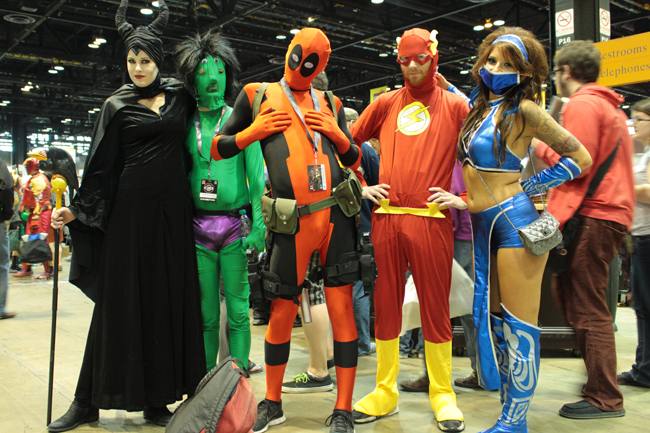 Here’s Maleficent, Deadpool, The Flash, Kitana and a costume I don’t recognize but about which I’m certain our lovely commenters will have a fine time politely educating me. 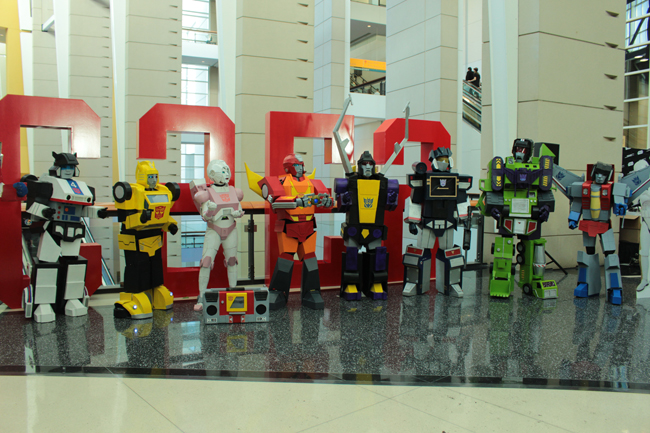 Truefact: I spent most of 4th grade trying, and failing, to figure out how to make the “ch-ch-ch-ch-cheough” transforming noise with my mouth. Also, the Blaster boom box was created by Spicy Panda Creations. 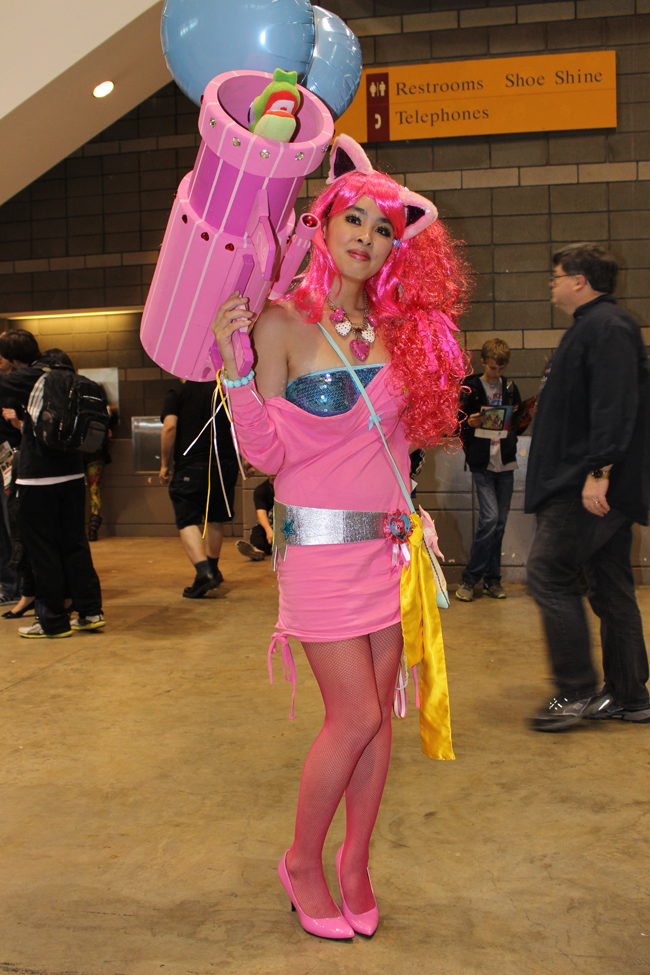 Commenters: I don’t know what this is. But I do know that I like it. 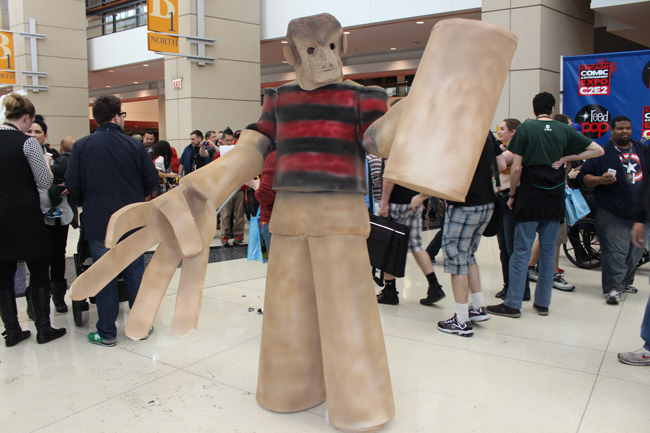 The Sandman, who will bring back horizontal stripes if he has to rob every bank in New York City to do it. 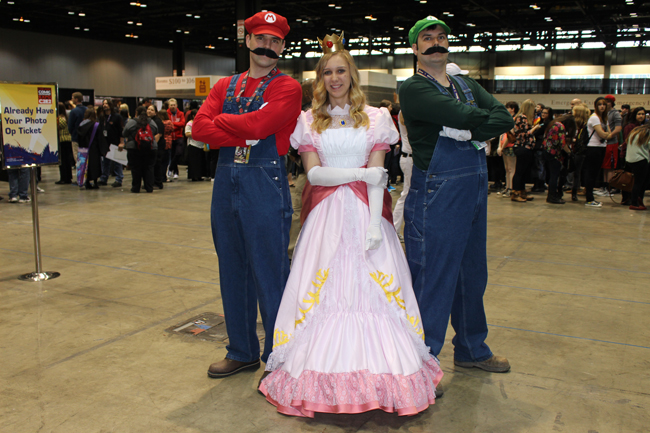 Mario, Princess Peach and Luigi are enjoying a lovely day in the Windy City, unaware that moments from when this photo was taken, Bowser would ruin it all by kidnapping the lot of them and taking them to his secret lair somewhere in Iowa. 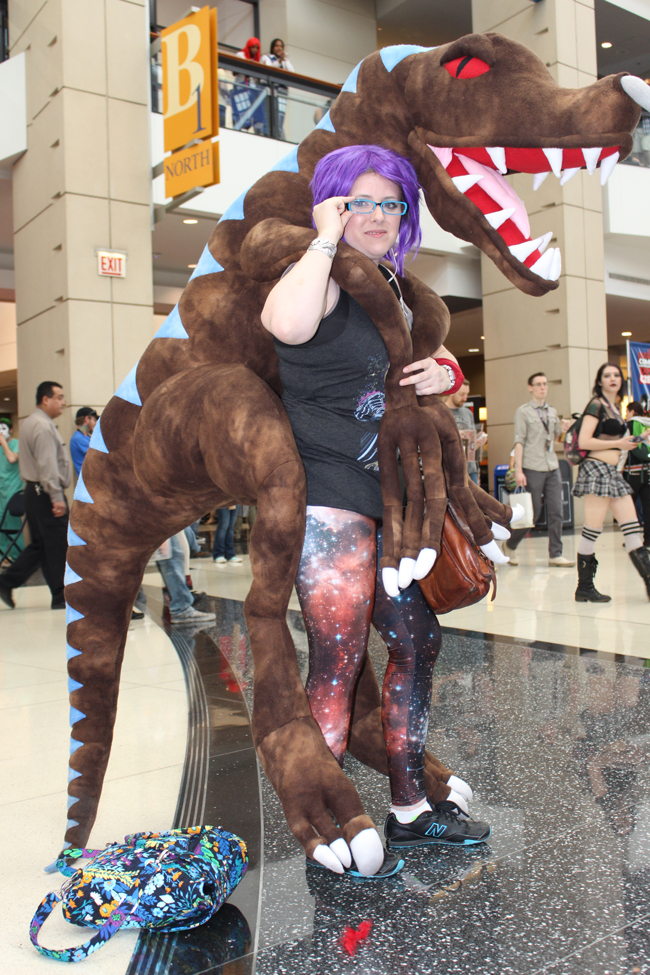 This Gert and Old Lace costume by Nite Owl Cosplay makes me wish we really could keep dinosaurs as pets. Besides birds of course. In other news, how cool is it that birds are dinosaurs? 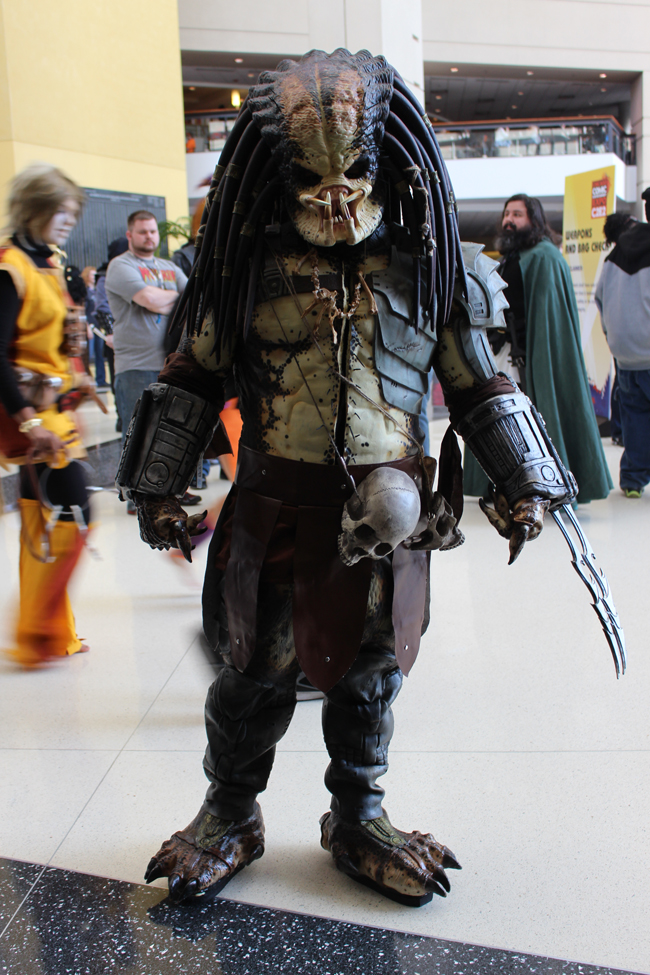 What are you waiting for? KEEL ME KEEL ME NAOWWWW! 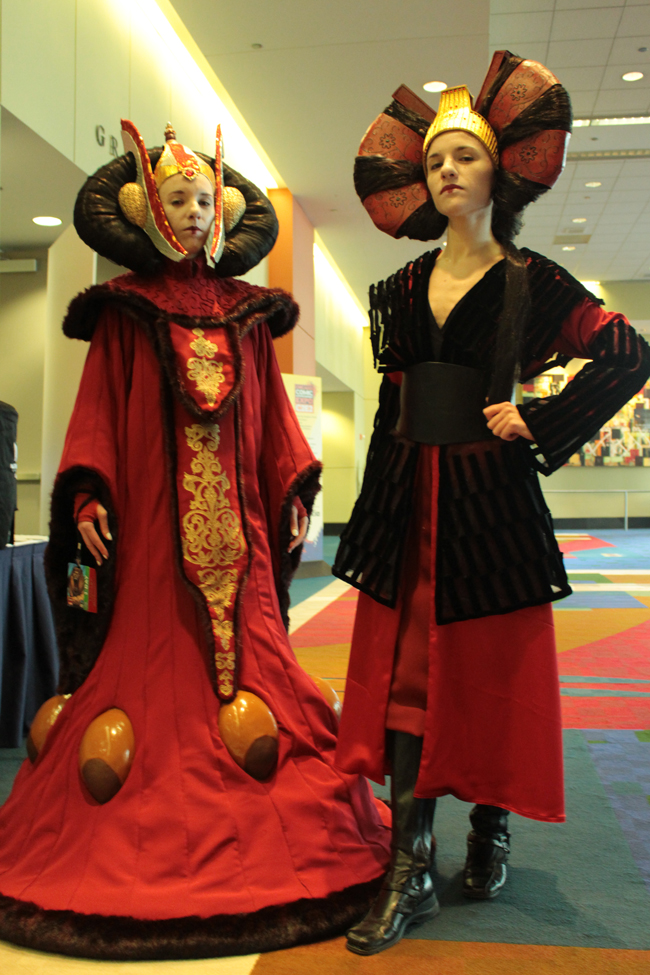 Naboo citizens Lisa Hale as Amidala and Jenny Hale as her decoy in their Sunday best. 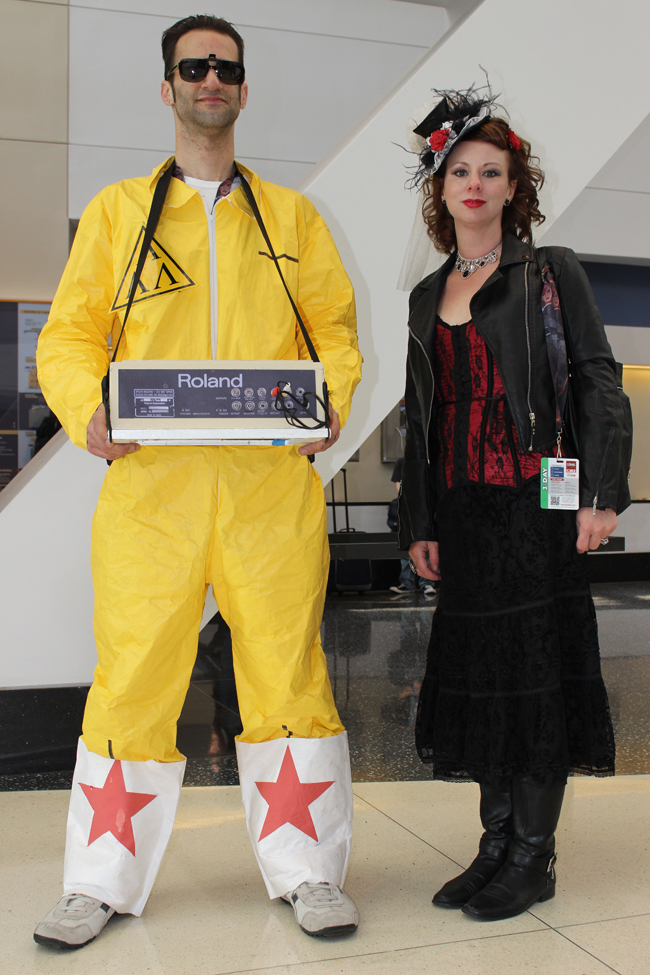 Here’s Timmy Alioto as Gilbert from Revenge of the Nerds. Unfortunately, I don’t recognize his companion’s costume, but I’m certain commenters will enjoy schooling me. 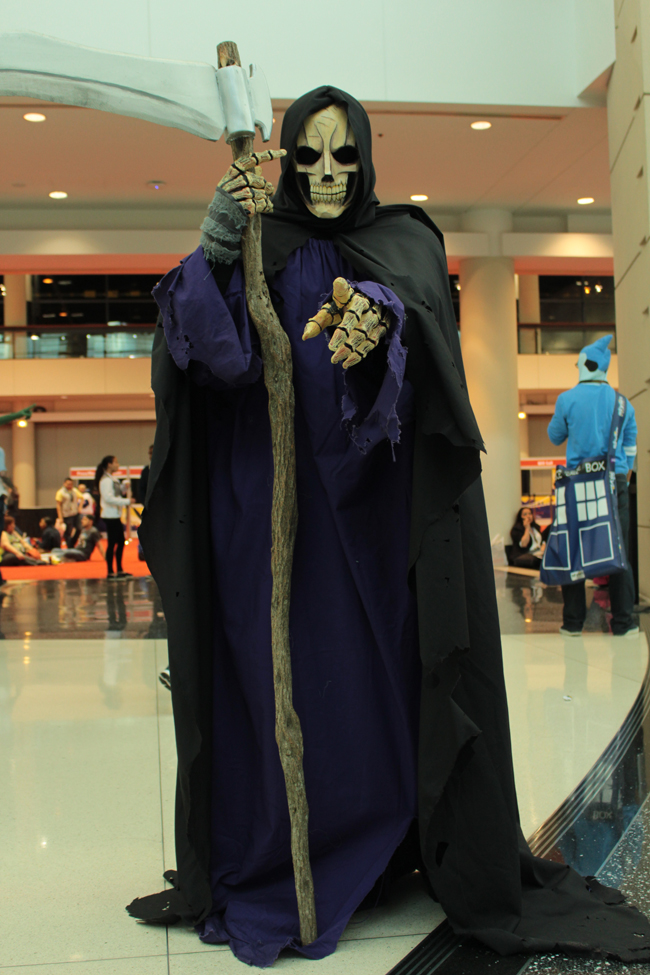 I love this Death costume by LordJazor, especially because it reminds me of Frank Langella’s Skeletor get up from the Dolph Lundgren Masters of the Universe. 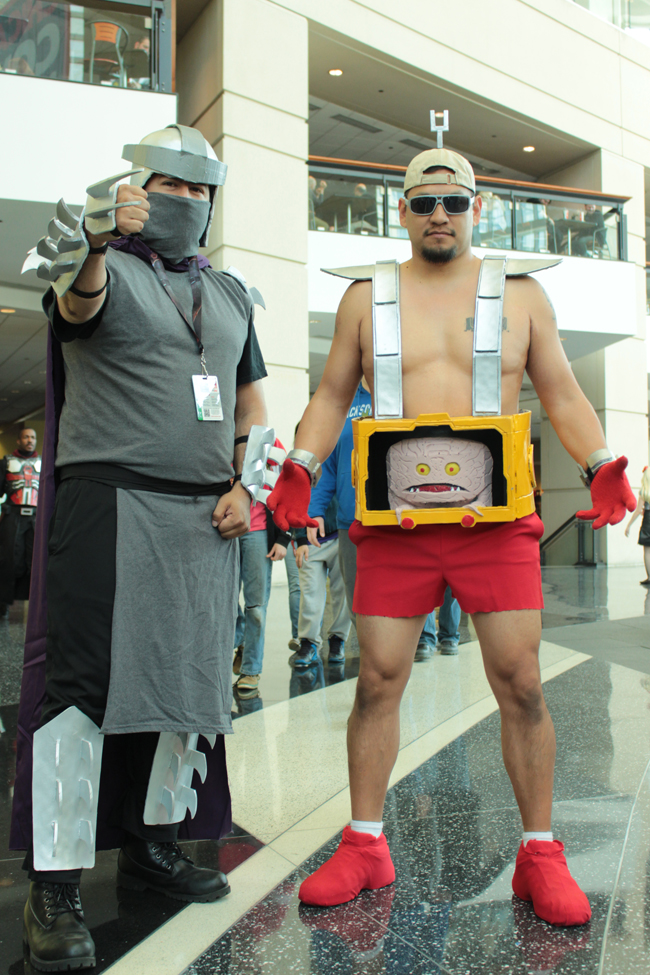 Shredder and Krang need to make it clear that their costumes are guaranteed to be far better and far cooler than the creepy nose Michael Bay version of TMNT. 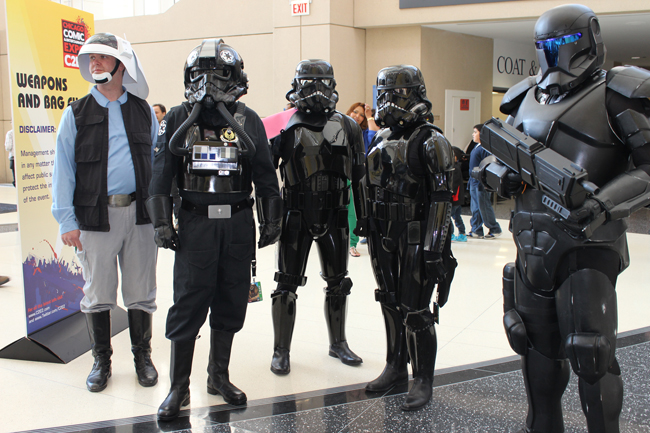 This is the Star Wars universe equivalent of several Gulf-War era Marines posing for a photo with a time-travelling Doughboy. 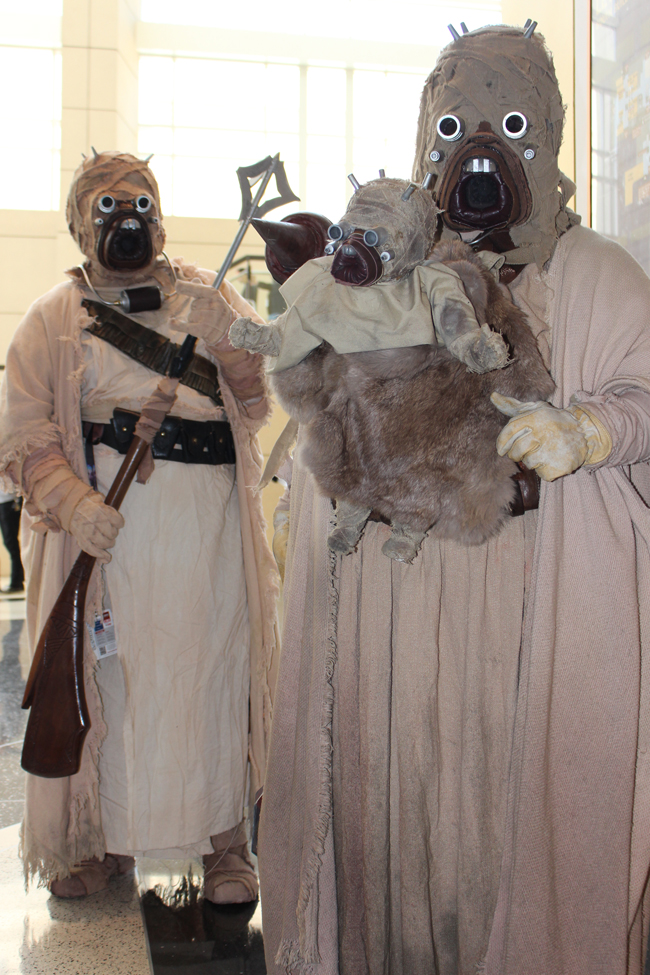 Looks like this family’s baby is all Tusken’d out. Get it? GET IT? #Comedygenius. 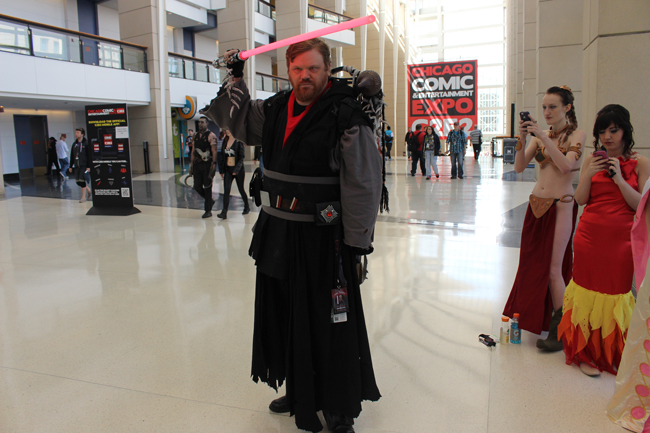 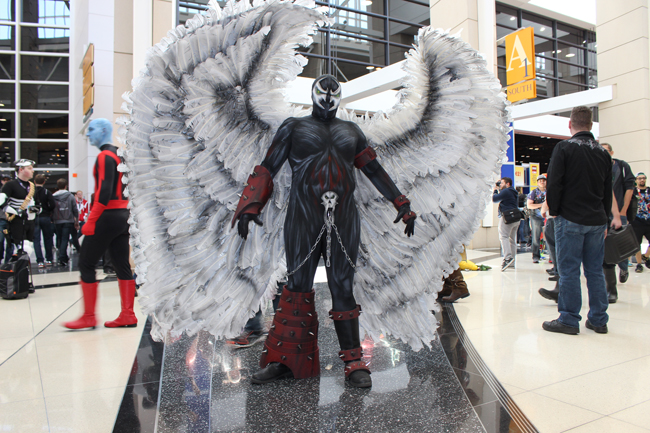 It’s weird how it’s impossible for Spawn cosplay not to look exactly like Todd Mcfarlane’s toys come to life. 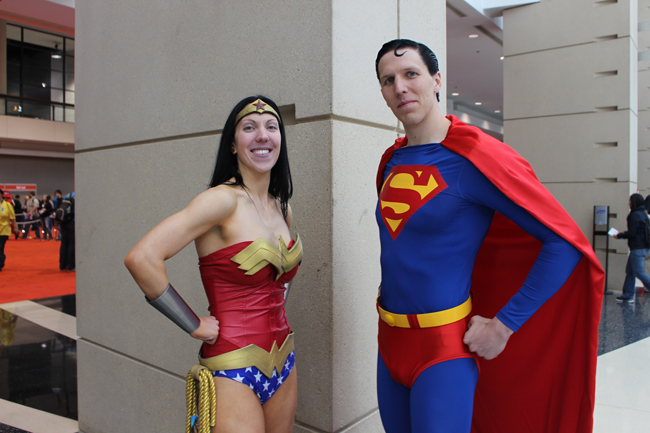 Tegan and Adam Schultz as Superman and Wonder Woman, who remind us that there’s no good reason why WB can’t make a good Wonder Woman movie. Get on that please. 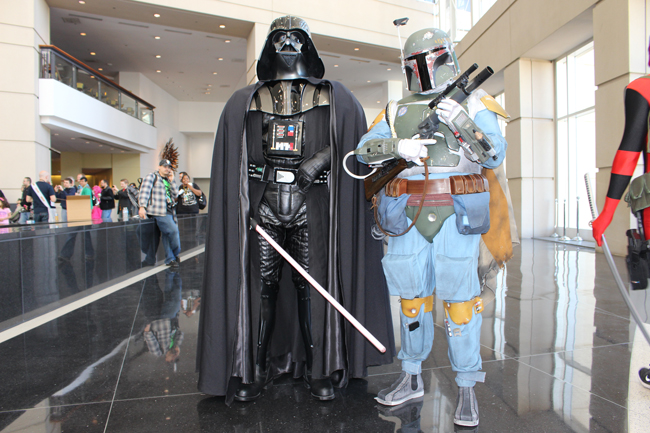 “I want him alive, no disintegrations!” “HUFF fine, but first let’s take a picture just in case something happens to me after I get to Jabba’s palace.” 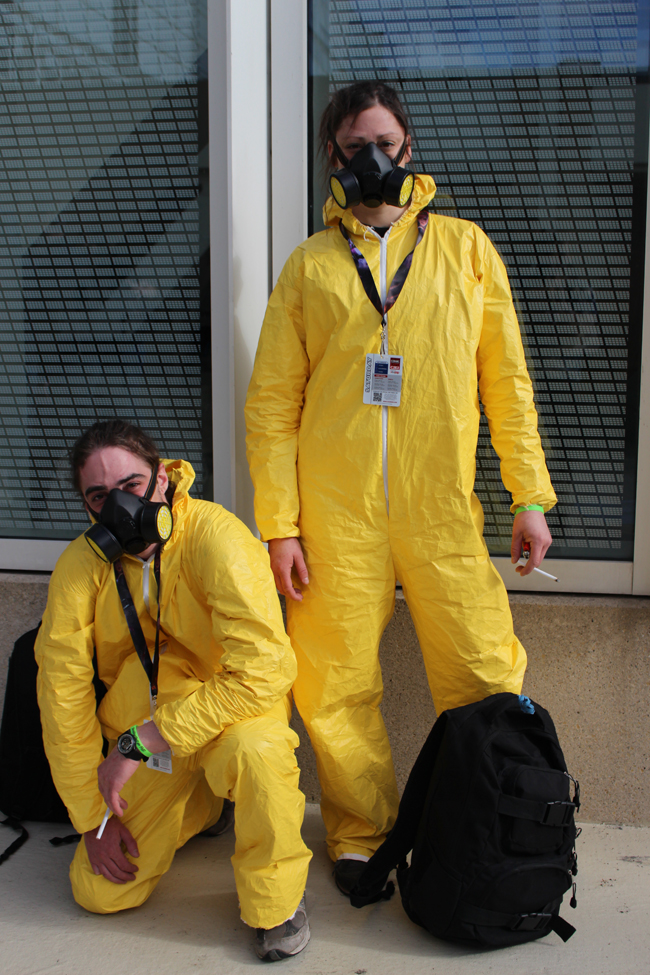 I hope hope hope that these two form a cosplay duo called “The Science Bitches”. 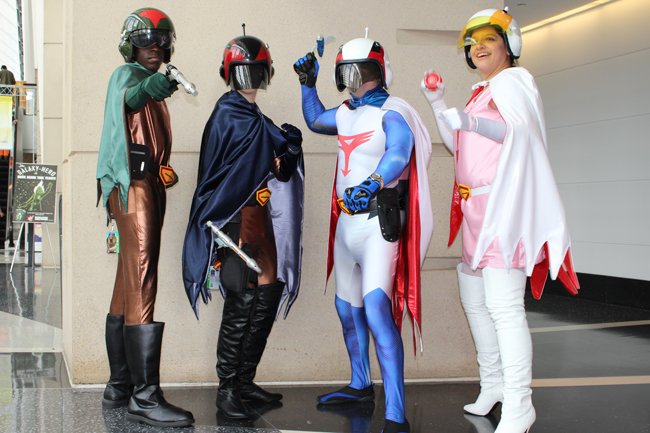 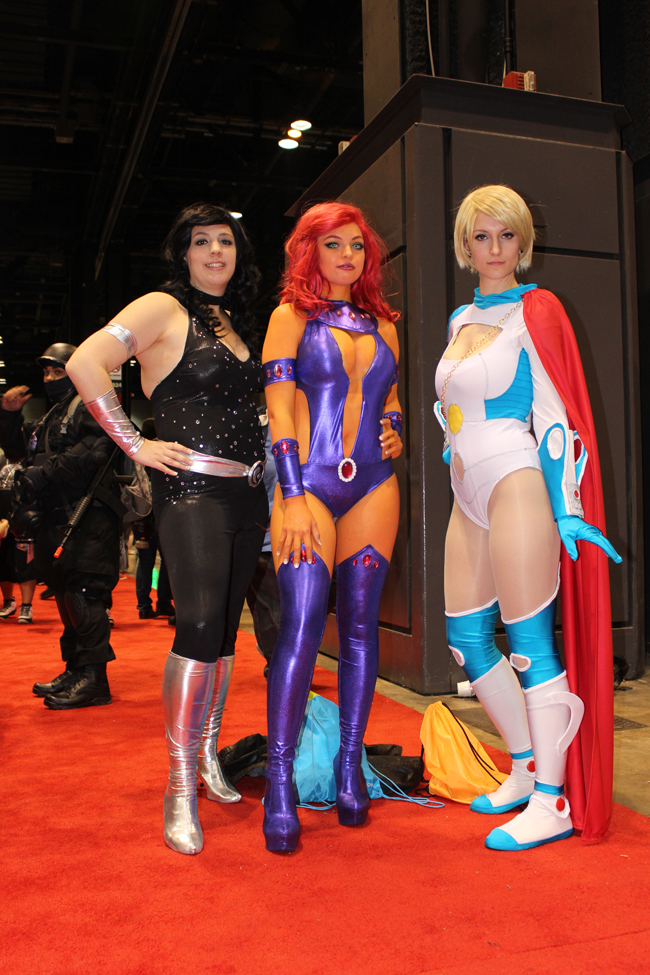 Ally as Starfire, Janessa Ame-Comi Powergirl, and Alaine as Donna Troy intimidate me with their furious looks of authority and superior costume skills. 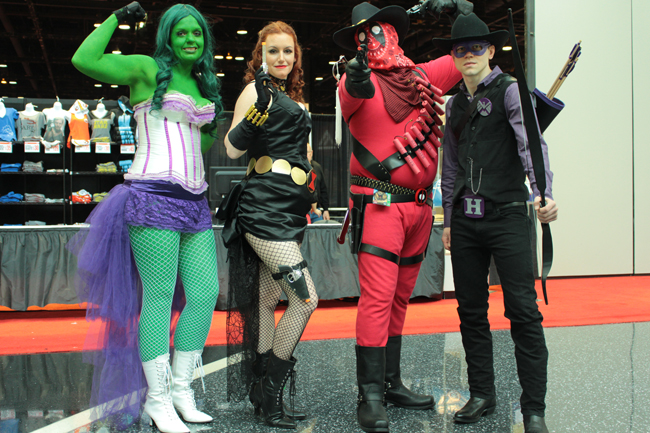 EVERYBODY. What you are looking at is, because reasons, Western versions of She-Hulk, Black Widow, Deadpool and Hawkeye. AKA The Greatest and Best Idea Ever. 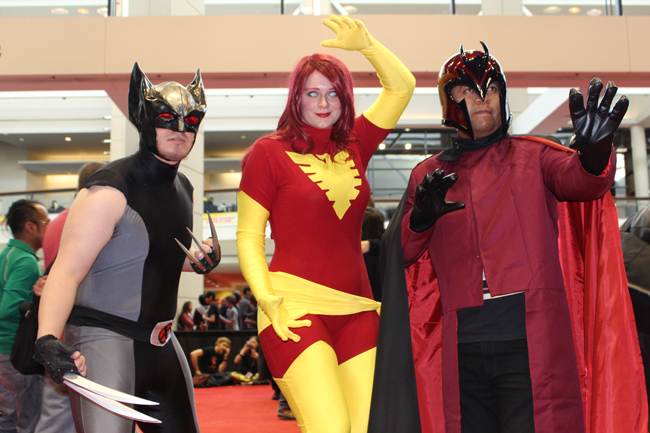 These mutants momentarily stop their neverending struggle to enjoy a day of comics and cosplay. The only snk snk you’ll hear is the sound of their credit cards swiping when they pay for back issues of X-Factor. 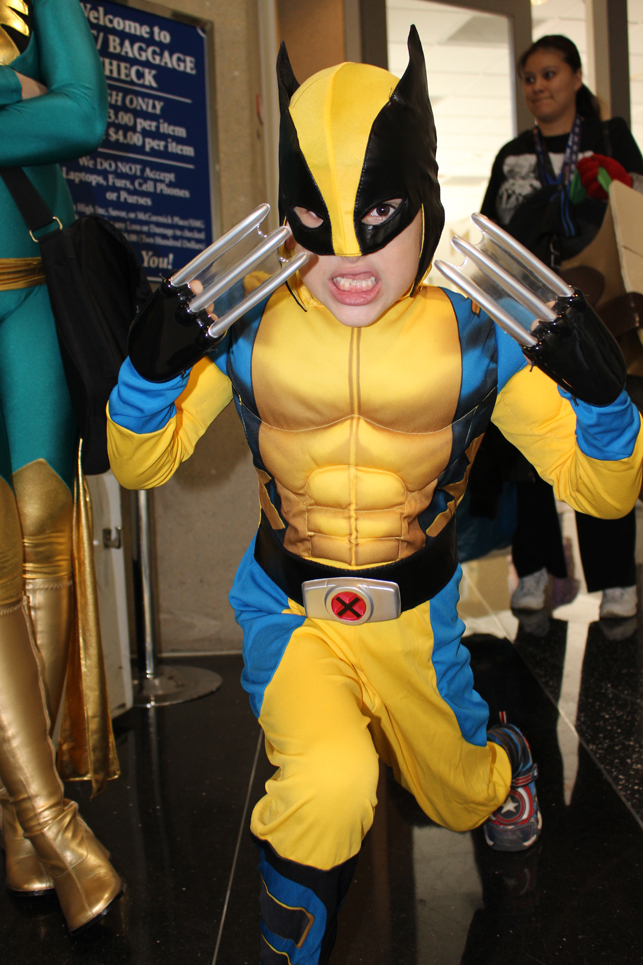 I think we can all agree that this kid’s Wolverine costume is awesomeness incarnate. 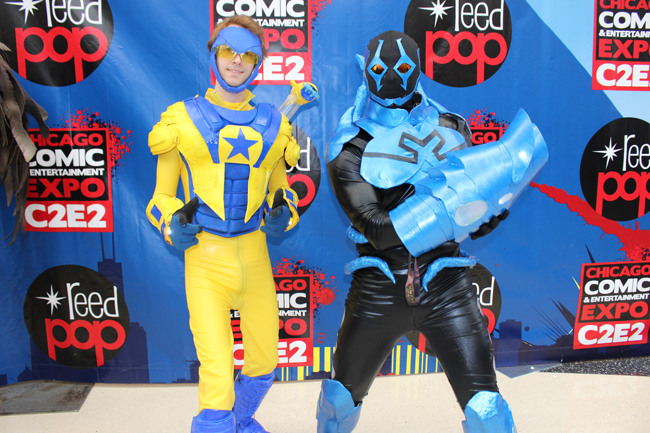 Once again, I invite our lovely, handsome and/or beautiful, and intelligent commenters to tell me what these costumes are. 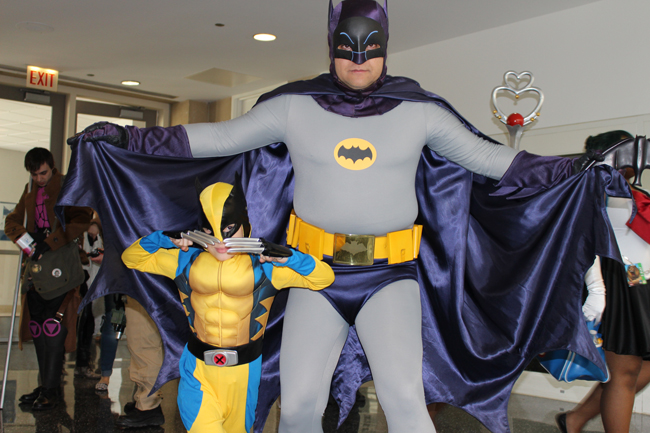 Finally, here’s Kid Wolverine again, posing with what has to be the most accurate Adam West Batman ever conceived ever.