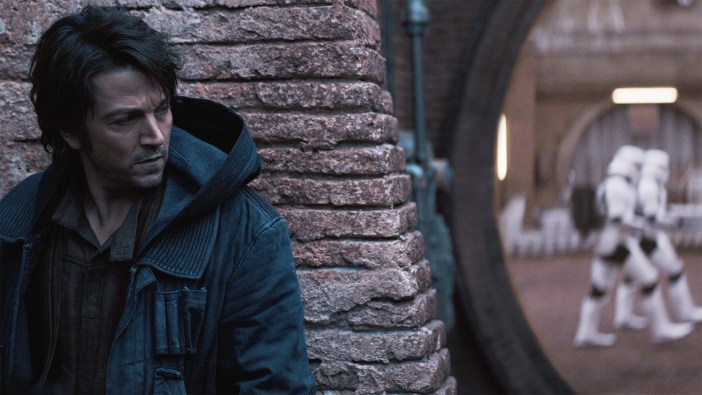 This discussion and review contains spoilers for Andor episode 7, “Announcement.”

Part of what helps Andor stand out from so much modern franchise media is the care that it takes in building its central metaphors, underscoring its themes and ideas through clever visual storytelling.

“Everything says something, Syril,” Eedy Karn (Kathryn Hunter) advises her son (Kyle Soller) in the opening scene of “Announcement.” She continues, “I’ve tried to make you understand that, but you’ve resisted.” Andor is a show that is consciously and deliberately aware of that. One of the smarter and smaller details in “The Eye” was the scene of Commandant Jayhold Beehaz (Stanley Townsend) struggling to fit into his belt as he prepared to impress Colonel Petigar (Richard Katz).

Beehaz complains the belt must have been improperly stored and has compressed. His wife, Roboda (Michelle Duncan), counters that he has “expanded.” It is a minor aside in the episode, but a very telling one. It’s a direct callback to a conversation between Cassian Andor (Diego Luna) and Luthen Rael (Stellan Skarsgård) in “Reckoning,” in which Andor remarked that the Empire had grown “so fat and satisfied” that it couldn’t imagine anyone could “get inside their house.”

“Announcement” has a similar recurring metaphor. Early in the episode, following news of the raid on Aldhani, Mon Mothma (Genevieve O’Reilly) confronts Luthen about his provocation of the Empire. Luthen justifies the necessity of accelerating the Empire’s brutality to force a reaction. “The Empire has been choking us so slowly, we’re starting not to notice,” he explains. “The time has come to force their hand.” This is an image to which “Announcement” returns repeatedly.

The Empire’s weapon of choice is one of suffocation, both literal and metaphorical. It isn’t just the rebels who acknowledge this. Addressing the Imperial Security Bureau, Colonel Yularen (Malcolm Sinclair) boasts to the assembled officers that “the only question (they) need to answer is how tight to close (their) fist” to squeeze the insurgency. “Announcement” is an episode about the Empire tightening its grip around the throats of its subjects.

Andor has stressed that the Empire’s preferred method of execution is hanging. Upon discovering that Lieutenant Gorn (Sule Rimi) was a traitor in “The Eye,” Beehaz sternly warned that his subordinate would hang for his crimes. When Andor returns to Ferrix in “Announcement,” his adoptive mother Meerva (Fiona Shaw) recalls how the Empire hanged her husband Clem (Gary Beadle) for simply being in the wrong place at the wrong time, his body displayed as a macabre warning.

Late in “Announcement,” Andor flees Ferrix and tries to start a new life on Niamos. However, he cannot escape the Empire’s grip, in a literal sense. Like Clem, Andor ends up in the wrong place at the wrong time. On a trip to the shops, he is stopped by an Imperial shoretrooper for being “a part of it,” without ever explaining what exactly “it” is. The shoretrooper summons a KX Unit (Aidan Cook) to “hang on to this one.” The KX-Unit reduces the command to a simple imperative: “Hang.”

If “The Eye” was built both narratively and thematically around Nemik’s (Alex Lawther) simple instruction to “climb,” then “Announcement” is similarly structured around the KX Unit’s order to “hang.” As the droid grabs him by the neck and lifts him off the ground, Andor struggles. “No, you misunderstand,” Andor protests. Even running from the rebellion, Andor can feel the grip of the Empire tightening around his throat.

It’s an evocative image for a number of reasons. Most obviously, it all hearkens back to the first character-defining moment for Darth Vader (David Prowse and James Earl Jones) in Star Wars, whose powers extended to choking the life out of those who dared stand up to him. More recently, the idea of suffocation has become synonymous with the use of excessive force by law enforcement officials and the civic protests that inevitably rise up in response to that. “Announcement” extends the metaphor further. This suffocation is not just literal. It is also reflected in smaller ways. At the start of the episode, Eedy chides Syril for having the collar on his brown suit “raised,” as if to protect his neck. Eedy interprets the raised collar as proof that her son doesn’t believe in himself and is “desperate for approval.” Later on, Supervisor Dedra Meero (Denise Gough) chides Attendant Felzonis (Ragevan Vasan) for not having his tunic done up to his collar.

The large ensemble in Andor allows the show’s themes to ripple across various perspectives and positions, as if to underscore “as above, so below.” Indeed, “Announcement” neatly parallels Cassian Andor and Syril Karn. Eedy talks about how her son has “resisted” the lessons she tried to impart, much like the Empire sees its subjects. The end of the episode juxtaposes Cassian’s prison sentence with Syril’s depressing new status as a “lifetime employee” at the Bureau of Standards.

“Announcement” feels like a standalone episode. To this point, Andor has effectively structured its six episodes into two arcs of three episodes each. Star Wars does like its trilogies, after all. The writing and directing credits on the remaining five episodes suggest that the rest of the season will comprise two other multi-episode arcs. In contrast, “Announcement” is the only episode of the season written by one-time Andor showrunner Stephen Schiff, suggesting it is a self-contained story.

“Announcement” is effectively about the response to the events of the previous three episodes, the fallout from the raid on the Imperial Garrison. More specifically, it is an episode about the Imperial response to that. Every action has a reaction, and “Announcement” suggests that some of these responses are disproportionate. It’s an interesting structural choice in the season, one that underscores the magnitude of what has happened while also interrogating the reaction in isolation. The daring robbery in “The Eye” was a bold statement from the nascent resistance movement, a way to force the galaxy to stand up and take notice. However, “Announcement” underscores the extent to which the Empire’s counter-action is just as important to the development of any true insurgency. “We need it,” Luthen advises Mon Mothma. “We need the fear. We need them to overreact.” Mothma is horrified, “People will suffer.” Luthen replies, “That’s the plan.”

Revolution is a messy and bloody business. It is hard to keep one’s hands clean. Rogue One explored the extremes to which the Rebel Alliance had to go in order to strike at its oppressor, perhaps resonating with an American culture that had a deeper understanding of the moral compromises involved in an anti-imperial insurgency. In “Announcement,” Kieya Marki (Elizabeth Dulau) instructs Vel Sartha (Faye Marsay) to find and kill Cassian. “This is what revolution looks like, Vel,” she states.

Historically, many revolutionary movements are galvanized by the overreaction of imperial powers to high-profile gestures of defiance. In Ireland, the public had little sympathy for the rebels who staged the failed Easter Rising, until the British turned the executions of those involved into a grotesque public spectacle that stirred the Irish independence movement. John Adams argued the “foundation of American independence was laid” with British soldiers massacring civilians in Boston.

“Announcement” underscores the idea that there is no evading the Empire’s reach. “We’re both a long way from where we started,” Tay Kolma (Ben Miles) tells Mon Mothma, reaffirming that she is another of the show’s immigrants like Cassian. “I just can’t imagine living here, Mon, like this. Coruscant. No escape.” When Cassian returns to take Meerva away from Ferrix, he points to the Empire’s presence. “You want to live under that?” he asks. She replies, “It’s happening everywhere.”

The Empire’s reach is constantly expanding and not just in terms of its geographical boundaries. The attack on Aldhani is used to justify massive extensions of authorities’ power of “surveillance, search, and seizure.” However, Andor is cynical enough to understand that such expansion is not necessarily patriotic. It is not for the greater good. It may not even be for the security of the Empire itself. Instead, it is an opportunity for careerists to extend their own influence.

Meero uses “the Imperial Emergency Act in the wake of Aldhani” as a way to undermine her professional rival Lieutenant Supervisor Blevin (Ben Bailey Smith), who had previously used the disastrous intervention on Ferrix to extend his own sphere of influence. This act of defiance is just an excuse for a power grab. Even within the Imperial hierarchy, it solidifies the position of the Imperial Security Bureau, placing any “army or naval resources” at the disposal of these pencil pushers.

Watching Andor over the past few weeks, it has become clear that the show understands both imperialism and insurgency. In “Announcement,” Andor explores the relationship between the two. While Meero argues that the Aldhani robbery was “an announcement” on behalf of the emerging resistance movement, “Announcement” suggests that the Empire’s response is just as much a statement and will likely be even more important in defining that rebellion.

As the Empire expands its reach and tightens its grip, maybe its subjects will finally realize that they’re being choked.