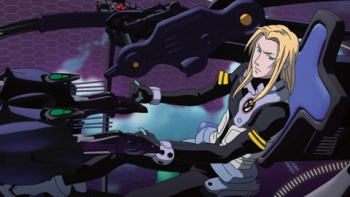 My initial thought was that Aquarion would prove a classic example of “so bad, it’s good”. However, in the end – much to my surprise – I realized it might not have been so bad after all. Aquarion takes the more prominent clichés of mecha anime to a whole new level; senseless shouting of the name “Aquarion”, over-the-top CG effects, and a mechanical extendo-punch to the moon. Whether it’s intentional or not, Aquarion is practically a parody of all things mecha, which really helps ease one through some of the more trying times in the series.

The events of Aquarion take place 11 years after the Great Catastrophe, which wiped out a large portion of the earth’s population. Since then, beings known as Shadow Angels awoke from their 12,000 year slumber to harvest humans for their prana (living energy). Of course, being Angels with superpowers isn’t enough; they need to wreak havoc upon the world using bio-mechas, called Cherubim Soldiers. Now it goes without saying: The only way to combat a giant robot is with another giant robot, which brings us to Aquarion. Aquarion is a mechanical guardian formed by the merging of three airships, known as vectors, and the souls of the pilots, dubbed element users.

The plot is frighteningly unoriginal, and feels a bit all too familiar. At first glimpse, the same could be said for the characters: the feral boy who is our “unlikely” hero, the young princess who is at first repulsed by his savagery, her well-learned brother, the brash jock, the list goes on. While some of the characters do strictly adhere to the standard, others end up deviating significantly.

The surreal fantasy-styled world of the Shadow Angels, Atlandia, proves a nice departure from the traditional post-apocalyptic earth of our heroes. Unfortunately, Shadow Angels themselves lack the depth that their great designs seem to merit. We are left to ponder what the Shadow Angels do besides stand upside-down on ceilings, sniff flowers, and cry.

By far the largest problem Aquarion faces is development in terms of both plot and characters. The series works on a ‘problem of the week’ format; said problem, of course, is solved in a mecha battle at the end of each episode. While it admittedly makes sense in Aquarion, this sort of pacing hinders advancement in the story – it doesn’t get a move on until the last 6 episodes.

Nor does the cast fare much better. Face time is pretty evenly split between characters, which proves a double-edged sword. While it makes the supporting cast more interesting, it also makes everyone feel incomplete. While there is subtle development between characters, overall their relationships seem unchanging; just when you think they are going somewhere, the episode ends and all progress becomes a fleeting memory. It’s a shame that so many of the relationships and romances had a great start that just never entirely came to fruition.

There is a time in storytelling when certain matters are better left unexplained, be it to build a shroud of mystery or to pose philosophical questions. Aquarion, on the other hand, seems to have a case of amnesia. Far too much is left unaddressed. The pasts of several major characters come into question yet ultimately are overlooked. We’re never clued in on what exactly an “element user” is. It could be assumed that they are individuals with a connection to events that transpired between humans and Shadow Angels 12,000 years ago. Exploring these ties to the past would have been invaluable, as many of the characters felt irrelevant to the overarching story.

It may be possible that the explanations I desired were there, just buried under 10 tons of religious symbolism which feels aggressively forced in. The plot becomes unnecessarily difficult to follow at times, because of this overabundance of religious rhetoric.

Aquarion‘s presentation as a whole is solid, and the 2D animation is quite good. The 3D integration ranges from poor to incredibly well-done, though the excess of computer-generated effects detracts from this. I highly recommend the subs over the dubbed audio (if you do watch the dubs make sure to have sub-titles on). The voice acting is fine, in fact, I prefer some of English voices over the Japanese. However, the significance behind certain aspects of the series becomes lost in translation. Moreover, much of the romance and the more heartfelt lines are downplayed, if not entirely passed over, by the dubbed audio. This happens to the extent that my opinion actually did a 180 after watching a second time with the Japanese audio/subs.

Bottom Line: Aquarion isn’t exactly a masterpiece, though its unintended comedic value makes the series quite entertaining. It isn’t the sort of anime that you find yourself uncontrollably watching episode after episode until your eyes bleed, however, don’t be surprised if in the end you find you actually liked it more than you had initially thought.

Recommendation: There is plenty of worse anime out there, and Aquarion is good for a few laughs if nothing else. Just don’t expect too much and you should enjoy it.

Salvan Bonaminio really wanted to work in a joke about how every time the vectors merged to form Aquarion the pilots had an orgasmic sensation, but he just couldn’t fit one in.