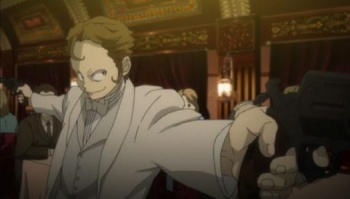 A good smoothie blends fruits, juice, frozen treats, and the occasional nutritional supplement into a satisfying flavorful drink. Just like a good smoothie, a good anime series like Baccano! combines various characters, excellent storytelling, character interactions, and occasional genre changing into a show that makes full use of all of its assets.

The primary characters of Baccano! include a pair of dimwitted thieves, several rival mafia families, sadistic murderers, a smalltime gang led by a crybaby, a couple of daughters absurdly devoted to their respective fathers, a paranoid child, estranged siblings, and even an immortal alchemist. They each have their own personalities that shape how they deal with trouble: Some are cool and collected, some react out of emotion, some take pleasure out of the trouble they create, and some are blissfully unaware of the danger around them or the trouble they accidentally cause. Unlike conventional stories, Baccano! lacks an official protagonist. Initially confusing, the lack of a specific protagonist forces the viewer to pay attention to every action as each character comes out of Baccano! with a developed back story and memorable scenes tying themselves to the story.

FUNimation adapted Baccano! well for American release. With the American setting, the Japanese honorifics are dropped and most characters sport their hometown accents in the English dub. Depending on personal preference these accents either fit well with the 1930s setting or are a grating presence. Issac’s and Miria’s dialogue involving Japanese puns is adapted with various degrees of success into verbose English ramblings.

The storytelling of Baccano! makes the series wonderful to watch yet frustrating to summarize. As translated from Italian as “ruckus,” Baccano! is a ruckus of flashbacks taking place between 1930 and 1932 with a detour at 1711. Most of the story revolves around an incident during 1931 aboard the Flying Pussyfoot, a train en route to New York that three groups terrorize for different reasons. While explaining the Flying Pussyfoot incident, a war between rival mafia families pans out while some people get lucky or unlucky enough to receive immortality.

The story is told out of order through the point of view of each main character to focus on his or her interactions throughout the series. The changes between character points of view and time settings maintain the ruckus while holding the viewer’s attention. Scenes will interplay between each other as one scene will reach a cliffhanger, cut to a tangentially relevant scene set during a different time, then resolve the first scene through the eyes of a different character. It takes getting used to, but miraculously blends itself into coherence during the course of the series.

The character interactions justify the lack of a main protagonist since everyone in Baccano! connects with each other so well. Each character action shapes the actions of other characters like a butterfly effect. By not showing the events in order, viewers often first see how a character acts before learning what event and which character made him or her act that way. Most of the fun in the series is watching how seemingly unrelated events snowball into catastrophic situations or seeing how one minor detail turns the tide of a climatic battle.

Baccano! jumps between action, comedy, and romance depending on character interactions. As an action anime, expect to see beautiful fight scenes involving guns, knives, bombs, wrenches, acrobatics, and brutal fist fighting. Fitting the ruckus, the slapstick and comedy of errors are sprinkled throughout the series. Romance becomes a primary theme when some characters meet and fall in love amid the chaos of their situations. Each genre is well played and smoothly changes between scenes.

Baccano! has a couple of chunky bits that do not blend smoothly – namely the first episode and supplemental epilogue episodes. The first episode rushes through character introductions and succeeds too well at establishing how confusing the series will be. It can turn off viewers from watching further episodes. Another minor problem stems after the end of the main series when each character is accounted for and the anime left room for a full second season. Instead, the epilogue episodes only add extraneous exposition to story arcs that did not require any. Minor complaints aside, Baccano! is a wonderful series. There is simply nothing else set or told in the same style and is at least worth watching once for the experience.

Tom Tonthat drank one smoothie before and two smoothies while writing this review. His favorite consists of peaches, mangoes, and frozen yogurt blended in pineapple juice with a dash of honey.