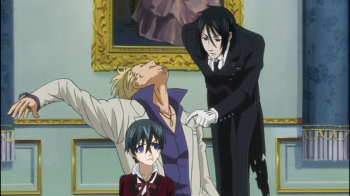 Many years ago, Western audiences were introduced to Sailor Moon, an anime about super-powered magical girls who fought monsters from another universe. Even after heavy editing to remove its twirling skirts, fleeting shots of schoolgirls’ panties, and girl-on-girl relationships that suggested something beyond just friends, Sailor Moon was many people’s first introduction to how anime and manga can be much more sexualized than other “young adult” entertainment. “Sailor suit softcore” has become a cliché of parody. Recently, the sexualization in anime and manga has become a target of censorship by the Japanese government.

On the softer side of things, anime intended for television broadcast, or for export, will be more subtle, emphasizing relationships and romance over crude imagery. Just like how U.S. audiences are infatuated as to whether Twilight‘s Bella will choose Edward or Jacob, Japanese audiences can follow a shojo anime such as Ah! My Goddess, Tenchi Muyo, or Tokyo Mew Mew – all series about supernatural characters involved in complicated romances. Well, complicated love triangles involving boys and girls, lots of talk about feelings and a lot of implicitness and entendre. Oh, and standard heterosexual romance.

Black Butler is not about standard heterosexual romance.

It’s Victorian England, and the masters of the Phantomhive estate have died in a fire. Their surviving son, Ciel, pledges to carry on the family business and their masterful service to Her Majesty by paying the ultimate price – by selling his soul to the devil! Well, not just any devil, but to Sebastian, a masterful servant with supernatural speed, endurance, and skill. Yes, a running joke is that Sebastian is “one hell of a butler.”

Ciel needs the help, too. His country estate is run by a maid whose cracked glasses leave her blind, a quaint American cook who uses flamethrowers instead of an oven, a strangely-accented gardener with super-strength and super klutziness, and a semi-retired majordomo left doddering from advanced age and from injuries suffered in his dark past. It looks like this anime could be a typical situation comedy …

Only there’s little time for wacky hijinks, as the Phantomhive family has sworn to serve Her Majesty the Queen, and they are often sent to investigate crimes that baffle Scotland Yard! With young Ciel’s stubbornness and with Sebastian’s supernatural skill, they have knowledge and insight into the paranormal that give them the edge. So it looks like this anime could be a monster-of-the-week crime drama …

But at its core, Black Butler is what’s called a shotacon anime – a show about relationships involving young boys and older partners. Each episode spends a fair amount of screen time on Ciel and Sebastian’s weird relationship. Sometimes Sebastian comes out on top, as he uses his physical prowess and unflappable demeanor to rescue helpless Ciel from a kidnapping or a fight. Sometimes it’s a switch and it’s Ciel who’s in charge, reminding us who is lord and master as he orders his butler to perform humiliating, repugnant, or demeaning tasks. Lord and butler trade verbal spars, often calling one another dogs; the young master even says “Woof”, more than once. When you get to the episode where young Ciel is fitted into a corset so that he can cross-dress as a little girl, so that he might seduce another lord at least 15 years his senior … yeah, all doubts are off. Black Butler is pure shotacon.

For what it’s worth, it’s very good shotacon, though. The animation is done well, with fair frame rates and rich character design. Sometimes the story moves forward at a nice clip, and sometimes flashbacks appear with nice framing devices such as film grain or chessboards. The voice acting talent, both Japanese and English, are well chosen and well-spoken. Clothes, buildings, and food are all visually amazing. You definitely enjoy watching what’s up on the screen.

If anything, Black Butler can be “too anime” at times. Characters grow large heads and throw fits. The “wooshing lines” behind a still frame make an appearance at least once an episode. Oh, and there are the constant sexual metaphors of man-boy love that might be too much for some. As the series goes on, more wacky characters are added, with more gender-bending and more entendre.

Bottom Line: So you’ve heard about this shotacon thing and you’re curious what it looks like? Black Butler has tense plotting, strong visuals, and witty writing that will keep you watching for more. If you’ve already seen too much anime, or if you’re looking for something involving girls, if the idea of shotacon skeeves you out, or if you think it’s in bad taste to play up Jack the Ripper for laughs, you’ll want to pass.

Funimation has the first 12 episodes of Black Butler available in a limited edition set. You can also view episodes on Hulu.com.

It was recently revealed that the former student of Shichisei Gakuen only became interested in Norman Rafferty because of a tattoo on his back, and a vow that he took when he got it.