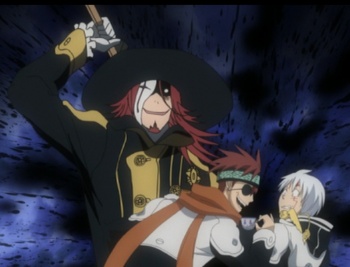 The game-changing first season finale of D.Gray-man set up an epic war between the noble Exorcists of the Black Order and the army of akuma – undead weapon platforms disguised as regular people – of the insidiously evil Millennium Earl. With the lives of the Black Order generals on the line because they possibly hold the key weapon to victory, the second season of D.Gray-man aims to guide both parties down the road to a decisive confrontation.

It aims to, but the second season tends to pull over at every rest stop along the road.

The hunt for the generals and the recently mentioned Heart of Innocence – a more powerful version of the Innocence fragments scattered around the world that are used to combat akuma – leads Allen Walker and his fellow Exorcists on a worldwide fetch quest looking for both. Just like most anime fetch quests involving MacGuffins like Shikon no Tama jewel shards, Sailor Scouts, or Dragon Balls, these D.Gray-man episodes tend to follow a cliché formula. The Exorcists will approach a town to follow a lead about an Order general or Innocence-related activity, encounter akuma to kill, learn that the general is in a different town or the Innocence fragment affecting the town is not the Heart of the Innocence, and repeat when entering another town. The formula thankfully ends when one of the generals finally shows up as an akuma force invades Barcelona.

After teasing viewers with a brief return to the main plot, the second half of the season changes from a series of individual filler episodes into an entire series of connected episodes forming a filler arc. The filler arc involves Lulu Bell – a Clan of Noah member allied to the Millennium Earl – and her attempts to kill Allen Walker’s party during their fetch quest. The episodes during the arc feature a different formula for storytelling where Lulu and her maid plan an ambush, execute it, fail, and begin anew while stopping short of shouting, “Curses, foiled again!”

The production is consistent with the previous season. The 19th century has never looked so picturesque while the accompanying soundtrack accents the intended mood of the scenes, and the English dub is passable. Akuma continue to find new designs and powers to remain unique when encountered: Everything matches the quality of the first season without breaking new ground.

While most of the second season is filler, the episodes are at least entertaining for the most part. The independent plots of the first half of this season resolve quickly within one or two episodes in contrast to the slower multi-episode arcs of the first season. The characters are still the show’s strongest points as they further develop during episodes. Allen’s equally brutal and tragic experiences under his general’s tutelage and Chief Officer Komui’s gradual change from whimsical comic relief to someone shouldering the responsibility of the Black Order are particular gems.

Previously introduced characters from the first season return and start their climb towards their new lives as Exorcists. They quickly learn that the life of an Exorcist is truly a thankless one given the long hours, life threatening danger, and ingratitude of the townsfolk who usually blame said Exorcists for the akuma-related deaths or other oddities. The Millennium Earl and the Clan of Noah have only a few appearances, which is a pity.

It is during the second half of the season when the filler episodes begin to wear out their welcome. If the repetitive plots during that story arc did not show a lack of creativity during this part of the season, the need to reiterate character developments already established in the first season and then reestablished during the first half of the second season hammer the point home. The story then feels like a slap to the face in the finale when everything that developed during that arc cancels out when Allen and company arrive at the destination that they should have reached 20 episodes ago.

No matter how well the side stories, character development, and ways loved ones are manipulated when dealing with the deceased are executed, filler is still filler. Watching the second season of D.Gray-man and expecting the main story feels like going to a fancy restaurant planning to eat the best gourmet meal available but managing to get full from the bread and drinks before the meal finally arrives.

Bottom Line: The second season of D.Gray-man is full of side stories that develops the characters and setting of the series while brushing aside the main plot that originally hooked viewers during the first season.

Recommendation: D.Gray-man will kill a lot of time, which you can use to find more a more satisfying anime to watch while waiting for the next season to hopefully resume the story.

Tom Tonthat is wondering which one of his little sisters will cosplay Lenalee to go with his Komui costume.

The second season of D.Gray-man spans 25 episodes split into two boxed sets. About five of those episodes are arguably not filler.