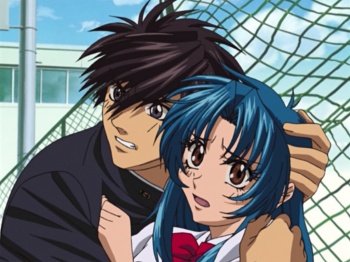 While some anime fans may compare their school lives to titles like Lucky Star, Love Hina, or even Evangelion Angelic Days, I always felt that my high school days best resembled Full Metal Panic. Granted, I was never part of any counter-terrorist military unit that I am at liberty to freely disclose, I prefer a P230 over a Glock, and the most complex vehicle I ever piloted was a car with manual transmission. But Sousuke Sagara and I shared a similar awkward transition when we transferred into a new high school with rules, cultures, and norms that neither of us were really adept at grasping. And through actions that made perfect sense in our minds, the both of us managed to routinely piss off a cute female classmate of ours.

Selected for his age and Japanese heritage, Sergeant Sousuke Sagara of the counter-terrorist group Mithril is assigned to guard high school student Kaname Chidori. But posing as a high school student proves difficult for Sousuke given his hardened soldier lifestyle and lack of civilian common knowledge since childhood. While Kaname is often frustrated with Sousuke’s tendencies to shoot first and shoot again, those same tendencies often save her life when she actually is in danger. Amid giant mecha battles – for no high school anime is complete without giant mecha – and class exams, Kaname eventually learns why she needs such military protection while Sousuke takes care of some unfinished business from his past.

Production wise, Full Metal Panic is appealing to the eyes and ears. The character designs as well as the attention to details are pleasing. Sousuke is full of cliché traits of the high school anime male such as a female classmate who is both frustrated in and attracted to him, a potential harem situation, superior skills against other males, and even a giant mecha at his disposal. But Sousuke breaks the cliché by actually possessing the back story, motivation, and training to believably develop those traits – hooray for a military upbringing.

The mecha combat stands well enough and I like the nice touch of throwing in existing military vehicles into the fray. Some of the CG effects contrast against the animation but those are not deal breakers. The music fits the mood. The English dubbing is above par for an old ADV Films production. Having met both the Japanese and the English voice actors for Sousuke Sagara at a couple anime conventions, I cannot pick a preference.

Full Metal Panic is a layered parfait of action and comedy with sci-fi sprinkled on top. And like a parfait, these layers are typically separated from each other and rarely mix. Most of the comedy stems from Sousuke’s hardwired military training that causes him to overreact to benign high school situations such as panty thieves or girl gossip. Sousuke’s tendency to equate everything to military experience or procedures keeps the humor fresh as he splashes about like a fish out of water.

Then with little segue, Kaname’s life is threatened and all humor is tossed aside as Sousuke and Mithril take out foes with military precision. The battle plans are well thought out and the execution of those plans is efficient, which keeps the show exciting to watch. The blandest part of the parfait is the sci-fi. While giant mecha is an acceptable accessory for military action, the sci-fi elements enhancing them that also turn Kaname into a Chekov’s Gun plot device feel hastily included. Their biggest contributions are serving as a deus ex machina to various stalemates. The sci-fi never really develops and could have easily been omitted.

The indecisiveness between action and comedy ultimately is the main issue with Full Metal Panic. An integrated action comedy could have worked out for the series. But instead it feels like two separate shows with a weak connection between the two. Had Full Metal Panic focused on Sousuke’s duties to Mithril and kept to being a mecha military anime, that would have been fine. Or if it instead concentrated on Sousuke’s inept attempts to adapt to a normal high school, that too would have been fine and is probably why Full Metal Panic? Fumoffu exists. But given the separated layers of mecha action and high school comedy, the result is a Full Metal Panic that is only half great.

You pick which half.

Bottom Line: Full Metal Panic spreads itself thin as it covers comedy and action, but manages to entertain when it does fully commit to either.

Recommendation: It is definitely worth checking out. The action is on par with the other mecha anime and the comedy is a good precursor for the Full Metal Panic? Fumoffu spin-off.

Sure, when Sousuke Sagara breaks through a window to avoid being late for class, he’s macho and a slapstick comedian. But when Tom Tonthat does it, he has to buy a new window.