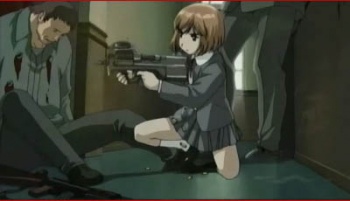 After glancing at the DVD box art and perusing its written synopsis, Gunslinger Girl sounded like an exploitation film where a clandestine government organization with a deceptive cover story trains a gang of innocent schoolgirls to use high caliber weaponry for poking holes into terrorist-shaped blood bags. While the basic plot matches that guess and nothing seems new on the surface, digging further into Gunslinger Girl reveals a more dramatic look into the life of children assassins – albeit children with a few sci-fi augmentations.

Set in contemporary Italy, the Social Welfare Agency is publicly reputed as a charitable institution that rehabilitates victims of severe physical injury using state of the art science. In truth, the Agency is a government organization that modifies dying young girls into assassins with cybernetic enhancements. Adult male handlers oversee their development and together each pair is known as fratello – the Italian term for brother. Throughout the series the Agency dispatches fratello pairs for wet work missions against terrorist threats.

Gunslinger Girl is great from a production standpoint. Italy is beautifully rendered with picturesque sites looking like something out of the Travel Channel complete with art and architecture. The music is delightful from the English opening theme to the operatic ending theme with a variety of scores to match the atmosphere of the given scene. The English dub thankfully decides not to give every character an Italian accent and the script tends to match the English subtitles of the Japanese soundtrack. Probably the main complaint is that most of the handlers sound alike in the English dub.

As the title Gunslinger Girl implies, the missions involve the girls getting into blazing gunfights. The anime shows off a more realistic portrayal of combat instead of the stylized yet realistically impractical gun-fu shootouts seen in most action films and anime. The girls’ tactics that makes the best of their limited resources and weapons are as intricate as they are beautifully animated. Training missions emphasize how tiny details like spent casings littering the floor can mean death during the real deal. Aside from the cybernetic little girls engaged in combat, the effort at realism is very refreshing.

Between missions, the drama unfolds as the girls shed their cold combat demeanors and adjust to their enhanced bodies, new living conditions, and relationships with fellow girls and their handlers. In the first half of the series, each girl gets at least one episode to shine as details of her life and upbringing play out in vignettes. Their upbringings come into play during the later half of the series as they compare their lives to the life of one of their fallen comrades and during one climatic mission requiring every available fratello pair. The storytelling in Gunslinger Girl is slower with occasional cuts of action, but it allows viewers to become more familiar with the characters outside of knowing what guns they prefer to use. The final episode is quite emotional and open-ended.

The fratello relationships between girl and handler is the best aspect of Gunslinger Girl. Five main fratello pairs yield five dynamics such as master & servant, siblings, disappointed teacher & struggling student, coworkers, and even nonexistent. When they are not performing in tandem during missions, the episodes show the bond each handler shares with his charge. No two fratello pairings are alike. The handler’s teaching determines each girl’s weapons and combat style while a brainwashing process known as “conditioning” reprograms them into the perfect obedient assassin. Handlers determine how much conditioning to use, which in turn determines the personality of the girls and their working partnerships. It is potentially creepy for a handler to treat her girl as his personal doll, but fortunately the series never went that route.

Using children for war has always been an unnerving issue. In Gunslinger Girl, the Italian government finds nothing wrong with plucking a sick prepubescent girl off her hospital bed, erasing valuable memories, conditioning her, and condemning her to a short life as the conditioning shortens lifespan. Compared to that, the antagonists that the Agency combats do not seem so bad. At least their henchmen enlisted. Whether due to the time invested training their girl or actual empathy, most of the handlers are at odds with the Agency and hope their hard work is not so easily disposable as a used tissue. At least the girls remain innocently gleeful and happy to be alive-unless that is the conditioning speaking.

The dramatic aspects taking precedence over the action will prevent Gunslinger Girl from being everyone’s cup of tea. But it is worth a look before deciding.

Bottom Line: Gunslinger Girl is a slice of life anime depicting the lives of average schoolgirls living in a dormitory who gain vocational skills through their adult tutors while learning about life between field trips. And the girls happen to be cybernetic assassins working for the Italian government.

Recommendation: The limited number of action scenes and slower pacing will deter some viewers, but the interactions and development of the characters make Gunslinger Girl something different in the “girls with guns” category.

Tom Tonthat wonders why there are no Gunslinger Guys.

Gunslinger Girl spans 13 episodes and is available on DVD via Funimation’s Viridian collection, which includes English dubbed soundtrack, various extras, and subtitles that cannot decide whether to name Henrietta’s handler Jose or Giuse.