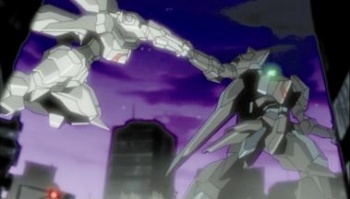 I was able to conduct an informal survey via Twitter and Facebook asking anime fans for the first mecha or giant robot anime that came to mind. The responses covered a range of classic titles like Gundam, Macross, Neon Genesis Evangelion, Big O, Mazinger Z, or Giant Robo, but no one mentioned Jinki: Extend. Why not? Simple: It’s not an anime series worth remembering.

After a life of building plastic models of robots, our teenage heroine Aoba gets to live her hobby when she is recruited to pilot a mecha called a “Jinki” and fight ancient mechanized creatures. The plot feels copied off most of the aforementioned classic mecha series like Gunbuster, but at least the story made sense … for a while.

Although cliché, Jinki: Extend could have set itself apart through believable character development and spectacular mecha battles. But frankly, the only thing unique about the show is that it is set in Venezuela, which is depicted as a beautiful green countryside full of vegetation and the occasional swamp. To its credit, it is the first anime set in Venezuela that I know of, and the pretty scenery is a change from the usual gray buildings of Tokyo.

However, the anime occasionally shifts to said gray buildings of Tokyo as another group of girls uses their Jinki robots to fight other Jinki robots led by a cliché megalomaniac who turned evil and betrayed his mentor. Amid the fighting, a dumbfounded girl named Akao remains reluctant to fight alongside the others until pushed into battle and right into the villain’s plans. The sudden shifts between Venezuela and Tokyo make little sense until it is revealed that the two stories don’t actually happen concurrently.

Sudden shifts in scenes, timelines, and character points of view can make for engaging storytelling when properly choreographed with a good story that supports the shifting setting. In Jinki, the transitions seem random and feel like desperate attempt to confuse the viewer into watching more episodes in the hope that the story eventually will eventually sense.

Further confusion during Jinki: Extend stems from some of the poor character designs. It was bad enough that Aoba has the face and hairstyle of an average Japanese schoolgirl, but to give fellow heroine Akao a similarly generic design just feels lazy, and it feels lazier when you notice that Aoba’s comrade has her face and hairstyle on a slightly taller and more mature body. Still, even if each character was uniquely designed, none of them are interesting or developed enough for viewers to care about during the series.

Lacking an interesting story or character development, Jinki: Extend uses cheap fanservice and shock value to attract viewers. Expect panty shots, girls frolicking in lakes, and a boy who pines for the feel of breasts against his head during the Venezuelan arc. Meanwhile, the Tokyo arc features implied lesbian relationships, a pedophile who stalks a girl who has a big brother complex, and a couple of attempted rapes. All of these cheesecake scenes or serious moments feel out of place and haphazardly thrown into the episodes.

At least Jinki: Extend is competent in its mecha aspect: The Jinki giant robots look good and would make for some fun plastic models kits to build. The combat resembles fights from other mecha shows, with your standard giant robots wielding guns, swords, shields, and pilots shouting the names of their attacks – there’s more than enough fighting and action to go around. Sadly the final battle has an anti-climatic ending and the epilogue focuses more on T&A than actually trying to tie up the many loose ends of the series.

Had Jinki: Extend split the Venezuelan and Tokyo arcs into separate seasons and fleshed out its story and characters, it might have had the potential to be decent. But the final product feels like a rush job with several corners cut, to the point where the only good thing about Jinki: Extend is that it’s only 13 episodes long.

Bottom Line: The pretty scenery and numerous combat scenes do little to make up for the cliché plot, poor storytelling, and cheap shock value of Jinki: Extend.

Recommendation: Skip it. The anime rack of the local video store is bound to have better fare for your mecha needs.