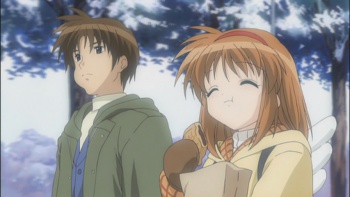 Kanon is an anime adaptation of a visual novel developed by Key. For those unfamiliar, these are games that are played with minimal interaction; players make decisions to uncover story and/or erotic picture sequences. Okay, so not all visual novels are adult oriented, but quite a few (if not most) are, and Kanon is one of them – though there was an all ages version released eventually. If you’re familiar with choose-your-own adventure books, then that would give you a pretty good idea of what a visual novel is. It’s important to have an understanding of what these games are to see what went so terribly wrong here.

In visual novels there are several plot lines, generally one for each main character you encounter. This works well for games because they tend to require multiple playthroughs to complete all the arcs. It does not work well for an anime when you try to cram together all the stories – the exception of course being Higurashi no Naku Koro ni, but frankly Higurashi is an anime masterpiece that has its own unique brand of storytelling.

Yuichi just moved in with his aunt and cousin to attend high school. He is new in town, though he did visit as a child he has little recollection of his days spent there. While attempting to jog his memory, Yuichi befriends every cute girl his runs into, he even takes in a stray or two along the way. But there is something unsettling about these girls and the small winter town; you can sense tragedy in them, you know something awful has taken place here. Amnesia tends to be a dead giveaway for that sort of thing, and every other person has it; Yuichi doesn’t remember much of anything from his visit seven years ago, Ayu doesn’t remember where she left a possession of great value, and Makoto doesn’t remember a damn thing.

The show builds an air of mystery that is more laughable than mysterious. While each character having an unknown past may create for a compelling game, when clumsily presented at the beginning of an anime in such a streamlined fashion it simply does not work. All the storylines take tragic twists, which might come as some surprise had it not been blatantly foreshadowed while introducing the cast. As equally predictable, despite the woeful course these tales take, the endings are always bittersweet. On their own, with a little more focus, each arc could be emotional, but in a cluster they only serve to make the series as a whole melodramatic.

As incredibly contrived as they may be, the initial episodes are also prove the most entertaining. Yuichi is a smartass. For awhile not one thing can be said that he doesn’t have some sort of snarky retort for. This allows for some very funny dialogues, especially with Makoto. Moreover, his personality is a nice break from the spineless, socially awkward male protagonist of anime akin to Kanon. However, while the viewer fully expects Yuichi’s sarcastic witticisms to dissipate as the series progresses, having them suddenly and completely disappear destroys what could have been the show’s saving grace.

Perhaps I’m putting too much emphasis on story. That’s not what this type of anime is about: it’s about adorable girls. For a brief moment, the girls are cute. Each has their own little quirks that are sure to endear them to some viewers: In this regard, Kanon is successful. However, it’s a thin line that separates cute from obnoxious. The series demonstrates no regard for this threshold.

For me, it left the realm of cuteness and became annoying when one of the lead characters lost the ability to speak, allowing them only to unintelligibly whimper for what felt an excessively long period of time. If it doesn’t lose you there I’m almost certain it will somewhere around the 100th “uguu”, or maybe Sayuri speaking in third person will get to you. If by the end you’re not quite fed up, it’s likely you’ve got it bad for one of the countless moe traits and are beyond reason.

As far as production is concerned, with the exception of the soundtrack, Kanon is high quality across the board. Every episode it was a struggle just to stay awake during the opening theme. The music throughout is equally as insipid.

Bottom-line: Kanon does not handle its multiple story arcs well. In fact, it does so pretty terribly. The first few episodes are amusing enough thanks only to Yuichi’s witty banter and whimsical girls, but quickly that all takes a turn for the worse.

Recommendation: Fans of the anime adaptations of Key’s visual novels (Air, Clannad, and of course the original 13 episode Kanon) will be sure to enjoy this. I wouldn’t recommend it to anyone else, unless you’re looking for moe nonsense.

Salvan Bonaminio thinks a snow bunny is a crappy gift, even if you’re a little kid.