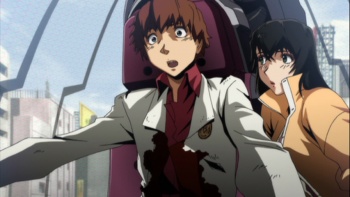 Kouichi is a push-around for the class bullies, but he’s convinced he is righteous. One day, a robot from space crashes on top of him, knocking him unconscious and covering him in blood … but he barely notices, because when he wakes up, there’s a hot naked chick next to him. So, naturally, Kouichi’s first thoughts are to take her home and dress her in his sister’s clothes.

It’s a good thing, too, because soon their city is being destroyed, as giant robots invade! But Kouichi didn’t get through that crash without any changes – he is now a super-powered Factor, able to summon forth his own giant robot “Linebarrel”, simply by … um … groping the hot chick’s breast. He single-handedly defeats the bad guys and declares himself the protector of the city!

If you’re still with us after all that, then you’re ready to watch Linebarrels of Iron, an old-school giant-robot anime. The tone of where everything revolves around a teenage boy’s fantasy of empowerment, sexy girls, and giant robots will endure for many, many more episodes.

Why would a huge military organization put frightened children in charge of devastating war machines, when the nations of the world have standing armies with highly-trained troopers? Linebarrels‘ excuse is that these robots come from another dimension, and each one, er, mates for life by choosing the one pilot who can use it. The miracle of D-SOIL technology gives the pilots limited ability to tap into their robot’s super-human speed, strength, and regeneration. But they also feel anything that happens to the robot, so there’s lots of cries of pain as they suffer damage in battle.

Comparisons between Linebarrels and Neon Genesis Evangelion are inevitable. Both shows have a good-guy organization that the whole world depends on to save them, and it’s based in Japan. The bad guys are some kind of shadowy cabal who meet in dark rooms and have a base of operations that no intelligence can find. The good guys are led by an older patriarch who leads the acronym organization, attended by his curvaceous, nameless secretaries who shout out techno-speak exposition every time a corner of the world is threatened by bad guys. The robot pilots are mostly teenage orphans, and many of the teenage orphans have very well developed breasts, that don’t quite have the “Gainax bounce“, depending on which animation team is working that day.

Linebarrels is the typical mix of cel animation, painted backgrounds, and CGI robots in the typical Gundam style – small heads, long arms, spiky antennae, and sophisticated guns. The science-fictiony robots coupled with sexualized teenage go-getters is highly reminiscent of Evangelion, but the over-the-top characterization owes more to anime classics like Mazinger. Katou, the main bad guy, wears a fur-lined pimp suit and plays Rogue on a classic computer, while his second (a young man in a cowboy outfit) gives him status reports on the villainy in his businesslike monotone. His henchmen consist of broadly-drawn, over-the-top bad guys such as a dead-eyed Russian, a wild-haired bloviating bully, and a creepy fat nerd.

Unlike Evangelion, there’s far less whining and pointless filler episodes. The tone is more upbeat, and the bad guys are much more in-your-face and up front about things. There are frequent diversions into comic relief, fraught with fan service. Each installment strives to balance the melodrama of good vs. bad with some teenage angst thrown in.

Bottom Line: Linebarrels of Iron is loud, it’s bright, and it’s fun. And it stays fun, with a tone that’s consistent throughout several episodes. You came to see big robots fight, so you will see big robots fight … and you also get to know the people involved, so you can care about what’s going on.

Recommendation: If you’re curious what this whole mecha phenomenon is about, then Linebarrels is an excellent introduction to the giant-robot genre. Best watched as one or two episodes at a time, and a great addition to any anime club’s lineup.

Funimation has the first 12 episodes of Linebarrels of Iron on two DVDs.

Framed for murder Norman Rafferty is released from jail when the doctor comes back from the dead … so that Rafferty may commit the very crime he was put in jail for, a killing he is all too happy to make.

Avatar: The Game Puts the Hurt on Ubisoft