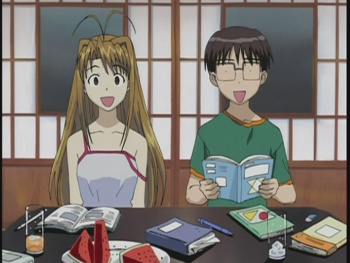 The year is 2001; all the cool kids have flat-top haircuts and parachute pants, everywhere you turn is a harem anime – now I might be a little bit off on this one, but I am pretty sure that last part is right. It was around this time I decided to give up on the romantic comedy side of anime all together. There was one show in particular I sought to avoid… I have, since then, thrown away my resolution to turn a blind eye to the genre. However it did seem as if I would be able to live out the remainder of my days having never seen Love Hina. Then the e-mail came; “You’re on Love Hina, with a deadline of Tuesday 22nd. Enjoy!” The idea of watching a series I had dodged for so long haunted me, the word ‘enjoy’ echoed in my mind, mocking me as I awaited delivery.

What happened next rocked me to my foundation: I enjoyed it… a lot. The question is “why?”

The scenario is a familiar one: Keitaro, a socially awkward young man becomes the live-in manager at the Hinata Apartments, which is home to five beautiful young girls. When Keitaro isn’t studying for the Tokyo University entrance exam, which he has failed multiple times, he spends the bulk of his time inadvertently stumbling into the breasts of his tenants and various other compromising situations.

Love Hina is filled with more clichés than you can shake a stick at (see what I did there?), however it’s executed in such a manner that one would be hard pressed to find faults. Incredible characterization is the key to the series’ success: Each character has their unique back story and personality, and therefore their own unique way of delivering humor.

Whereas most harem stories have a tendency to forcefully shove the supporting characters into the backdrop as the primary love interest steps forth, such is not the case with Love Hina. At no point do any of the girls begin to feel as if they’ve become mere footnotes as the plot progresses, in fact some see much of their development and face time in later episodes. This allows for rich relationships to form within the supporting cast, therein preventing the ‘world revolves around the protagonist’ feeling that so often makes the lead characters more annoying than likable.

Perhaps more importantly, keeping the entire cast on center stage allows the show to be funny throughout. Never do Naru’s slapstick or Shinobu’s so-cute-it-hurts methods of making the audience laugh begin to feel stale. This is one of the few instances in which running gags actually remain humorous.

The visual style and animation are rock solid. The character designs are exactly what they need to; familiar, but refreshingly so. The synth music perfectly captures the spirit of the series and compliments what is happening on screen — but you’d probably have to kick your own ass if you found yourself listening to it out of context.

As well executed as it is, Love Hina is not entirely immune to the pitfalls which are so prevalent within the genre. It hits full stride just before the halfway point, and then suffers from the all-too-common one step forward/two steps back mid-series lull which is a given in nearly every harem anime. A handful of filler episodes are tossed in to break things up, depending how one views it this could be a good or bad thing; they still provide a fair amount of laughs but do leave the viewer somewhat unsatisfied.

Normally such a low point would have me suggesting that perhaps things ran a bit too long, but the truth is even during this weaker stretch of episodes it’s still entertaining as hell. So much so, that I found myself watching the Spring and Christmas specials immediately followed by Love Hina Again after I had completed viewing the 25 episode TV series.

Unfortunately, another trapping of the genre is that it’s damn near impossible to creating a lasting impression. You’ll remember liking Love Hina and you’ll remember it’s funny, but ultimately it’s not incredibly memorable – on the plus side this may increase its replay value.

Lastly, I was unsure how I felt about the dubs. I thought I would say something to the extent of ‘the dubs are pretty good, though they do take a bit of getting used to’. I then asked myself if an adjustment period should be required in order to find voice acting bearable. I answered my own question with a resounding no… y’all.

Bottom-Line: Love Hina fills a sock with nearly every anime cliché in the book, it then bashes you in the skull with that sock over and over and over again until all that’s left is some sort of soupy mess and you cannot help but laugh. The series is near flawlessly executed and has an abundance of personality to spare. I loathe the harem genre, yet found myself unable to be numb to Love Hina; there is simply an indescribable, undeniable charm.

Recommendation: I recommend this to anyone who is a fan of anime – I wouldn’t expect it to create many converts – that has even the slightest fragment of a sense of humor. I would even go so far to recommend this to dissenters of romantic comedies: if you find yourself unable to be swooned by Love Hina you can safely write off all works of this genre with peace of mind in knowing you wouldn’t enjoy any of them – it could also mean that you’re dead… might want to get that checked out.

Ocarina of Time Music As Played By Full Orchestra

Avatar Breaks Even, Surprises Everyone