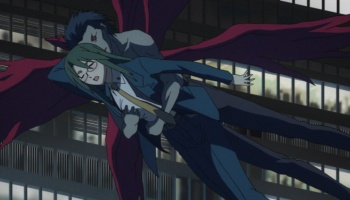 Sometimes I tire of anime that prominently features spunky schoolgirls, giant bipedal robots, cute mascots, super-powered brawlers charging up energy blasts, or a flock of girls competing over some guy with the sex drive of a wet noodle. Occasionally I wish for anime that tells a good story and features memorable animation. RIN ~Daughters of Mnemosyne~ manages to do just that while simultaneously reminding me to be careful what I wish for.

The reason for these recurring events would take Rin several lifetimes to comprehend, which is fine since she is immortal. A key element in Mnemosyne involves the Norse tree Yggdrasil, which spews “Time Fruits” into the air and into people’s bodies. Women who absorb them become immortals like Rin. Men who consume them turn into angry winged angels with the ability to devour immortal women. Being both immortal and angel, Apos is a sadistic bastard with special plans for Rin.

Those familiar with the late night softcore porn of Cinemax will feel right at home watching Mnemosyne. Intending to be an adult series, each episode contains as much sex and nudity as it does plot. The T&A starts slow with undressing scenes and shower scenes. Then it traipses along the edge with hetero and lesbian sex scenes. Then it finally leaps over the edge with scenes of rough angel sex. Even if Mnemosyne does make angels fornicating with the immortal women who are driven by lust at the sight of those winged man-beasts integral to the story, there is such a thing as simply trying too hard.

Hand in hand with T&A comes violence to turn Mnemosyne into an erotic thriller. The high production values of this series allows for some well-choreographed fights that are animated beautifully. Shootings and stabbings become commonplace throughout the series; since Rin is immortal, the writers and animators of Mnemosyne feel the need to see how far they can abuse a character who never dies permanently by putting her in various states of pain and death. Expect to see Rin suffer from forced body piercings delivered via torture, acid burns, explosive damage, and liquifying into a blood smoothie after falling through a jet engine. Similar to the T&A that tries too hard, the shock of the violence in Mnemosyne quickly fades as viewers grow desensitized.

Another interesting aspect of Mnemosyne that is rarely seen in anime is that each episode represents a year of its timeline spanning from 1990 to 2055. Mortal characters visibly age between episodes as younger descendants are born to take over roles of people who are too old or dead. Technology also advances to change characters or serve as plot devices. The first two episodes set during the 90s bring back a nostalgic feeling of simpler technology. The futuristic episodes show some cybernetic developments and the ability to download items and programs into the real world, which would be pretty handy to have now.

For something that does not rely on familiar anime tropes, Mnemosyne does a pretty good job of telling a story even if it tries too hard to stand out. At best consider it a guilty pleasure anime to watch during the late hours when the premium cable is busted. Just try not give too much thought about the blood smoothie or angel sex.

Bottom Line: RIN ~Daughters of Mnemosyne~ is a supernatural film noir with pretty good storytelling that is hindered by its heavy use of shocking sex and violence that borders on grindhouse exploitation without the film aging.

Recommendation: This anime is worth a look if you are in the mood for something different.

Tom Tonthat never thought he would ever use the terms “blood smoothie” or “angel sex” in anything he wrote.