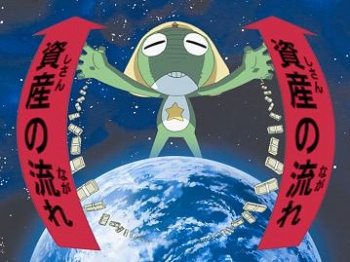 In the anime Sgt. Frog, a bunch of short, big-headed, multicolored aliens land on earth . They each have a personality trait so incredibly manic, that it’s impossible for them to get anything done because of how they trip over themselves. Their superior technology keeps getting them in trouble because of their inferior intelligence. Also, more characters keep showing up. Wacky hijinks ensue!

Based on a popular manga, this TV show follows Sergeant Keroro, a toddler-sized green frog-like thing who wants to conquer Earth, but he’s so incompetent that human children regularly beat him up. Addicted to comic books, video games, and model-kit building, Keroro makes his home in the crawl-space under the stairs.

Oh, and the mother of the Japanese family that he lives with is a manga editor; she’s studying his life and cribbing his adventures for a popular comic series. More episodes add more characters – at first, it’s the other abandoned members of Keroro’s platoon, but later there’s ghosts, magical girls, ninjas, and anything else that might be funny.

Sound familiar? This type of situation comedy is very popular in anime, going back to the quintessential Urusei Yatsura. It’s a simple formula: weird alien juxtaposed with normal family. Every few episodes, have a “My Favorite Martian“ moment (Oh no, the humidifier is making the Sarge so moist, he’s become dangerous!) When things start to get dull, add a new character, who will either move into the house or will live a convenient distance away. And space aliens can look like anything, from tentacle monsters to magical girls to shape-shifters who can … um … become tentacle monsters or magical girls, so new characters are only limited by the writer’s imaginations. Or by what’s funny. Or what might be another merchandising tie-in…

When anime is ported out of Japan, it is almost always dubbed for an English-speaking audience. While most of the animation stays the same, the scripts for the American voice actors were re-written, sometimes from whole cloth. References to Japanese culture are often removed entirely. Because Japanese words usually have more syllables than English words, it’s often necessary to add a lot more English words to make the many mouth-motions match up … but even then, most English casts dub even more dialogue over the quiet moments in the show – moments that might have been thoughtful, reflective silences by a director inspired by a Zen-like aesthetic. Jokes that make sense in Japan, especially puns or word-play, will make almost no sense in English. A translator is left with a choice: formally translate it word-for-word, and let the joke fall flat … or find a similar idiom in their own culture and swap that in?

So which version is better: Sgt. Frog subtitled, or Sgt. Frog dubbed?

In the Japanese version, you’ll hear a lot of the same lines repeated over and over. Bits of quiet will be interrupted by loud outbursts, for comic effect. There are puns – lots and lots of puns. (A cute magical girl is named Angol Moa. Get it?) Female characters will constantly worry about being too bold in front of the boys, lest they be branded as “unfeminine” and undesirable. Locations, places, and fads that everyone in Japan knows by heart will be presented without context. If you’re a die-hard otaku who learned Japanese to appreciate a show that’s “unadulterated” by localization issues, then you won’t be disappointed at the non-stop word-play and the riffs on Japanese pop-culture that you’ll find in Sgt. Frog, subtitled.

In the English version, you’ll get three times the jokes, because there’s three times the dialogue. The “shotgun” approach to humor means someone’s talking all the time, so even if the joke is bad, wait a second and there’ll be a better one. What might’ve been the same bland, expository observation is now a scathing witticism in the English version. The narrator will even join in the fun, making fun of the misspelled “Engrish” words or the fake products in the background. If you love those fan-made “Abridged” versions of series, then you’ll be amused at the non-stop witty banter and the riffs on American pop-culture that you’ll find in Sgt. Frog, dubbed.

No matter what audio track you choose, the animation is good quality. As befits a comedy, the visuals are jumpy and springy, and the frame-rate is always good. Colors are simple but lively, with the occasional computer edits in post-production for drama.

Bottom Line: Funimation obviously has the self-aware, DVD market in mind, with how they’ve taken a silly comedy and added in a lot more snark. It’s cute, it’s funny, it’s an anime sitcom.

Recommendation: It’s a great addition to a anime collection, and it’s got something for both the purist and the casual fan. If you like Doraemon, Urusei Yatsura, or even Invader Zim, you might consider the gonzo-alien humor of Sgt. Frog.

Norman Rafferty learned much of his heritage he never knew about while dealing with five alien girls, each of whom has some sort of romantic interest in him.

BioShock 2 Returns to Rapture in February