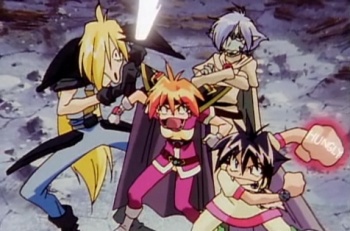 Most great franchises like The Godfather and X-Men ran out of steam by the third volume. The first two volumes use up most of the good ideas, so producers were left scraping the creativity barrel to finish the franchise and hopefully start something new. After regaling audiences with the medieval fantasy & comedic misadventures of the short-tempered Lina Inverse, idiot swordsman Gourry, energetic Amelia, and stoic Zelgadis during The Slayers and Slayers Next, the quartet attempts to have the proverbial lightning strike a third time in Slayers Try with not-so-stellar results.

Thanks to a retcon during Slayers Next, Lina and company have a whole new world to explore and potentially destroy with their haphazard sorcery and bottomless appetites. Filia the Golden Dragon recruits them to fulfill a prophecy while her mace or dragon powers does the talking when she loses her composure. Throughout the series Lina & company find themselves flanked by Monsters, Dragons, and a particularly annoying anthropomorphic fox as their comedic and action adventures eventually boil down to facing against yet another godlike Monster who threatens to destroy the world. At first glance, Slayers Try follows the adage of “If it isn’t broke, don’t fix it.” The comedy is screwball. The magic spells are destructive. The evil force after the protagonists is a big threat. It is that same formula that worked in the first two Slayers series and they were both great.

After a few episodes it becomes clear that Slayers Try adopted the adage of “If it ain’t broke, you’re not trying.” While trying to stand out from its predecessors, Slayers Try breaks the formula that made Slayers great in the first place. The characters are a noticeable change. Besides Filia, Slayers Try introduces several new characters. Despite their vibrant colors, gray is the dominant theme of those characters. None of their motivations are ever defined as truly good or evil. While waxing philosophically about the greater good versus individual rights is mentally stimulating, there are simply so many issues going on that it is hard to tell who hates who and who is currently allied with who. Usually the dense Gourry asks for a simplified explanation or Lina loses characteristically shot temper and browbeat every quibbling faction to help resolve the situations. But now both seem tired and allow themselves to get dragged into the messy bickering.

Because of the number of characters and their issues, the pacing of the series slows down as each explains the origin of his issue and who is to blame. But the whole web of issues becomes moot when everyone finally joins forces to defeat the evil monstrous deity looming over them. Had the characters been interesting, it would have made for wonderful character development, but here it only drags things down. The monstrous deity itself suffers from the laziness of the writers. Gone are the ancient mythical sounding names like Shabranigdo or Hellmaster Phibrizzo. Instead, Slayers Try names it Dark Star, which would probably be a better name for a small moon in a sci-fi movie franchise set in space.

Comedy still prevails as Lina and company pile on insults during farcical situations as much as they pile on food during meals. Filia’s hostile exchanges with Xellos are the freshest comedic gems of Slayers Try. Sadly the rest of the comedy is not as good. Jokes from previous seasons creep in and the characters make it a point of reminding viewers that previous seasons already did those jokes. Fourth wall breaking commentary changes from subtle jabs to blatant announcements of, “Hey, you should be laughing at this!”

The outer world introduces new concepts to the medieval fantasy setting like guns and bombs. But after seeing that they are no match to the classic Fireball spell, watching further failures of gunpowder in this fantasy anime grows tiresome. Unlike previous seasons, Slayers Try makes no effort in incorporating the comedic filler episodes into the main story. They throw a block of them in the middle of the series and after completion, Lina simply says it is back to the main story. It seems the staff of Slayers just phoned it in this time.

Slayers Try marks the end of the old school Slayers franchise of the 90s and if nothing else, shows that it should of ended after Slayers Next. Hopefully 10 years will have been enough time for the staff to rest and breathe new life into the newly revived Slayers Revolution.

Bottom Line: While retaining the same fantasy magical action and comedic formula of previous Slayers anime, Slayers Try is the weakest of the bunch with its slow pacing, confusing gray areas, and less than stellar jokes.

Recommendation: With the superior The Slayers and Slayers Next already available, there really is no reason to watch Slayers Try except to complete the old school Slayers trilogy.

Tom Tonthat thinks the events of Slayers Try could have been avoided if only someone gave Valgaav a hug.