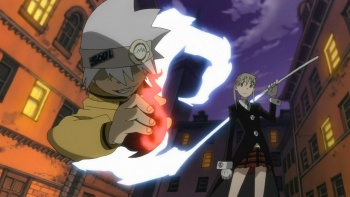 Before this assignment, I previewed the first English dubbed episode of Soul Eater during January’s SacAnime thanks to a panel hosted by Funimation. I literally sat a fist’s length away from Vic Mignogna (Death Scythe) and a stone’s throw away from Laura Bailey (Maka) and Travis Willingham (Free). Had their voice acting been awful, I could have jabbed my fist at Vic and thrown stones at Laura and Travis before hundreds of fans present at the panel promptly killed me for assaulting their beloved voice actors. But from home, I can review Soul Eater without fan frenzy or getting starstruck by charismatic voice actors.

Death himself founds the Death Weapon Meister Academy (DWMA), a school where student weapon meisters aim to bolster Death’s armory by honing their skills and collecting corrupted souls who may potentially become the demonic Kishin. The DWMA shares a similar curriculum with the Hogwarts School of Witchcraft where classes take a backseat as the school’s more interesting students (consisting of an overachiever, an idiot, an obsessive compulsive, and the partners of each student) befriend each other while establishing their reputations by kicking some evil folks. One minor difference is that instead of training to become witches, DWMA students train to kill witches.

The elite school setting and emphasis on only a handful of students out of that entire school body are cliché in most school anime, but Soul Eater has wonderful presentation and charm that lets it stand out above the cliché. The guffawing sun and drooling moon hovering over the picturesque Death City serve as constant visual reminders of the contemporary magical setting throughout Soul Eater as people transform into weapons that the show’s “meisters” wield to combat the witches wreaking havoc.

The feud between the DWMA against witches and corrupted souls allows Soul Eater to show off action packed fights filled with a variety of stylish choreography, lethal weapons, magic spells, special attacks, and plenty of monstrous fiends. Reinterpreting historical and fictional sociopaths into spiritually corrupt humans for meisters to kill was a nice touch. Storytelling tends to flip between intense action or emotional drama to comedy with dashes of fan service. Whether this is excellent directing or schizophrenic writing, it is executed well and keeps the viewer surprised. Not even emotionally draining hospital visits are spared.

The characters of Soul Eater are probably the best aspects about the anime. As one of the few elite academies lacking a school uniform policy, each featured student wears an outfit that reflects his or her personality while appealing to various fan bases. So expect to see studious schoolgirls, gaudy witches, street smart cowgirls, sharp-dressed men, sultry catgirls, and ninjas – because no action anime aiming for mass appeal is complete without ninjas. Each major character has traits that are consistent through the season and are quirky and memorable. Even bit characters who only occasionally appear leave an impression.

The first 13 episodes do a good job of establishing the quirks of the main characters but hopefully the series will develop them beyond those quirks lest they grow stale. Since teamwork between weapon and meister is a key element for the DWMA, the interactions between characters are explored. The changing team dynamics that occur as members bicker amongst themselves or become better friends occasionally gets deep as they tackle the impressively designed villain trying to kill them.

Soul Eater suffers from a few minor production glitches. Since the main characters got most of the animation and character design budget, most of the other students of the DWMA tend to look like darkly shaded cardboard cutouts during scenes with the main characters. Adoration of the English dubbed cast will vary as some match well with the Japanese counterparts while others are unintentionally grating. The English adaptation of Japanese puns from the original dialogue is occasionally clumsy.

The action, humor, simple plot, and characters with various degrees of animated awesome form Soul Eater into a very well-rounded package that is an entertaining safe bet. If anything, Soul Eater serves a gateway drug anime for people curious about the entertainment medium that can potentially hook them into the deeper anime titles that may never air on cable television. I can personally attest to Soul Eater‘s gateway effect when my teenage cousin began watching it with me. Now she wants me to bring new anime whenever I visit. And if my cousin is reading this review: Yes, I am working on getting assigned that series you want.

Bottom Line: Combining the academic setting and students of Harry Potter with the hunt for wayward souls of Ghostbusters, Soul Eater features a lot of everything you find familiar in action comedy anime presented in a style you will find refreshing and almost original.

Funimation sells the first 13 episodes of Soul Eater in one boxed set that includes the Soul Eater Late Show as an extra feature. I still have no idea what to make of it after watching.