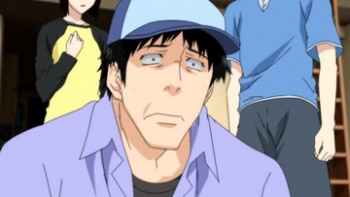 Episodic television is at its best when it takes both the short and long view. Each installment should have a plot point or two, a climax to propel the story along, some insight into a character or two, so that there’s something worth watching. But in the long run, story arcs should be resolved; recurring images should develop the theme; and there should be plenty of breathing room for dénouement to resolve that’s not rushed, forced, or (in the case of a cancelled series) simply not there at all. Any long-term fan of anime has seen the many padding techniques endemic to a long-term series: badly-realized characters; fight-scenes that slog interminably; or the flash-back episode of annoying reminisces.

Welcome to the NHK is a self-contained 24-episode series, and that length is perfect. It’s enough to tell the story of Sato, a Japanese college-drop-out, and his neighbors: Misaki the teenage girl who insists on curing Sato of his social fears, and Yamazaki the misanthropic game developer. Welcome to the NHK, Part 1 introduced the characters and took the viewer on a tour of Japan’s hikikomori culture — paranoid drop-outs who never leave the house. Part 2 picks right up on the first half’s cliff-hanger, where Sato accidentally got mixed up with a nefarious “Off Line Club”, one of Japan’s unfortunate suicide societies. Will he survive?

NHK is holistically conceived – the main story begins and ends in a neat 24 episodes, and Part 2 is at its greatest when there’s a twist or a new development on something that happened in Part 1. Images repeat over and over again – street signs emblazoned with stern warnings, stray cats that hang around in late parks, a ringtone that’s a theme song from a cheesy anime show. When these details show up again, each with the baggage of the previous episodes attached, it makes for a multi-leveled story that can both be appreciated for what’s happening now and for what happened before. (Unfortunately, these frequent repetitions also make it hard to talk about what happens in Part 2 without giving away spoilers, so you may want to skip ahead to the “Bottom Line”, below.)

The characters remain so self-absorbed, they can’t help each other … or even themselves. When Sato’s mother calls, he doesn’t think to ask her why his father is in the hospital – he’s far too concerned with how his parents won’t be sending any more money. Yamazaki remains so convinced that love is an illusion he plays a cruel trick on Sato, and later another one on his own girlfriend. And it’s not until the penultimate episode of the series that anyone finds out what’s wrong with Misaki … despite how anyone could have walked to her house and just asked her guardians about it.

Sato’s little triumphs are when he doesn’t give up and when he’s lucky enough to come out ahead. But he doesn’t always win … and that’s okay, because it’s his crippling fear of failure that keeps him inside the house, too ashamed to talk with other people. Only when he learns that mistakes are okay, and that he’s not alone, other people make mistakes too, does he finally come to grips with his problems. Part of his evolution is when he stops imagining his appliances as talking about a conspiracy … and instead imagines what the people he knows would say. Is he really a shut-in when he knows so many people?

For folks who haven’t seen anime before, or those who have been put off by the more pandering aspects of what they’ve seen, Welcome to the NHK is an excellent dose of maturity, an insight into some of the stranger aspects of the culture. For those fans who are drunk from hours spent watching giant robots and spandex heroines, NHK is a hard dose of deconstruction of the Japanese culture that generates this material.

The Bottom Line: An excellent episodic series, highly recommended for everyone. If you’re a hard-core nerd, you’ll snicker knowingly about the characters’ naiveté about “gold-farming”. If you’re simply a fan of good television, you’ll get a dramatic series about the problems of modern living, with a few jokes thrown in.

Recommendation: Everyone should watch this anime.

An enigmatic figure, Norman Rafferty appears as a grinning juvenile who travels on golden inline skates and attacks people with a metal baseball bat.