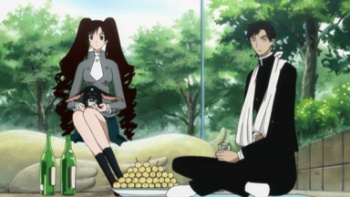 CLAMP is the name of a collective of comic artists and writers. A standout in their field, CLAMP are like a rock-star supergroup – they’ve made some of the most popular comics that appeal to the young-adult set, and some of the most controversial. Their series about millennial apocalypse, X/1999, was cancelled before the storyline finished – the editors were concerned that it was getting too violent. More recently, CLAMP’s Cardcaptors Sakura anime was translated and dubbed for English-speaking audiences, then run on broadcast television. These releases were highly edited – the North American release was a mere 39 episodes, scaled down from 70, because of the sexual situations deemed inappropriate for foreign audiences.

That brings us to xxxHolic, CLAMP’s new foray into young-adult fantasy. This time, it’s about Kimihiro Watanuki, a high-school boy who is plagued by invisible spirits only he can see. One day he happens across the shop of Yūko Ichihara, a woman who immediately contracts him as after-school help, ostensibly as the new houseboy, insisting that such a thing is “inevitable”. Soon Watanuki is getting mixed up in Yūko’s business, from divinations about the future to freeing people from the dark spirits that threaten to destroy them. Watanuki imagines he has a rivalry with fellow classmate Dōmeki, a jock who really couldn’t care less, over the affections of Kunogi, the cute girl he likes.

xxxHolic could easily sit on the shelf with Bleach, Yu Yu Hakusho, and a plethora of other anime about a young schoolboy who can see the supernatural world and thus gets caught up in their secret conflicts. And just like its ilk, xxxHolic has a lot of the familiar tropes. Big burly high-school friend joins our hero, even though he can’t see ghosts? Check. Older, more sophisticated woman gets our hero to do things while only telling him part of the story? Check. Does she make jokes at his expense? Check. Oh, and is there a marketable cartoonish monster thing that’s more comic relief than actually useful? … Well, if that was all xxxHolic had going for it, it would be lost in a sea with all the other supernatural-schoolboy anime.

The art production in xxxHolic is uniquely CLAMP’s. Characters are tall and angular, almost like walking Barbie dolls. Unimportant background characters don’t even get their own paint jobs – they’re drawn as gray silhouettes, just like they might be in the background of a manga. Everyone’s impeccably dressed, especially our heroine, who might change outfits two or three times in one episode. It’s the risk of cheap anime to pad an episode with talking heads that speak in portentous voices while their bodies never move; xxxHolic goes the extra mile with fancy clothes, dynamic camera angles, and expressive body language.

Unlike the typical monster-of-the-week show, xxxHolic‘s conflicts are very rarely solved directly. There’s not a lot of overt violence, but there is a lot of emotion. The trouble brewing may manifest as a black smoke that only our magically-sensitive heroes can see, but the real problems are the stuff of soap operas: internet addiction, philandering, compulsive lying to fit in with the “cool kids”. The few dire confrontations are very quick, and certainly not the sort of violence that blows up a city block. (In particular, the stand-out episode “Contact”, about that old cliché of the monkey’s paw, is one of the most powerful simply because the tragic violence is so brief in such a low-key series.)

Bottom line: This anime is CLAMP at their most sophisticated, a world that’s full of “mature situations”, but not the sex and violence unsuitable for the teenage set. Anime is a visual art, and xxxHolic is very pretty to look at. The fine writing doesn’t hurt, either, and (unlike some other manga-to-anime conversions) the pacing is always fluid, not padded.

Recommendation: xxxHolic is an excellent anime for the teenage girl set. Dramatic without being gratuitously violent, mature without being puerile or pornographic, the shōjo fan will love this show, and other folks should watch an episode or two, if just to see what the fuss is about. The only caveat is that the main adult character Yūko is an unapologetic sybarite who drinks and smokes, even though the kids never do.

Destined to battle the shrine-children, Norman Rafferty is a powerful esper believed to hold the key to the fate of the world.