I didn’t really ever think I’d care about Connect Four again, but here we are. Apotheca: The Secret Potion Society is a quick, approachable game of positioning and control that’s currently Kickstarting for release next summer. It’s also a match three game – yes, like Bejeweled or Candy Crush Saga – but carries a surprising depth alongside the traditionally addictive “just one more time” gameplay the style connotes. Slowed down for the tabletop, made a little more strategic, and a lot more competitive, I found myself wondering why we hadn’t seen more games take this tack in the past. 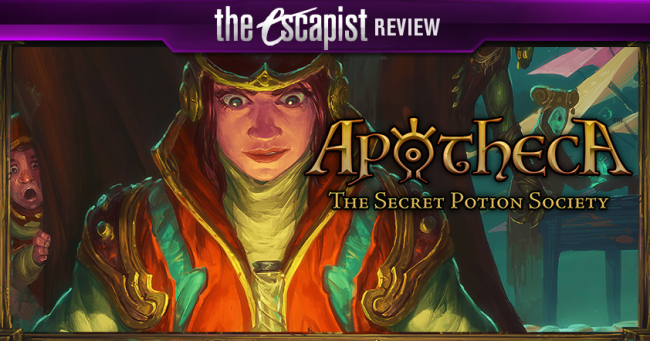 In Apotheca, players are apprentice alchemists trying to be the first to create three potions in order to join the secret society that dominates the magic market. They do this by manipulating the position of potions on the board, trying to match three of a color in a row or column – when they do, they pick those potions up and move on. The twist here is that the potions are placed face down by default, meaning you’re bluffing and jockeying with other players to see who’ll flip over what and when to create those precious matches. On your turn, you take two actions from among a choice of revealing a facedown potion, placing a new facedown potion, using the power of a special apothecary you have, and hiring a new apothecary. The apothecaries are simultaneously your special powers and your path to victory, because when you get a match you’ll have to place that match over an active apothecary, since you’ve pleased that seller with your product and they’re done with you.

Since you get to see your potions before they go on the board, you get to know only about half of what’s going on at any given time. Because so much is secret, you’ll use both your own knowledge and a guess at what your opponents are planning to get where you’re going. At the same time, you need to flip over potions and reveal what they are to get the gems you use to buy new apothecaries so you can get their powers. This leads to situations where you want to avoid revealing something you know your opponent needs – but you have to flip something to get a useful gem that’ll let you buy the apothecary you need. 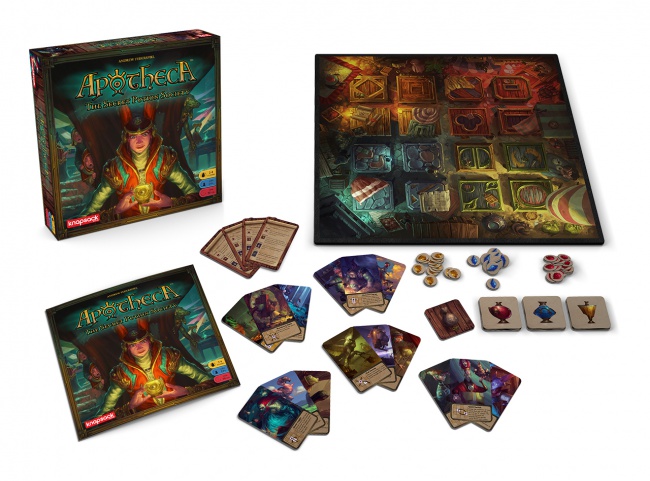 That said, those same problems you get into with your placement can cause the game to have unfun situations. If a player develops a significant lead in knowledge or potions made, they’ll sometimes have to make choices that actively hold them back. It’s rare, but frustrating, and speaks to the game’s effective catch-up mechanics. Because you lose an apothecary’s power when you score a point it means you’re always losing momentum each time you jump ahead. No worrying about a runaway leader means that each game is almost always a close one, but it also means that the game almost always does take the full thirty minute playtime. It’s tight, but occasionally feels too tight – like little bits of randomization are what decided the game instead of player skill and choice.

That said, I enjoyed the hell out of Apotheca over the games I played. The few situations where the game felt like it decided itself were just that – few. Despite that frustration, I want to play more Apotheca and I want to play it with more people – specifically two or four players. While the game plays with three, the two player duel and four player team play are hands down more fun. Either way, it’s approachable for new players and hardcore board gamers, both of whom have seen these mechanics before but haven’t seen them in precisely this way. Over six or so games with different groups of people, I saw different reactions and strategies develop. I’ll definitely keep this game in mind moving forward, and I look forward to adding the final version to my collection.

If all that sounds good, go check out the Kickstarter.

Recommendation: This one surprised me – and it might surprise you as well.