“Edie’s Wedding” shows that Archer is still the king of self-referential humor, but sometimes needs to scale it back for something new.

One of the best parts of Archer, outside of clever dialogue and rapid-fire jokes, is its excellent cast of characters. Strip away the spy parody premise and insanely raunchy humor, and what you’re left with are well-developed personalities who are engaging in any setting. That’s why Season 3 could basically do “Archer in Space” and still be amazing, but also why we’ve become emotionally attached to the cast – everyone raise their hands who literally teared up during the phone call scene in “The Holdout”.

At first glance, “Edie’s Wedding” is an episode that’s going hit those emotional buttons perfectly, and it gets awfully close to doing so. Sadly, when the credits roll, for some reason it still hasn’t quite crossed the finish line. Perhaps that’s because Edie’s wedding, a great opportunity for comedy and drama, doesn’t get much attention. It could be that a returning character completely derails the plot and steals our focus. Heck, maybe it’s because the writers are being too forward about the emotional impact for a change, instead of hiding them behind jokes.

But mostly, I think it’s because Archer is still following Season 6’s trend – resurrecting plot points from the past instead of going in a new direction. Thankfully, it’s still a great, tightly written episode that will make you laugh in all the right (and wrong) places. But this time, you can’t help but feel like Archer missed opportunities that could have made the show even better. To say more will takes us to the spoiler zone, so feel free to watch the episode on FX, Hulu, or Amazon before continuing.

“Edie’s Wedding” gets off to a great start with a perfectly hilarious scene that doesn’t need a line of dialgoue. Archer walks into the office break room to find Pam crying hysterically with no explanation. He’s the only person in the room, and she’s directly blocking the coffee he came for so he’ll have to interact with her. But just when you think he’s about to actually comfort her, he nonchalantly nudges her aside and goes about his business. What’s great about the joke is Archer finds a way to play it out for a solid minute: After moving her to get coffee, she’s now blocking the fridge where cream is stored. After getting cream, he needs to navigate around her again to get a stirring spoon from the cupboard. And then of course he needs to add alcohol, because otherwise why have Irish coffee?

This is exactly why Archer is a great show and not a succession of sex jokes. It gets humor, timing, and all the elements that make otherwise ordinary moments laughable. Even when Archer pretends to be a silly cartoon for adults, very smart, very funny people are making it work behind the scenes. And after six years, they’ve got this routine down cold.

Of course, at just the right time (when the coffee is perfect and he can leave), Archer finally admits he can’t abandon Pam and starts talking to her. This is where the “one-step-forward-one-step-back” mentality starts to creep in: Ideally, this should be the emotional development part of the scene, since you know, Archer isn’t supposed to be an asshole anymore. But when he can’t understand a word she’s saying after ten seconds, Archer returns to his usual fallback: Slapping Pam to her senses.

Sadly while that’s consistent with past episodes, it does kinda kill some of the scene’s character building. Yes, I get that it’s part of his established routine, and reflects classic spy movies where heroes casually slapped women. (Seriously, go and watch Sean Connery’s James Bond. It’s super weird.) But like I said, we’re supposed to actually like Archer after six seasons. Are the casual beatings really the best way writers can move the scene forward now?

To its credit, Archer gets back into the flow of things pretty quickly. Pam reveals that her sister Edie is getting married and has made her a bridesmaid. But that’s not good news – Edie made Pam’s high-school rival Maid of Honor as part of a long-running campaign to spite her. Basically, going back home for the wedding is going to be a full day of horror where Edie is terrible and Pam won’t even have a date to spend company with. And here’s where Archer steps up his game: Without even being asked, he offers to be Pam’s date to make things easier for her.

However, there are two problems. First, Archer promised to take care of AJ for the weekend so Lana could do survivalist training, and leaves without telling her. (Unrelated note: AJ is so much easier to say than Abijean!) But the bigger issue is Barry the cyborg planned to kill Archer that weekend, and after spotting Archer and Pam at the airport he can now follow them directly to the wedding.

Oh hey, Barry the cyborg, Archer’s arch-nemesis! Long-time fans will get a kick out of seeing him again, and it’s another great callback to the pre-Archer Vice days. But if you’re wondering “Wouldn’t this derail the entire wedding plot the episode is named after?” Why yes, yes it would. Before Archer and Pam even get to the rehearsal dinner, Barry kidnaps Pam as a hostage and takes her to an old grain elevator. Now what should have been a weekend of awkward conversations with Pam’s relatives is dropped in favor of an epic showdown between Archer and Barry. Not that I’m against epic showdowns but… isn’t the best place for that showdown at the actual wedding? You know, the one the episode is named after? Archer could even make jokes about the last wedding Barry wrecked that way. (Too soon?) 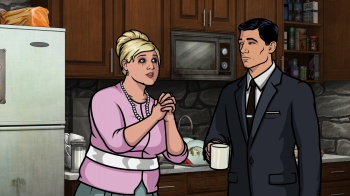 But I’m getting ahead of myself. It turns out being kidnapped was actually the second worst thing Pam went through that night. Edie swings by her sister’s motel room to see if they arrived, and she proves to be an irredeemably horrible person. Almost everything that comes out of her mouth is an insult to either Pam or Archer, and it quickly becomes clear only Archer can brush them off. Edie really does just want to destroy her sister’s feelings, and has for a long time. In fact, it seems like the only reason Pam was invited was so Edie could rub it in that she’s getting married first. This is the emotional meat of the episode and it works very well – Pam’s obvious emotional trauma, family problems, and Archer stepping up to repair their friendship, all tied together with the show’s typical brand of humor.

Or rather, that’s the direction it should have gone, but instead we get a massive cyborg fight. You know, I can’t believe I’m making a case for fewer cyborg fights, especially one as impressive as this. It’s brutal, funny, and peppered with dialogue showcasing how much they hate each other. This is the showdown Archer fans have been begging for since Season 3, when Barry was left behind in space instead of having the promised throw-down. Trouble is, it happens at the expense of letting Pam have a killer episode of her own. At least she gets a fantastic parting shot at Barry for her troubles, but I weep for what could have been.

Meanwhile, Lana is bouncing around the not-ISIS office, trying to find someone who can take care of AJ for the weekend. The interactions are brief, but funny, and well-worth taking 30 seconds to fit the entire cast into the episode. (My personal favorite is Ray’s thinly-veiled attempt to pretend the elevator is malfunctioning. “We’ll talk on Monday about how scary this was for me” almost had me on the floor laughing.) But the person who ends up helping is actually Cyril, who makes the very mature suggestion that he and AJ stay in a nearby hotel room in case Lana needs to check up on them. It’s a great character moment and seems like Lana and Cyril are moving forward… until he privately reveals it’s a ruse to get back in Lana’s pants.

You know, sometimes I actually try to like Cyril because he’s an interesting character that gets crapped on all the time. But it’s really hard when he gets so openly scummy.

The bigger issue, however, is one with the entire episode – Archer is spending way too much time basking in the glory of past seasons. Pam’s family visit is actually about Barry the cyborg. A frank conversation between Lana and Cyril hints they’ll get back together again. Archer Season 6 has been doing this since the premiere, mind you, but as jokes highlighting how everything’s changed. “Edie’s Wedding”, on the other hand, resurrects old plot points to interrupt what should have been more interesting moving forward.

I’m not sure I can hate Archer for that, considering it’s still the king of self-referential humor. But we’re finally hitting a point where fans could just rewatch the old episodes. Archer doesn’t need to be Vice, but let’s do something new.

Although that was a pretty sweet cyborg fight.

Bottom Line: “Edie’s Wedding” proves that Archer, while as funny as ever, may be spending too much time living in the past. A Pam-centric episode that could’ve been fantastic turned out to be a really good episode that happened to have Pam in it. There’s a lot of great details that make up for that, but if Archer keeps it up, it risks going stale.

Recommendation: Even when it recycles plot points, Archer is still one of the best shows on television. You should keep watching.