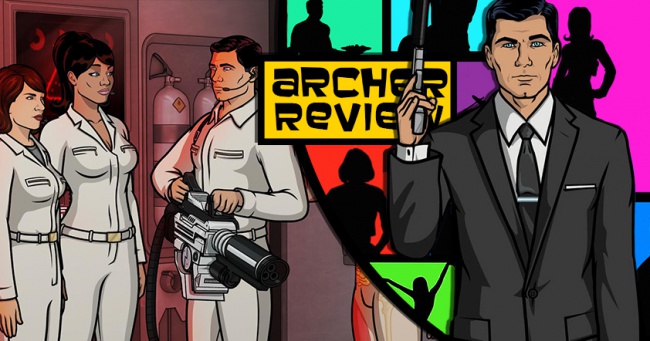 Archer Season 6 brings back the best parts of its spy parody roots – while still letting us laugh at the stuff that was stale.

Television was once a medium where nothing was supposed to change. Fictional worlds always maintained a status quo, and audiences could expect the same kinds of stories every single week. Obviously, Netflix and DVD re-releases changed that – but I can’t help but remember that period when it comes to Archer. Season 5 – otherwise known as Archer Vice – changed so many details that creator Adam Reed could easily have designed a completely different show. Not all fans cared for it, and Season 6 promptly brought back the original spy parody as though nothing happened.

Don’t get me wrong – I’m glad Archer is dealing with outlandish espionage humor once again. It’s far better suited to Archer‘s particular brand of political comedy, and simply more fun to watch unfold. But for the first few episodes, that was also Archer‘s greatest weakness – things were so similar that it felt like we watching reruns.

But the more things stay the same, the more they change. As much as Archer returns to past glories, it also takes the series in solid new directions. ISIS rebranded itself as a CIA freelance wing, letting the crew do its usual antics while putting a spotlight on real-world political issues. Archer and Lana’s relationship finally moved beyond making each other jealous over sexual exploits. And even though Archer is a spy with the mentality of an alcoholic twelve-year old, he still proved capable of growing up a little – at least just enough to be a slightly better parent than his mother was.

If that intrigues you at all – and it should – you can read our past reviews or watch Archer on F/X, Hulu, or Amazon without fear of the Spoiler Zone.

If Archer Season 6 has a single recurring theme, it’s literally revisiting the show’s roots… and yes, I mean literally. The premiere opens as Archer escapes his problems with drunken escapades. The finale directly parodies outlandish science fiction stories. Katya returns to seduce Archer, again. Barry returns to kill Archer, again. Ray cripples and mutilates himself, repeatedly. And let’s have a show of hands for everyone who thought “Three to Tango” was a retread of “Diversity Hire”. (Sorry, Conway Stern.)

If you were dropped into the show at a random point, you’d probably think this was Archer Season 3 or 4 – not Season 6. Reed knows it too: The office renovations in “The Holdout” are a metaphor for the entire concept, recreating the original right down to the things nobody liked. After flashing a gorgeous-looking hologram facility at us, it feels like a giant middle finger at the viewers who thought Archer Vice was terrible. And for a while that was a significant drawback of Season 6 – everything feels so similar to what we’ve already seen that you could’ve watched earlier episodes on Netflix instead.

Thankfully, Archer still finds managed to make its episodes fresh and exciting. After six years, the writing and performances have been refined to near-perfection, to the point that characters leave us laughing with a single word. Archer is also a master of self-referential humor – eclipsed only by Arrested Development – which means simply covering old ground is itself part of the joke. But as the season progresses a more subversive element comes into play – the characters start changing.

Babies do that to people.

Yes, one of the major driving points of Season 6 is that Archer is the father of Lana’s baby. And while that doesn’t stop Archer from being a secret agent man-child, it does mean the status quo can’t continue either. Which is completely fair – Archer and Lana wouldn’t be so likable if they harassed and snapped at each other like Season 1 while their infant played nearby. And while the process of these characters becoming friends has built slowly for years, it’s finally executed perfectly here – thanks in no small part to H. Jon Benjamin and Aisha Tyler’s amazing performances.

In short, Archer and Lana finally have to admit they have more in common then anger and betrayal. That all their sleeping around was more about making the other jealous. And that even when they weren’t dating, they’re practically family. Yes, after a certain point you don’t need to be a psychic to know they’ll start dating again – but it works. Seriously, go watch “Reignition Sequence” and tell me Archer’s speech doesn’t tug at your heart strings a little.

That’s the genius setting Archer apart from other animated shows. Yes, it’s ridiculous, raunchy, and uses its cartoon status to get away with offensive dialogue. But strip that all away, and what you’re left with are well-developed characters you genuinely care about. We may not relate to Archer’s action movie prowess, but we absolutely understand well-meaning people raised solely on pop culture. Not everyone is a weapons expert like Lana, but we sympathize when an overbearing grandmother thinks they know what’s best for your baby. We watch Archer for its rock-solid humor and writing, but we keep watching because we want to know what’s going to happen to the characters.

This extends to everyone in the cast by the way – the entire not-ISIS office staff are completely insane, but they’re also a family unit that depends on each other. Archer and Pam realize they’ve become best friends. Ray worries about accidentally offending Lana even though he’s suffered injuries. And everyone comes together to defend baby AJ, whether she’s been kidnapped by Krieger or an enemy agent. (Full disclosure: “Pam! Baby!” and her reaction in “Sitting” is my favorite part of the season.) Everyone may be horribly dysfunctional, but they’re an essential part of making this show work.

On the downside, Malory has a smaller role this season – but when she does arrive she’s as brilliantly cutting as ever. Never before has refusing to feed “overweight” toddlers been as funny yet disturbing as it in these episodes.

It’s also worth mentioning that Archer‘s animation team is doing some fantastic work for Season 6. Outside of amazing visual effects – that avalanche scene though – actual character movements are becoming surprisingly fluid and detailed. That means one area Season 6 excels in are impressive action scenes, from shootouts, to car chases, to full-blown brawls. We didn’t need Barry to come back, for example, but it was completely worth it for the massive throw-down alone. And the finale parodying Fantastic Voyage – including a scene where Archer fights white blood cells with a laser gun – wouldn’t be as exciting without the special effects backing it up.

Although to be fair, those same fluid animations make Archer and Lana’s sex scene a little bizarre to look at – but you can’t deny it’s a technical achievement.

The question now is where Archer will go with Season 7. Even if doing “more of the same” worked this year, that doesn’t mean it’ll stay fresh for another. Thankfully, the finale suggests that Archer is about to go in yet another bold direction – although whether it goes full-blown Vice with it remains to be seen.

Bottom Line: Archer Season 6 is a return to form for the series, taking the best parts of spy parody in new directions – while still making what didn’t work funny. More importantly, it’s proof that raunchy, offensive cartoons can still pull off fantastic character developments that anyone could fall in love with.

Recommendation: Archer is one of the best cartoons in production, if not best television shows in general. Strongly recommended.