I have dutifully played the Assassin’s Creed games as they’ve come out, and while it has wobbled a fair bit on the line of quality, it’s basically a solid series. At least it doesn’t churn out exactly the same tired thing every time. Just mostly the same tired thing every time, with some new ideas dipped into like a cowardly schoolchild dipping a toe into a frozen pool. Some of the new ideas it introduces mysteriously disappear in future instalments, never to be seen again, like bomb crafting and tower defence in Revelations, or all that sofa manufacturing business in 3. While other, less shit ideas grow and gain confidence. I wouldn’t be surprised if sailing was only in AC3 in that vestigial and ancillary way as some kind of proof of concept for AC4, in which case, fuck you, Ubisoft, for making us pay to be your focus testers.

But if there’s one thing about Assassin’s Creed that continues to wear upon the patience, it’s the connecting narrative set in the future with Future Desmond (although actually now set in the recent past, that’s what happens when you start off with a future date too close to the present). It seems like the series could just be about exploring various historical settings without having to bring us back to the future every now and again. I say this because it’s pretty clear at this point that the future narrative isn’t really going anywhere.

Now, despite having played every Assassin’s Creed I should mention at this point that I only have a loose grasp on what the ongoing future plot has been about, broadly speaking, perhaps owing to some overestimation on Ubisoft’s part of the human mind’s capacity for contrived bullshit. But I’m fairly sure that at one point the big overarching threat was a solar flare that was going to kill everyone, and which could only be prevented by the use of the super magic technology left behind by a fairly standard ancient highly advanced civilization.

So by the time of Assassin’s Creed 3 this whole subplot was coming dangerously close to needing a payoff, because you can’t just hang the solar flare over our heads for eternity, saying “Ooh watch out it’s going to come ANY SECOND NOW.” That has never worked for the Jehovah’s Witnesses and it’s not going to work for you, not after 5 games. So the solar flare problem gets wrapped up at the end of 3 in the blandest possible way – perhaps we shouldn’t have expected anything else of Future Desmond, blandest sentient life-form in the history of civilization – by pressing a magic button. 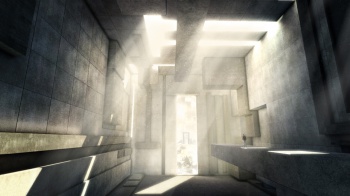 How Ubisoft must have wiped the sweat from their brows in relief now that the plot has nothing so clear-cut as an upcoming solar flare for its method of drama-building timekeeping. Now they’re free to fritter around half-heartedly setting up some majestic struggle or another for the rest of our bloody lives. Assassin’s Creed 4 represents them starting as they mean to go on, because the first thing they do is assuage any fear we might have that the death of Future Desmond might impede the ongoing plot at all. It seems that immediately after his death the evil corporation were able to cut his brain out and extract all the genetic memories the series will ever need. There’s even a document you can find where they list off a whole bunch of possible historical settings. Including the French Revolution, which I remember saying when the last game came out would have been a much better setting, but I digress.

One wonders why the evil corporation bothered keeping Desmond alive if they could have gotten what they wanted just as easily from his dead brain. Maybe they just had trouble telling the difference between a braindead Desmond and an alive, characteristically bland one.

But I digress, again. The second thing AC4 does is have absolutely bugger-all happen during the future segments, except for hints at things possibly maybe happening in the future some time. Don’t want to make that solar flare mistake again by making some definite announcement that something’s going to happen, it might jeopardize our chances of getting another eighteen of these games out before 2020. And my point is, the more effort this series makes to keep the future plot ongoing, the less interest I have in it.

Last week I mentioned that I’m not a reader of superhero comics, but more accurately, I’m not a reader of any ongoing comic series. Because I was raised with a traditional education, which stated that a story only becomes a story when it has a beginning, middle and end. What doesn’t work so well is when the story has a beginning, middle, more middle, something we thought might have been an end but was actually middle in disguise, then a reboot back to the beginning because we couldn’t draw the middle out any longer.

And then the series gradually becomes this horrible maelstrom laughably referred to as ‘canon’, with all kinds of characters and returning characters, and the regulars have so much history jammed into their ongoing lives, and also retroactively into their pasts, that they would technically have to be about ninety-seven to fit it all in. It becomes virtually impossible for newcomers to be able to get into if they don’t have the time commitment to go through it all from the beginning.

You let a story run on too long, it takes on a life of its own. It develops this strange sense of self-preservation, keeping things forever in the status quo. And the other problem is that it’s like bringing a prospective dating partner home for a game of strip monopoly – the longer you let it go on, the less likely it will end in a way that anyone will find satisfactory. I mean, look at what happened when they ended the Mass Effect series. That’s if you can still see it under all the poo everyone flung at it.