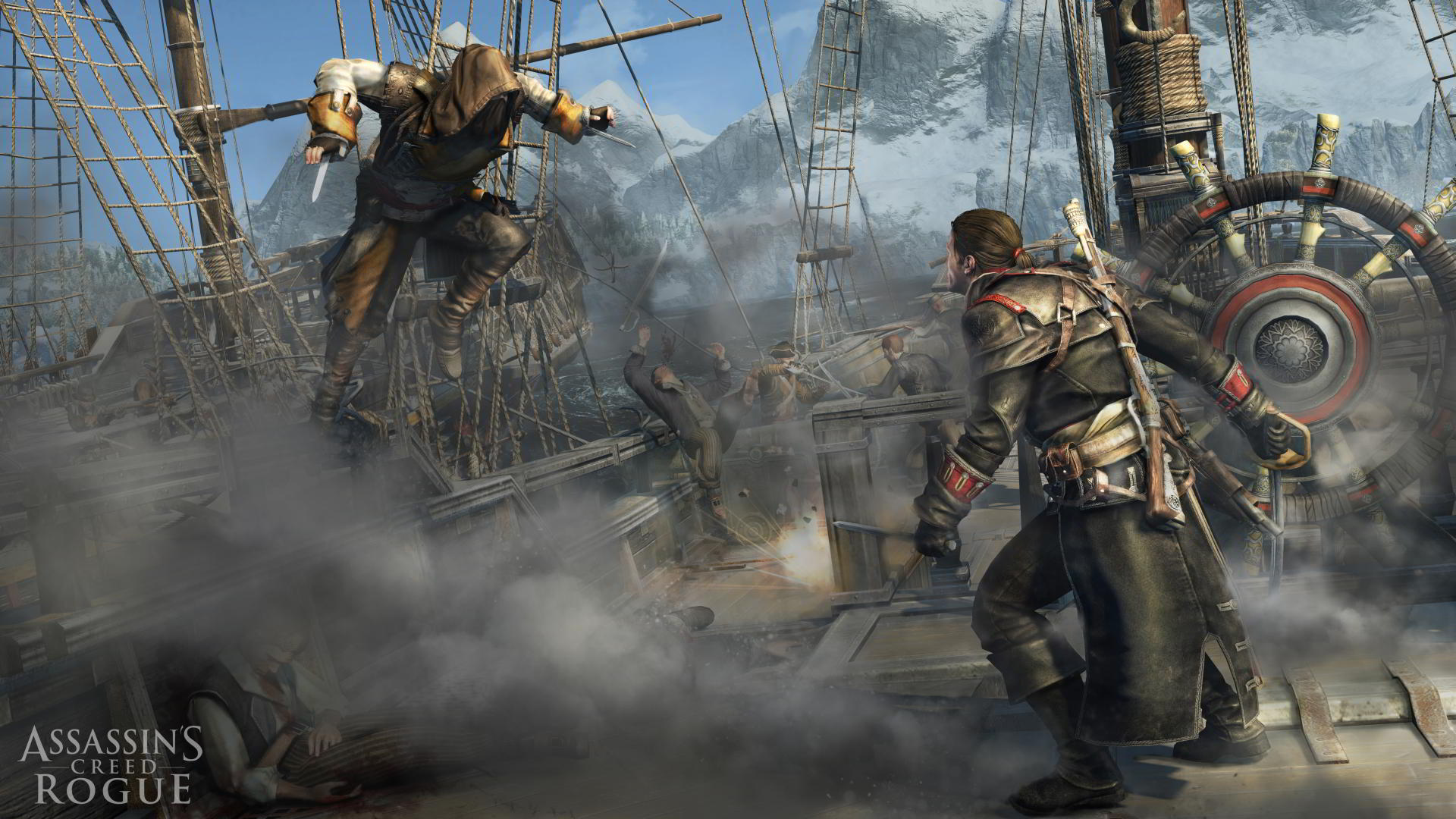 Where Assassin’s Creed IV: Black Flag left off with Edward Kenway sailing away from the Caribbean circa the early 1700s, Assassin’s Creed Rogue picks it up during the Seven Years’ War, which started in 1756. With war raging between Britain and France, you, Shay Cormac, an Irish-born former member of the Assassin’s Brotherhood, have chosen your allegiances. You’ve sided with the Templars in their ongoing war with the assassins, and you fly the British flag in opposition to the French naval presence in the area.

Rogue seems to be Ubisoft‘s answer to the less-than-total adoption of the newest generation of consoles. With Unity being a next-gen exclusive, Ubisoft stood to miss out on over 150 million last-gen console owners out there with its release, and Rogue addresses that expertly. Additionally, Rogue isn’t trying to turn the gameplay convention on its head like Unity is, instead focusing on improving the known and loved gameplay of Black Flag.

While this is certainly your first ever opportunity to play as a Templar, which comes with its own perks, like not having to worry about killing civilians, since your ancestors apparently did do that, the gameplay itself is just more of what you’ve spent hours on in AC IV. And please don’t misinterpret what I’m saying here, this is in no way a bad thing. Black Flag was basically a masterpiece, and Ubisoft is just pushing the limits on the beloved mechanics.

As before, you’re no longer a pirate on the high seas, instead you’re a pseudo-soldier on the British side of the Seven Years’ War against the French. Your ship is the Morrigan, a slightly smaller, faster, more maneuverable ship than Kenway’s Jackdaw. You’ve got improved weapons on board, like the burning oil which you can pour behind you, which burns and slows ships that touch it. It’s a great way to slow down someone attempting to ram you, and a quick turn and volley will often be devastating. Additionally, you’ll have an old-fashioned machine gun sort of thing, which lets you not only hit weak spots on opposing ships, but you can fire freely, and take down smaller ships with nothing but.

You’ll have points of interest, much like Black Flag, like heavily defended French fortresses that you can claim on behalf of the British Empire, akin to the forts from AC IV. Likewise, there are areas controlled by the Brotherhood that you have to liberate by completing a number of tasks within the zone. After taking out the lead assassin, you’ll wrench control from the enemy and make the area safe for you to wander about.

The assassins are going to present a bit more of a challenge than your average guard or pirate, though. They’ll have all the same tricks and tactics that you’re accustomed to wielding. They’ll blend into crowds, stalk you for ages, careen along the rooftop, until the opportunity arises for an air assassination. Next thing you know, you’re on your back at 20% health, and your foe/prey is fleeing back into the crowd to set up his next assault. I didn’t get to experience this stalker mechanic personally, but what I saw in the demo definitely looked intriguing. You’ll have to outthink, outsmart, and outmaneuver the assassins, but dispatching them is all the more gratifying for it.

Then, of course, given the open seas, you’ve still got the opportunity to collect shanties. These aren’t all your pirate shanties, although they are bringing back some fan favorites, rather they’re focused on Shay’s background, offering Irish songs and music, along with the possibility of some New World music representing the locale.

Whether you’ve been eager to play as a Templar since your first kill as an assassin, or you downed all four legendary ships in Black Flag but still want more, Rogue is going to have something to offer anybody still willing to power on their Xbox 360 or PS3. The new Air Rifle (complete with Noob Tube attachment for maximum carnage) and burning oil will add new dynamics to gameplay that will keep the familiar gameplay fresh and exciting.

Assassin’s Creed Rogue is under development by Ubisoft Sofia, and published by Ubisoft. It is slated for a November 11 release on Xbox 360 and PS3.