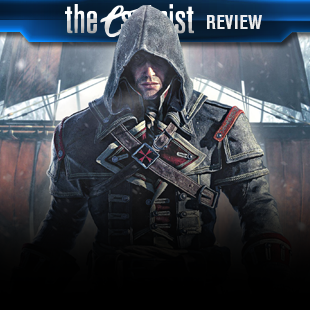 Despite its launch being almost completely obscured behind the next-gen-only Assassin’s Creed Unity, the Rogue experience deserves a bit of recognition. While it’s nothing new, the Black Flag formula worked once, and it’ll work again, even if it does suffer some diminishing returns. A compelling story line and seemingly endless side activities to engage with make Assassin’s Creed Rogue a strong follow-up to last year’s hit Black Flag, but it falls behind its predecessor a bit in the relatable characters department, and suffers from repetitive combat.

Rogue puts you under the hood of Shay Cormac, a distinctly Irish member of the Assassin brotherhood. He’s a bit unorthodox in how he follows instructions, but he does aim to get the job done. As you no doubt know if you’ve seen any of the pre-release info about the game, something happens to Shay which causes him to reconsider his allegiances and, eventually, completely abandon the Assassins. While it was seemingly an effort to humanize the protagonist, the abrupt about face in loyalty was a little jarring all the same. An elite assassin whining about people dying just seems a tad peculiar. It does at the least help propel the story forward into more interesting territory.

While Black Flag had a Caribbean flair, North America is the setting for much of Rogue. The French and British forces are engaged in the Seven Years’ War as you set about your mission of hunting your forsaken brothers, and preventing the Assassins from committing further atrocities. One of the steps backward that Rogue seems to have taken is a lack of identity for many of the locations. In Black Flag, most of the bigger locations were somewhat memorable, having been tied in some way to major story or character developments. Rogue‘s locales are more of a mixed bag and, while you may remember your time in New York City, that may well be the only place that really sticks with you.
Despite being more or less the same game with new characters and maps, Rogue is also somewhat less polished than its predecessor. Watching an enemy fall down dead mid-fight, only to realize a moment later that Shay is now stuck in the middle of an attack animation on a set of stairs, is obviously frustrating, but at least with the autosave system, you won’t stand to lose that much progress when it happens. You’ll also likely encounter various objects scattered throughout the game that don’t seem to have been properly programmed to jive with free running mechanic, offering you an impassable hurdle that must be skirted before you can resume your pursuit. It’s fairly minor, admittedly, but Black Flag set a high precedent for polish that Rogue doesn’t quite live up to. 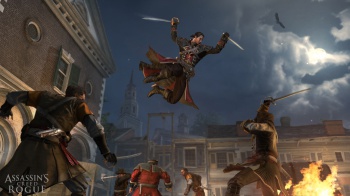 Rogue has a few tricks up its sleeve, at least. There are new additions to your ship’s arsenal, like replacing fire barrels with burning oil, which seems to be significantly more effective at deterring a ship at ramming speed. You’ve got new toys to play with on the ground as well, like the firecracker dart, which attracts enemies to it, allowing much improved access to some of the more heavily guarded locations. There are even new sorts of enemies, namely assassins prowling through the alleys, looking for their opportunity to strike. They don’t get to one-shot you like you do them, but the air assassinations and similar moves will leave you with virtually no health, making you incredibly vulnerable to a follow-up attack. The new elements are minor compared to those that were borrowed from Black Flag, but they do a lot of work in keeping Rogue from becoming too samey.

Aside from the new toys you get to tinker with, the combat — both naval and melee – are more or less unchanged, which can make the whole experience start to drag on, at least for those of us who played way too much Black Flag. Naval combat in particular was already getting repetitive by the time you closed out Black Flag, so without major overhauls of the systems, it more or less begins at “repetitive” with Rogue and only gets worse from there. All that said, outclassing a superior naval force still feels like an accomplishment, even if you are just boarding and repairing over and over again to keep yourself afloat. The exclusion of a Kenway’s Fleet sort of system does hinder Rogue a bit, however, as one big driving force at continuing to fight battles at sea in Black Flag was improving your fleet, and taking on more challenging missions.

On-the-ground combat, on the other hand, seems to have become a bit more dynamic with Rogue, thanks in large part to the new weapons at your disposal. Whether you’re lobbing grenades or hanging guards with your Rope Dart, Shay’s personal arsenal has definitely spiced up the sometimes-mundane hand-to-hand fighting. You’ve still got your old favorites like Berserk Darts to create havoc among the enemy ranks, but if you’re feeling particularly ambitious, you can actually tag a guard with a rope dart from a tree branch and hop off the other side, hauling him up as you descend. It may not be the most subtle approach to assassination, but what’s a professionally trained killer without a bit of flair?
What Assassin’s Creed Rogue lacks in ambition, it makes up for with its rich gameplay inheritance. It may be more of the same, but given that the source material was a genuinely stellar experience, Rogue should prove an enjoyable experience for most series fans out there. It has a lot more value for anyone that missed out on Black Flag, but the familiar characters and plot elements will help to keep even those who 100%’d AC4 engaged for quite a while. If you did all the side activities as Kenway, you’ll not likely want to do so again here, but there’s plenty of other fun to be had just in progressing the story.

Bottom Line: Assassin’s Creed Rogue is gameplay-wise more or less an unofficial sequel to Black Flag, in that it inherits virtually every enjoyable element from last year’s title. The combat can be a bit repetitive, which is particularly true for those who played AC4 extensively, but it’s a solid last-gen entry in the series all the same.

Recommendation: If you’re invested in the overarching Assassin’s Creed story, Rogue will fill in some very important gaps for you. Similarly, if you missed out on Black Flag last year, Rogue offers the same fantastic gameplay, with only minor apparent flaws.