Police constable Cactus’s small, one-user ship drifts alongside a mammoth of a freighter, lined with cargo containers, as lasers begin spewing concentrated fire. The ship bobs and spins, slipping between the lasers with reckless abandon. Cactus calmly hurtles into danger with gleeful ignorance, while dispatch desperately tries to reign her in. “This is beyond the scope of the operation. I’m advising you to abort the mission, and retreat immediately!“

“And submit a mission failed report? I hate those forms!” And then she slams her frigate straight through the hull of the cargo ship. 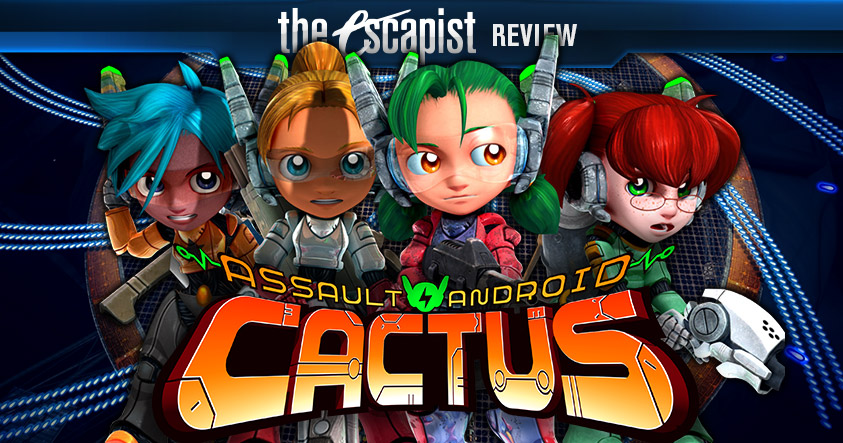 Assault Android Cactus is an arcade-style twin stick shooter, starring a small cadre of androids caught in a ship full of murderous robots. They must trek through the ship on foot, surviving thousands of robot assaults in the process, and before reaching the four section bosses, and finally the overlord AI, the Nexus Core. Each of these bosses has their own section of stages, each stage a unique room layered with hazards and bursting with its own aesthetic.

Consequently, it’s gorgeous. Although simple, the game has a well defined style that packs each screen with energy and vibrance without relying on a bright neon aesthetic to set the tone. It feels appropriately sci-fi for an android staffed shooter, including the exaggeratedly cute character designs, but with the enemies born of the rough grit of a working class robot force in what should be an industrial freighter. Not all of the stages make much logical sense for the setting, but the ship is home to a lot of diversity in stage type and shape, and has unique mechanics sprinkled throughout to keep the play interesting across the five to six hour campaign. 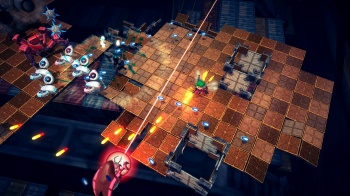 In motion, Assault Android Cactus feels like a desperate gambit for survival. Early stages are light on opponent robots, giving the player time to settle in with the mechanics and try out various characters to find one they love. Later stages pile the threats on very quickly, and the fields of battle will rapidly flood with bullets and fire. Although individual bullets are very little threat for any of the androids, thanks to a small reservoir of regenerating health, too many bullets at once will take out even the most alert player. Androids who collapse aren’t killed, they are instead knocked over, lose a bit of charge to their weapons, and drain a little battery. The battery serves as both a quasi-health bar, as well as a timer. As each mission wears on, the androids are steadily draining themselves of battery power, and will lose the mission if they run out of battery. Each wave of enemies will produce a battery power-up that gives a small bonus to the battery meter.

As stages grow in number, your playstyle will steadily turn from “don’t get hit” mindset to “which of these bullets can I survive in getting a better position?” The robots never slow down, nor do the challenges, and the threats keep mounting, so play turns to calculated recklessness. It is, despite the challenges, a gleeful experience. The soundtrack and jubilant energy are infectious, which makes snap decisions against the hoards a rewarding experience.

It is likewise a mind-numbing, challenging experience. Certain attacks are one-hit kills, there’s never much of a sense of invulnerability, and the final stages are brutally unforgiving. The final boss in particular will likely make up about an hour’s worth of the total time spent on the campaign. Assault Android Cactus, with the cute aesthetic and bouncy energy, really hides its difficulty, and players hoping for something light and fluffy could find themselves disappointed by the hell-beast of bullets and death that emerges more and more across the 25 stage campaign.

The five bosses are likewise unyielding, each with a final form chocked full of potential murder mechanics, and the slowly draining battery serving as the hard limit to each stage, it means that bad runs will start to drag after enough repeated efforts. Each successive boss also gains more forms, and must be restarted from the beginning every time the battery depletes. In addition to challenging bosses, the difficulty curve spikes sharply in the last five or so stages; which brings its own kind of fun, if making noises somewhat akin to “hrfnc hnf” and tossing controllers qualifies as fun.

Difficulty aside, though, it’s hard to find much to criticize about Assault Android Cactus. The aesthetic is goofy fun, the mechanics are polished and vibrant, the bosses have different dialog options depending on the chosen character, and each of the characters have clear personalities and voice work. Even during the campaign, the game feels like a favorite arcade. The stages are mostly short, punchy from beginning to end, and the six hour running time never overstays its welcome.

Like Cactus in the opening sequence, the ultimate result of Assault Android Cactus is looking at the relentless danger, thinking “I’ll take my chances with the lasers,” and wading into the chaos. Reckless, gleeful, and a really hard, incredibly good time.

Recommendation: Definitely an easy buy for shooter fans, but might be a bit too hard for new players to the genre.