It’s hard to look at Attractio and not think of Valve’s classic puzzler, Portal. From the test chambery style levels, to the voice on the loud speaker that oftentimes berates the characters as they attempt to solve the room’s puzzle, to the puzzles themselves that force you to rewire your brain to think within the confines of the game’s world; it all feels very reminiscent of Chell’s journey through Aperture Science. 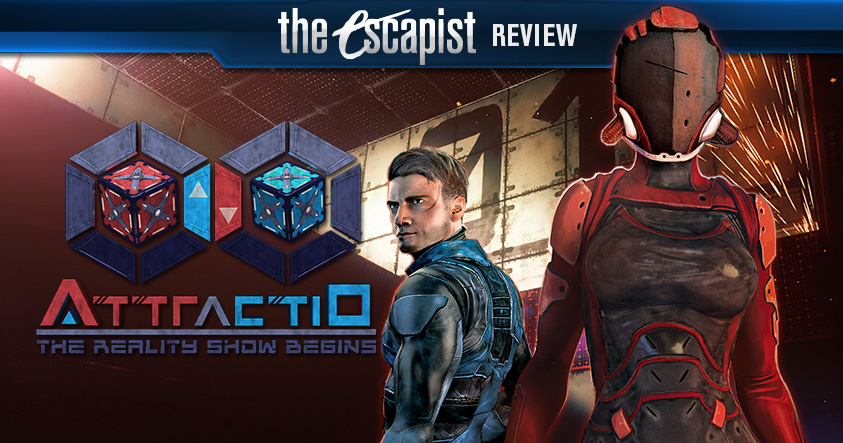 But while Portal was able to tie together its brilliant puzzles in an entertaining, cohesive, and memorable package, Attractio struggles with just about everything that isn’t related to the core puzzle mechanics. A shame, because the core puzzle mechanics in Attractio are fantastic and contribute to some incredibly creative, thought provoking, and immensely satisfying puzzles, even if some of the later ones get a little too crazy. 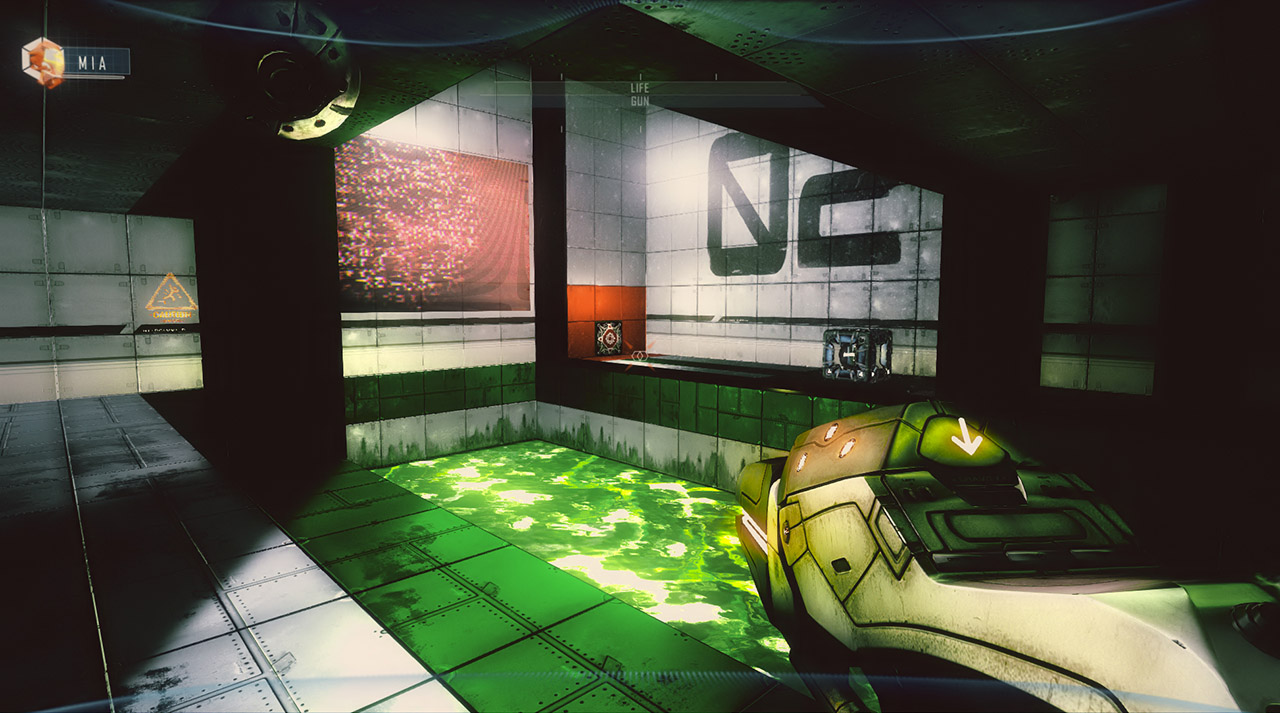 The premise of the game involves three characters — Dalek, Mia, and Keir – who are all contestants in a space reality show called Attractio. The show challenges its contestants to complete death defying puzzle rooms, with the winner being able to choose a grand prize that can either grant them their freedom, a whole bunch of money, or advanced technology. The premise of the story is fine, but it is delivered with some of the worst voice acting in the last decade of video games and further compounded by extremely awkwardly written dialogue. It’s enough to wish that the game was just a series of puzzle rooms with no context linking them together.

Even if you did want to listen to the characters, the game has this annoying habit of cueing up dialogue right at the end of the level, and then immediately cutting it off once the game starts loading the next level. Prepare to also hear the same intro to a level repeated several times if you wind up dying before triggering a checkpoint.

Gameplay wise, Attractio is all about gravity and the different ways to manipulate it. There are a number of different tools at your disposal, with certain characters only having access to specific abilities. Mia for example, only ever gains access to the gravity boots, which allow her to reverse her own polarity and walk on the ceiling. Dalek and Keir, on the other hand, eventually gain access to a gravity gun, which gives them the ability to change the direction that gravity affects a crate, making them capable of sending objects forward, back, side to side, and up and down. 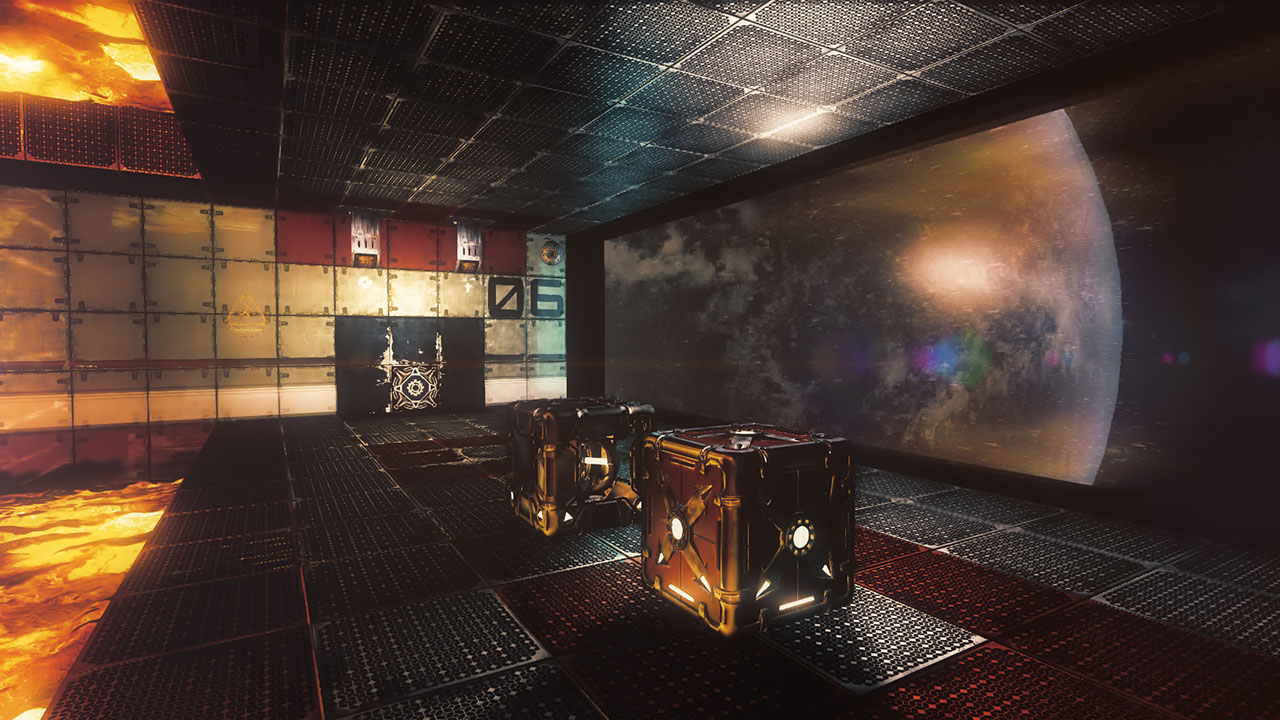 As you might imagine, this makes puzzles rather mind bendy, and Attractio does a good job of constantly introducing new ways to utilize your abilities in unique and oftentimes surprisingly clever ways. Like attaching a block to a wall, then jumping on it to ride the block down like an elevator, preventing fall damage. Players can also create zero gravity objects by having two crates collide with opposing gravity or an elevator by stacking three blocks, standing on top, and then changing their gravity so they all shoot upwards.

Towards the end of the game, the game switches things up by having you control two characters at once, forcing you to utilize both Mia’s gravity boots and Keir’s gravity gun in conjunction with each other in order to solve incredibly complex puzzles. To be honest, I would argue that the last few puzzles are almost too complex, with some of them requiring a frustratingly precise level of precision that made me think I was on the wrong train of thought, when really, the problem was simply the fact that my block placement was a millimeter off.

Attractio looks fine for what it is, but I had a lot of problems reviewing it on PC with performance issues. Visual glitches were frequent, I had frequent framerate stutters, and while my computer isn’t exactly top of the line anymore, I’ve played much more graphically intensive games with far less problems than Attractio. The game is also available on PS4, but I can’t comment on the stability or performance of that version.

There are some sharp and rough edges in Attractio, but if you can get past them, you’ll find solid puzzle game with great core mechanics that are put to very clever use. It certainly could have benefitted from a little more polish and a deeper dive for voice talent, but those looking for a new game to exercise their mind might want to consider making their brain do somersaults by playing Attractio

Bottom Line: Great puzzles that are unfortunately marred by sub-par presentation with cringeworthy dialogue and voice over.

Recommendation: Die-hard puzzle fans that are always on the lookout for ways to give their brain a workout may want to give Attractio a shot. Others may not be willing to look past the game’s glaring surface flaws.